From FGSS major to arch-nemesis of Milo Yiannopoulos and the Alt-Right. 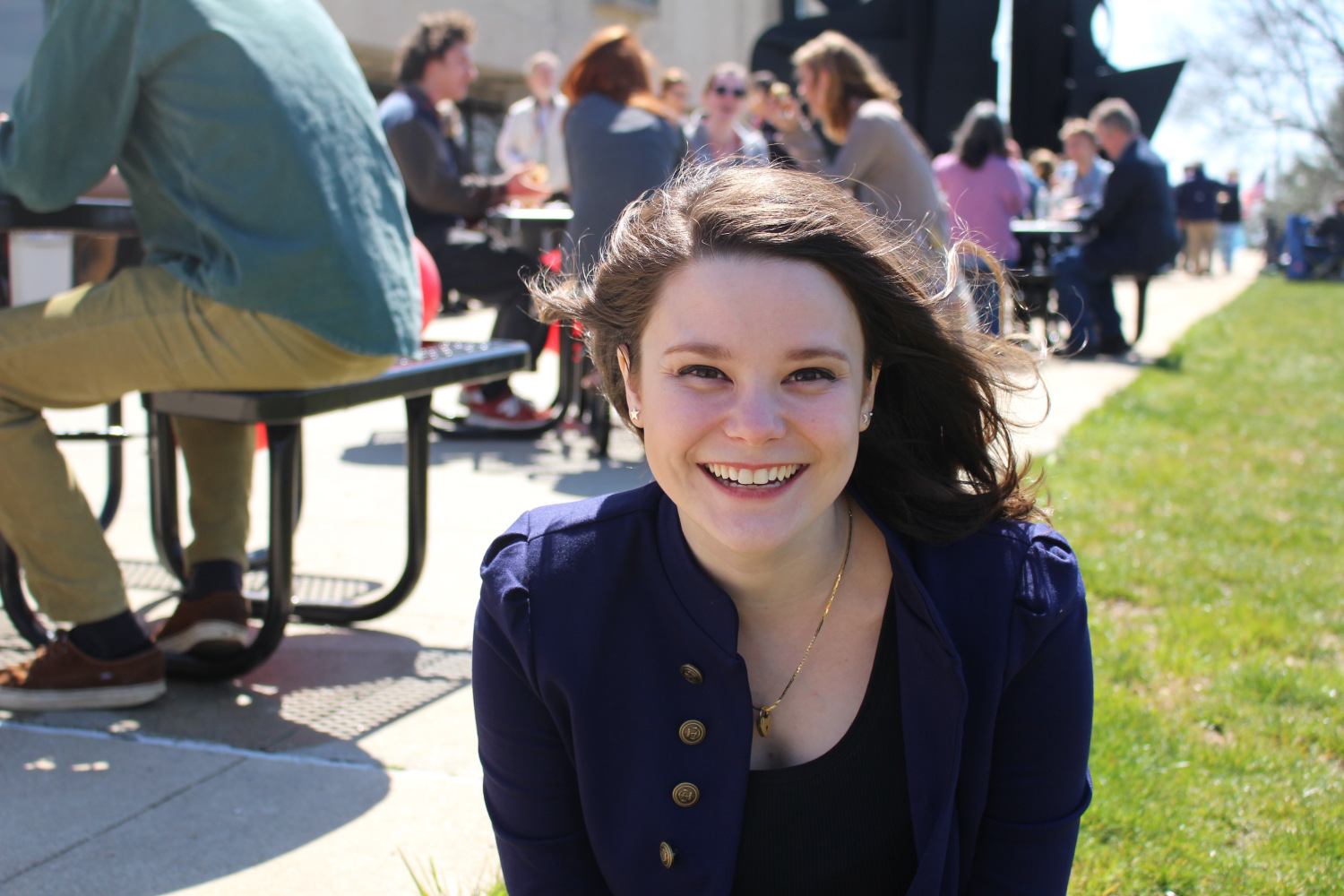 Ella Dawson ’14 is a social media wizard for TED by day and a sex writer by night. A few days ago, Dawson arrived home from work around 5 p.m., opened her mailbox, and saw a letter from former Secretary of State Hillary Rodham Clinton.

Dawson assumed that the letter was soliciting another donation, but upon opening it, Dawson quickly realized that this was not the average campaign correspondence.

“As you point out, the Internet is not a friendly place for women and you are not alone in facing the relentless onslaught of baseless, personal attacks,” Clinton wrote. “As I mentioned in my speech in Reno, there’s an old Mexican proverb that says, ‘Tell me with whom you walk, and I will tell you who you are.’ I’m proud to walk with you, Ella.”

Clinton was referring to Dawson’s viral personal essay on Medium, “Hillary Clinton, The Alt-Right, And Me,” which documents Dawson’s struggles with online harassment as a sex journalist who writes about her experience with herpes and its stigma. Dawson’s harassment has reached such a scale that the infamous Breitbart writer and alt-right super villain Milo Yiannopoulos has even encouraged scores of Twitter trolls to bombard her with threats and insults.

The Argus got in touch with the former Feminist, Gender, & Sexuality Studies major over email to discuss Clinton’s letter, online harassment, and more.

The Argus:  What was your reaction when you realized that the letter from Hillary Clinton wasn’t soliciting another donation but in fact honoring you for your work?

Ella Dawson ’14: I was totally stunned. When I wrote my essay on Medium, I never expected Hillary to read it, or even hear about it. I’m not a journalist or a celebrity or even part of her campaign—I’m just a blogger who has seen some hell online. For her to have read my essay and then taken the time to write to me was incredibly moving. It’s recognition and support at a level I never thought I would achieve at any point during my career. I’ll be honest, I started sobbing.

A:  Can you give us an idea of the scale of harassment you face on the Internet?

ED: I’ve experienced four or five viral waves of harassment, which looks something like this: Imagine strangers are texting you directly to call you a whore, a degenerate, a c*nt, telling you that you should kill yourself, every 30 seconds. Sometimes that goes on for 24 hours, sometimes three weeks. There are entire threads on 4chan and Reddit devoted to dissecting how ugly I am. People have harassed my dad on Twitter. The worst are the YouTube videos where men scream about what a filthy slut I am. It’s agony by a thousand slurs. Well-intentioned people say “Don’t read the comments!” and “Don’t let it get you down!” but it has a serious impact on your mental health and perception of your safety. At this point I have a sense of humor about it because I’ve experienced it so frequently and can anticipate when it’s going to hit, but when I first started blogging and getting heat, I was absolutely terrified.

A:  What are some things you’ve proposed to make venues like Twitter or your blog free of harassment?

ED: No comment is published on my blog without the approval of an administrator, so either myself or my editor Gabe Rosenberg ’16. In an ideal world, I think all websites would have moderated comment sections or no comment sections at all. I also occasionally turn the keys of my social media accounts (my Twitter and my official Facebook page) to Gabe and some of my other guy friends when I’m getting a wave of harassment so that they can block the people attacking me and keep an eye on my safety.

There are a million changes Twitter could make to create a safer environment for women, people of color and non-binary folks, but the best way to start would be getting rid of the worst offenders who direct harassment campaigns. They recently removed Milo Yiannopoulos at long last, but most of the men who have tormented me online are still prominent members of the site with hundreds of thousands of followers they entertain by mocking feminist activists.

A:  How have your politics changed since high school, and what role did Wesleyan play in the formation of the views you hold today, particularly in the realm of sex positivity?

ED: I’ve always been liberal and grew up as one of the only Democrats in deep red Connecticut. I also became interested in sexual health as a teenager, long before I became sexually active and long before I contracted an STI. I’d say that I became a bit more radical at Wesleyan as I learned about feminist theory and the many nuances of institutionalized oppression. Running [campus sex magazine] Unlocked and writing my thesis on feminist erotica was probably peak radical feminist for me. But graduating has also brought me back toward the center, not in terms of my values but in the way I pursue change. Progress is incremental and slow. That doesn’t mean we have to stop dreaming, but leaving Wesleyan is a huge reality check, and I say that as someone who works for a progressive non-profit.

A: What do you think you were like when you were a Wesleyan student?

ED: I was an arrogant little asshole, and I still am. But in all seriousness, my Wesleyan years come down to Before Diagnosis and After Diagnosis. Before I was diagnosed with herpes (and left an emotionally abusive relationship at the same time), I was an untested rebel without a cause with a ton of white and class privilege. Going through a series of traumatic events in a tight window of time made me much stronger and much more useful to the people around me. But I’m very glad I graduated when I did—the conversation about sexual assault and fraternities blew up during my senior year, and it felt like a deeply unsafe time to be on campus as an abuse survivor not yet ready to speak (or more accurately, write) about my experiences. I harbored a lot of pain when I graduated, and it’s easier to love Wesleyan now that I’ve healed those wounds.

A:  Which three things do you miss the most about being on campus?

ED: I miss WesWings, every day, always. I miss the endless possibility of a Friday evening on Foss Hill. And I miss having my favorite people in the world less than five minutes away in every direction. I took them for granted.

A: What did you see yourself doing professionally the closer you got to graduation?

ED: I thought I was going to become an editor at an erotica publishing house. I did land an internship with Cleis Press, previously the foremost erotica house in the United States, right after graduation. Five days after graduation, I moved to San Francisco to work for them. Pro tip: Moving to a city where you know no one for an unpaid internship in a dying industry right after leaving the only place you’d considered home is a dubious plan at best. I’m glad I ran hard at my goals and could make the educated decision to chuck them when they weren’t what I expected. Now I write erotica professionally on the side and enjoy my amazing and stable career doing non-profit social media.

A: Tell us about your work at TED.

ED: I manage TED’s Facebook and Twitter pages, and I assist with our other social platforms. TED is a wonderful place to work—I’m surrounded by English majors who want to make the world better. It’s also probably the only organization in the world who would cheerlead one of their interns-turned-assistant-turned-manager as she writes about having genital herpes.

A: Do you ever think about the archive of content you’ve already created about your experiences online, and what do you think people will make of it in the future?

ED: I’ll either be the classic example of my narcissistic generation or a great primary source for how young people negotiated sexuality and self-representation as a means of activism at the turn of the century. Mostly I think about which of my tweets isn’t going to be funny 25 years from now.

A: What would you tell an aspiring journalist or someone who wants to write about their experience in the way you do?

ED: Do it. Seriously, do it. Start that blog, or start pitching to publications you like. It’s so much easier to begin than you realize—the hard part is continuing to do it when you get tired or burnt out or distracted. I started my blog as a way to review erotica anthologies during my senior year of college. Yesterday I got a letter from Hillary Clinton in the mail thanking me for my work. Protect your privacy and don’t feel the need to share any more than you want to, but do it. You have something important to say.