Colin Kaepernick’s Action Speaks to Our Judgment, Not His 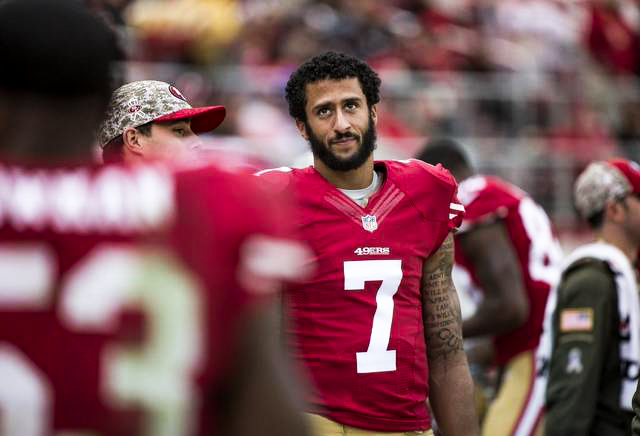 While thousands stand and place their hands over their hearts, Colin Kaepernick sits down. Entitled, childish, and unpatriotic? Perhaps. Unconstitutional? No. Despite what one may feel personally about his actions, Kaepernick’s right to protest as a citizen of the United States is at the very foundation of our Constitution. Liberties are often taken for granted in this country, and the ability to speak one’s mind is one of the most patriotic freedoms that the United States offers.

The concept of athletes using their platforms to advocate for issues of social justice is not something new to 2016. Forty-eight years earlier, the story was similar when Tommie Smith and John Carlos enacted a black power salute while on the podium at the 1968 Olympic Games.

Muhammad Ali’s image also suffered dramatically when he spoke out against social inequalities in the United States, but he continued to be the poster boy of striving for justice.

“The negro in America, you’ve put fear in him ever since he’s been here,” Ali said at the time. “And the only thing you hope is that it’s instilled in me, but it ain’t.”

There is a double standard when you incentivize athletes to speak out about problems going on in the world, and then demean their voices once they do have the confidence to express a controversial opinion.

The real disturbance is that we still have to call attention to racial issues that continue to plague our country; that is what is truly unpatriotic in this situation. The 49ers quarterback is just another black athlete whose voice has been silenced.

Kaepernick’s social activism is not far from Martin Luther King, Jr.’s March on Washington or Rosa Parks’ bus protest in Montgomery, Ala. While some see it as disrespecting the flag, Kaepernick is addressing the faults within society in a necessary and direct manner.

“I am not going to stand up to show pride in a flag for a country that oppresses black people and people of color,” Kaepernick said.

Yes, there are many ways in which Kaepernick could have expressed his feelings. The media scolds black members of society when they take their frustrations out violently. Black individuals are told to protest peacefully, and when they do, many still have problems with it.

“Why are we, as sports fans, continually surprised when one of our heroes turns out to be a real person, with real feelings who is living in the same world we also live in?” wrote Gerald Harris of The New York Times. “And when that athlete is black, why does white America respond with anger, as if the hero has broken some kind of sacred rule or understood deal?”

Kaepernick stands to make over $15 million this season, so why is there merit to a wealthy, famous sportsperson taking a controversial stand for social justice?

Marginalized communities need individuals like Kaepernick to take gambles and continue to publicize discourse on these hot issues. He risks losing his job and millions in endorsements, not to mention that his locker room friendships could become severely tarnished. Kaepernick should be lauded for his risk and respected for his courage, rather than being called a half-black, privileged bigot.

The flag and the national anthem certainly embody our soldiers battling to protect this nation and our law enforcement fighting to preserve safety within our borders. Conversely, there are stains on the flag that represent Eric Garner being choked to death or the bullet that took the life of Tamir Rice.

Francis Scott Key was a proud proponent of slavery, and because we only sing the first verse of the anthem, the vitriol and hate in the rest of the lyrics go unnoticed.

“And where is that band who so vauntingly swore that the havoc of war and the battle’s confusion,” wrote Key, speaking to blacks who joined the British and were promised freedom if Britain triumphed in the War of 1812. “A home and a country, should leave us no more? Their blood has washed out their foul footsteps’ pollution. No refuge could save the hireling and slave from the terror of flight, or the gloom of the grave: And the Star-Spangled Banner in triumph doth wave, o’er the land of the free and the home of the brave.”

It is unfair to promote the positive symbolism of the flag, but then also ignore all of the injustices that accompany it. Some of the freedoms that our troops provide are not extended to minorities. In the minds of many black individuals, non-compliance is associated with mortality, and this needs to change. There is a legitimate fear of death when a black person gets pulled over for speeding that a white individual could never even imagine.

“To me, this is bigger than football, and it would be selfish on my part to look the other way,” Kaepernick told NFL Media. “There are bodies in the street and people getting paid leave and getting away with murder.”

Let’s not forget: Alton Sterling was shot while selling CDs on the street, but after murdering nine innocent people in Charleston, S.C., Dylann Roof was not only taken alive, but was brought to Burger King by police immediately following his shooting because he was hungry.

Something needs to be adjusted, and it starts with the acknowledgement that equality is nowhere near established in American society. Let us stop discussing the validity of Kaepernick’s choice to sit during the anthem, and instead use this protest as a trampoline to analyze the disparity in treatment of races in the United States.