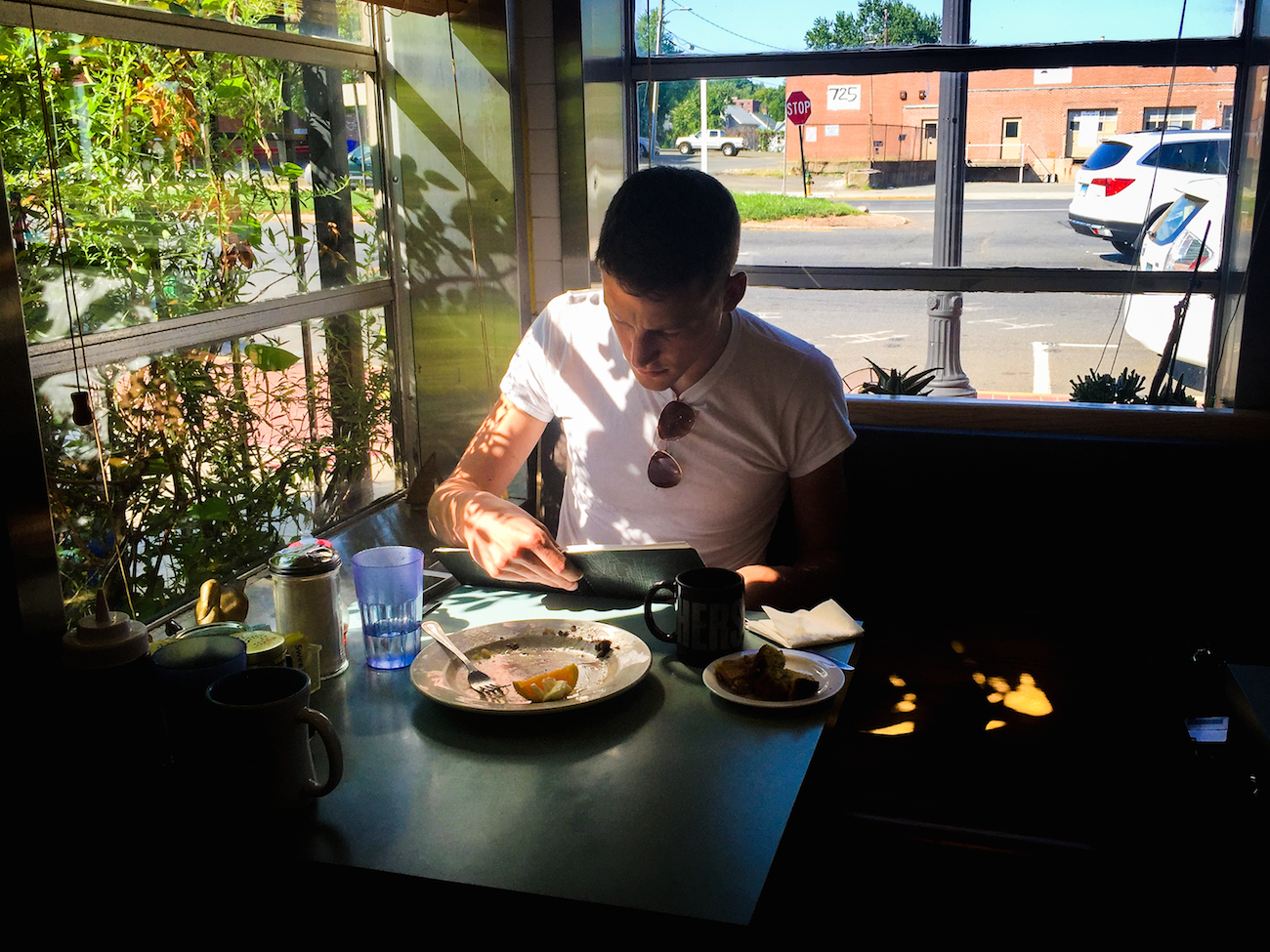 “I usually go with blueberry pancakes,” Brett A. Maddux said, flipping through the O’Rourke’s menu. “I also don’t quite frankly give a shit about the food.”

On a Sunday morning, I joined the poet at the famous Main Street diner to discuss his work and creative process. On Sept. 1, the University of Iowa graduate published “regent,” his first collection of poetry through Silk House Publishing.

Inspired by the sounds of clacking silverware on dishes and half-heard conversations, Maddux manages a nonchalant profoundness both in the collection and in person. Over the course of nearly two years, starting in October 2014, Maddux visited diners throughout the state of Connecticut, creating over four hundred poems, one hundred of which make up the final piece. Silk House Publishing founder Emily Berregaard and editor Julia Rubano helped to arrange the collection and edit the individual poems, respectively. Haley Johannesson, Maddux’s former professor from the University of Iowa, also helped edit the collection.

“[Haley was] the first person to make me write poetry when I was at the University of Iowa,” Maddux later wrote in an email to The Argus. “She changed my life and continues to suffer through all the bad poetry I constantly send her, which is why the book is dedicated to her.”

Maddux began what would soon become the collection after the death of his mother. While a lot of the earlier poems deal with mourning and the aftermath, he began to branch out in content and media forms, creating the popular Instagram handle @dinersofconnecticut.

“Part of the premise of dinersofconnecticut is to make art in public places consistently, to openly be making art,” Maddux said. “If people come by I’m willing to talk to them about it, but I also just want to hear things. So when I overhear a conversation between two old women at a diner in Torrington, what they talk about is specific to that place in my mind. It influences what I write about. I’m not trying to take other people’s lives or stories and steal them. That feels dishonest.”

The Iowan explained some of the many reasons for choosing diners as the space in which he would create.

“It feels like time as we know it now does not properly exist when you are in a diner at 5 o’clock in the morning,” Maddux said, examining a slice of butter on his knife. “It feels like you are in 1945. Something feels different.”

Maddux also discussed the significance of several diners during the project, including O’Rourke’s Diner. Having spent some time in Middletown with an old girlfriend that went to Wesleyan, he has incorporated several poems about the area into the collection.

“In terms of the spiritual pulse of the thing that I’m trying to do, like the places I return to, [O’Rourke’s Diner] feels like home,” Maddux began. “In West Hartford, the Quaker Diner…[is] aesthetically very beautiful to look at, but it also feels close, very near to me, not geographically, but to my heart. I go there and I feel the emotion of four years on top of me. I feel time there in a way that is distinct….Once I invited 10 different people to join me over the course of a week and wrote 10 poems at the Quaker Diner. I did a self-imposed week-long residency.”

Several of those poems from the Quaker Diner Series are also featured in “regent.”

Maddux explained that he had never worked with editors in such an intimate way before, and that conflicts of interest emerged occasionally.

“[Berregaard wanted to include the poems that were] objectively lovely or at least attempting to be,” Maddux explained.  “And those poems are fine. [But] to me, degenerate sex poems are also very true expressions of who I am, in a way that is not affirming….It’s not like anyone will read this book. No one will. But anyone who does, I don’t want them to read it and think, ‘Oh, this guy is [really] introspective.’ No, I write all sorts of debauchery and foolishness. For as many poems as there are about my mother or women I’ve loved, there are just as many about the stray cats in my neighborhood or the terrible things I’ve done to people I care about. Both worlds can exist.”

Despite these moments of self-deprecation during our conversation, Maddux expressed his need to author poetry on a daily basis.

“If I didn’t write this, I would feel worse,” Maddux concluded. “I would feel miserable every day….You just keep ringing that bell until somebody hears it.”

With Maddux’s permission, The Argus has provided the opening poem from “regent” below: