Amid increasing tensions surrounding free speech and inclusivity on college campuses, University President Michael Roth responded to University of Chicago Dean of Students Jay Ellison’s letter to incoming students denouncing trigger warnings and safe spaces in the form of a letter published in The Washington Post. In response to Ellison’s refutation of protective measures that he sees as stifling free inquiry, Roth argues that institutions of higher learning are far more diverse now than they were before, and that free inquiry is possible while making considerations for students’ well-being.

Most of what Roth responded to is in a paragraph of Ellison’s letter to UChicago’s Class of 2020 that many, particularly on the alt-right, have praised for its frankness, while others have criticized it for being hyperbolic, and, as Roth argues, merely seeking attention.

“My argument was that the Dean’s letter was not just directed at the students,” Roth wrote in an email to The Argus.

“Our commitment to academic freedom means that we do not support so-called ‘trigger warnings,’ we do not cancel invited speakers because their topics might prove controversial, and we do not condone the creation of intellectual ‘safe spaces’ where individuals can retreat from ideas and perspectives at odds with their own,” Ellison writes.

Some in the UChicago community immediately spoke out against the letter—which was initially reported on and published by The Chicago Maroon, the University’s independent student newspaper—such as Cameron Okeke, whose opinion was published in Vox with the headline, “I’m a black UChicago Student. Safe Spaces Got Me Through College.”

“To those unfamiliar with the UChicago’s abysmal campus climate, a strong stance against echo chambers may seem reasonable,” he writes. “But marginalized students know that this declaration ignores the real problems on campus: sexual assault, racial profiling, and other troubling issues.”

The student body at UChicago has recently undergone cultural changes instituted by the administration that contextualize Ellison’s letter to some extent outside of the national debate on the changing discourse on college campuses.

The University of Chicago’s simultaneously self-loathing and self-congratulatory mantra, “Where fun goes to die,” has been the symbolic center of changes at the school, which has traditionally been known as an academically rigorous, politically conservative, and socially reserved institution. Rather than citing famous alumni when pitching the school—as do Wesleyan students and alumni with Lin-Manuel Miranda, Joss Whedon, Matthew Weiner, etc.—UChicago students and alumni will often choose to point out that the school has produced more Nobel Prize winners than any other institution of higher learning in the world.

These particulars to UChicago, coupled with nationwide trends among students in higher education—most notably at highly selective schools—have led to increased tension in the school’s community over the relatively new landscape of free expression and discourse at schools that are trying to become more accessible to all. Administrators in particular have been trying to change the perception of UChicago as a place where “Fun goes to die,” such as Vice President and Director of Admissions and Financial Aid Jim Nondorf.

“I don’t hear, ‘Is this where fun goes to die?’ that often, I have to say,” Nondorf said in a Q&A with Same Levine of The Chicago Maroon. “The fun dying has died, which is great. Or it’s being resurrected here [laughs]. What’s nice about us is that we’re not the same as every other school. The kids who want our kind of education, who are rigorous and really love to learn, they’re gonna get that vibe and they will apply, I think followed by we’ll love them, and they’ll accept. And the students who aren’t a great fit, they’ll know it too.”

Nondorf in his comments and very duties in admissions illustrates one of the two central questions at the center of the debate Roth and Ellison are taking part in: Who belongs at highly selective schools?

The other question that Ellison raises is what the mission of the university is, which Roth begins his argument addressing.

“How is it possible that a distinguished university polishes its own apple by stating the obvious, that freedom of thought and expression are essential to its mission?” Roth writes. 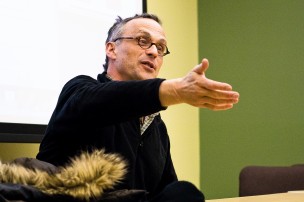 Roth then addresses who belongs at institutions of higher learning now compared to who was even allowed back in the so-called “glory days” of many detractors of trigger warnings and safe spaces.

“Kids today are coddled, we were told, and when they get to college, they fail to respect the rough and tumble contest of ideas that middle-aged alumni remember as being part of their own college experience,” he writes. “No matter that when most of us oldsters were in college, the campuses were far less diverse places than they are today. There were many voices that none of us got to hear.”

“Debates can raise intense emotions, but that doesn’t mean that we should demand ideological conformity because people are made uncomfortable,” Roth wrote last fall.  “As members of a university community, we always have the right to respond with our own opinions, but there is no right not to be offended…. Censorship diminishes true diversity of thinking; vigorous debate enlivens and instructs.”

Specifics of the controversy at the University are not included in Roth’s letter.

A key argument that Roth makes is that Ellison’s letter—which is ostensibly about the values for which UChicago stands—is really just a publicity stunt aimed at donors.

“But perhaps the dean’s letter was aimed at a different audience—those concerned with the bogeyman of political correctness and those who worry that free speech isn’t the absolute value it used to be,” he writes. “That would explain the massive publicity.”

In context, Roth’s letter is published by one of the most respected and widely read newspapers in the world, with nearly 500,000 papers distributed on weekdays and 890,000 monthly page views among 76 million monthly users.

“After I was interviewed in the NYT about the Chicago letter, I wanted to write something to more fully present my views on this subject,” Roth wrote in an email to the Argus when asked about his argument concerning the publicity seeking nature of Ellison’s letter. “I decided to publish my oped in the Washington Post because I have written for this outlet before and because it has a wide readership.”

Ellison’s letter was sent to all incoming first-year students and was initially reported on by The Chicago Maroon’s Pete Grieve.

More broadly, the debate between Roth and Ellison is currently taking place all over the country, across generations, professions, and political ideologies. It remains to be seen who administrators like Ellison think should belong at institutions of higher learning as the missions of these universities resist or enact change.