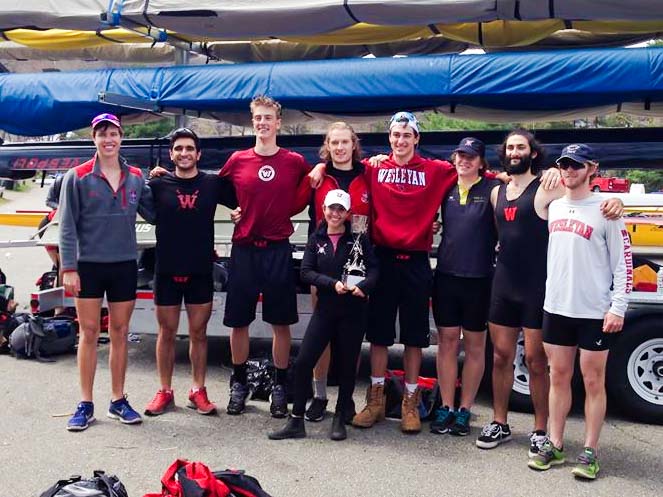 The men’s and women’s teams continued to succeed on the water with good results against Little Three rival Williams and Route 9 rival Trinity. Onota Lake was the setting for the Ephs’ and Cardinals’ duel two weekends ago.

The men’s varsity eight came up just two seconds short of taking down the Purple and Gold. Williams crossed the line in a time of 6:24.9 and Wesleyan finished in 6:26.9. The first boat is now 18-30 in 48 head-to-head matchups against the Ephs with its last win coming in 2007.

The men’s second varsity eight rowed to a victory for the Cardinals, finishing with a time of 6:58.2 to best the Ephs (7:04.1) by just under six seconds.

“The team has done great this year,” said Colin Mattox ’17. “We are a young team [that has] really been able to mature throughout the year. I have been very impressed with our freshmen and their dedication to the team and sport so quickly despite their youth.”

The women posted great performances, but were unable to row faster than Williams in all three races. The first varsity eight for the Redbirds finished in a time of 7:20.9, only one second off of the Ephs’ winning boat. This defeat brings the Cardinals to an all-time record of 6-34 versus the Williams first boat in head-to-head matchups.

“I think the team has really grown throughout the season,” said Hannah Brigham ’17. “We have had some very challenging blocks of work which have really pushed us and improved our fitness. Our technique and ability to row together has been improving…. I can feel the boats gaining speed each week.”

The women’s second varsity eight boat also had a close result, coming in at exactly three seconds behind Williams at 7:56.3 to 7:59.3.

The Ephs had two boats compete in the third varsity eight race, and the Cardinals came in sandwiched between them. Williams’ first boat finished in 7:56.2, faster than the team’s second varsity eight boat. Wes finished just over 12 seconds behind the pace at 8:08.9, and the other Ephs’ boat earned a time of 8:45.8.

The novice four Wesleyan boat crossed the line in 9:29.3. The Ephs had three boats participating in the event, one of which won the race in a time of 8:37.2.

This past weekend, both teams traveled to Worcester, Mass. to battle it out against Trinity. The men also faced stiff competition in the College of Holy Cross, as the Crusaders won all three races.

In the second varsity eight, Holy Cross was once again victorious by just over three seconds, and the Cardinals just squeaked out a second place finish by a little less than two seconds. The Crusaders finished in 5:57.8, the Cardinals in 6:00.05, and the Bantams in 6:02.21.

The third men’s varsity eight featured the same order of results as the first two races, with Holy Cross winning in a time of 6:04.63. Wesleyan came in just over three seconds back at 6:07.99, and Trinity was way off the winning pace after posting a time of 6:25.72.

“There was a lot of energy surrounding the sweep of Trinity, but we can’t live in the past and we’re focused on the last two weeks of racing we have for this season,” Mattox said.

The women rowed hard, and their dedication paid off with three victories over the Bantams. The first varsity eight featured the Cardinals taking down the Bantams by three seconds, 6:32.45 to 6:35.45. With the win, the ladies are now 14-22 all-time versus their Connecticut rival.

“It was incredibly exciting sweeping the Trinity races this weekend, especially since it has not happened in a very long time,” Brigham said. “Trinity is one of our regular competitors, so it always feels good to beat other boats in the ’Cac.”

The second varsity eight for the women was not much of race, with Wesleyan finishing in 6:56.94 and the Bantams posting a time of 7:12.77.

The third varsity eight was similar, as the Redbirds comfortably won in a time of 7:08.47, which was just under 15 seconds faster than Trinity’s time of 7:23.34.

Both the men and women are back on the water next weekend, when they travel back to Worcester to compete at the New England Rowing Championships.

“Our goal for ECACs and New Englands is to get all boats to the Grand Finals, and then to the medal docks,” Brigham said. “We’ve had one of the most grueling winter trainings, so it’s nice to see some of this hard work paying off.”

The following week will be the biggest test of the season, as the ECAC Championships are set for Sunday, May 8.

“Our goal is to lay down our best race,” Mattox said. “We can’t control many things outside of our own performance so we hope that putting forth our best effort yields a result we’re proud of.”