The women’s lacrosse team (3-5, 0-4 NESCAC) has dipped and dodged through opposin
g defenders on its way to a 3-1 out-of-conference record, in which it outscored its opponents 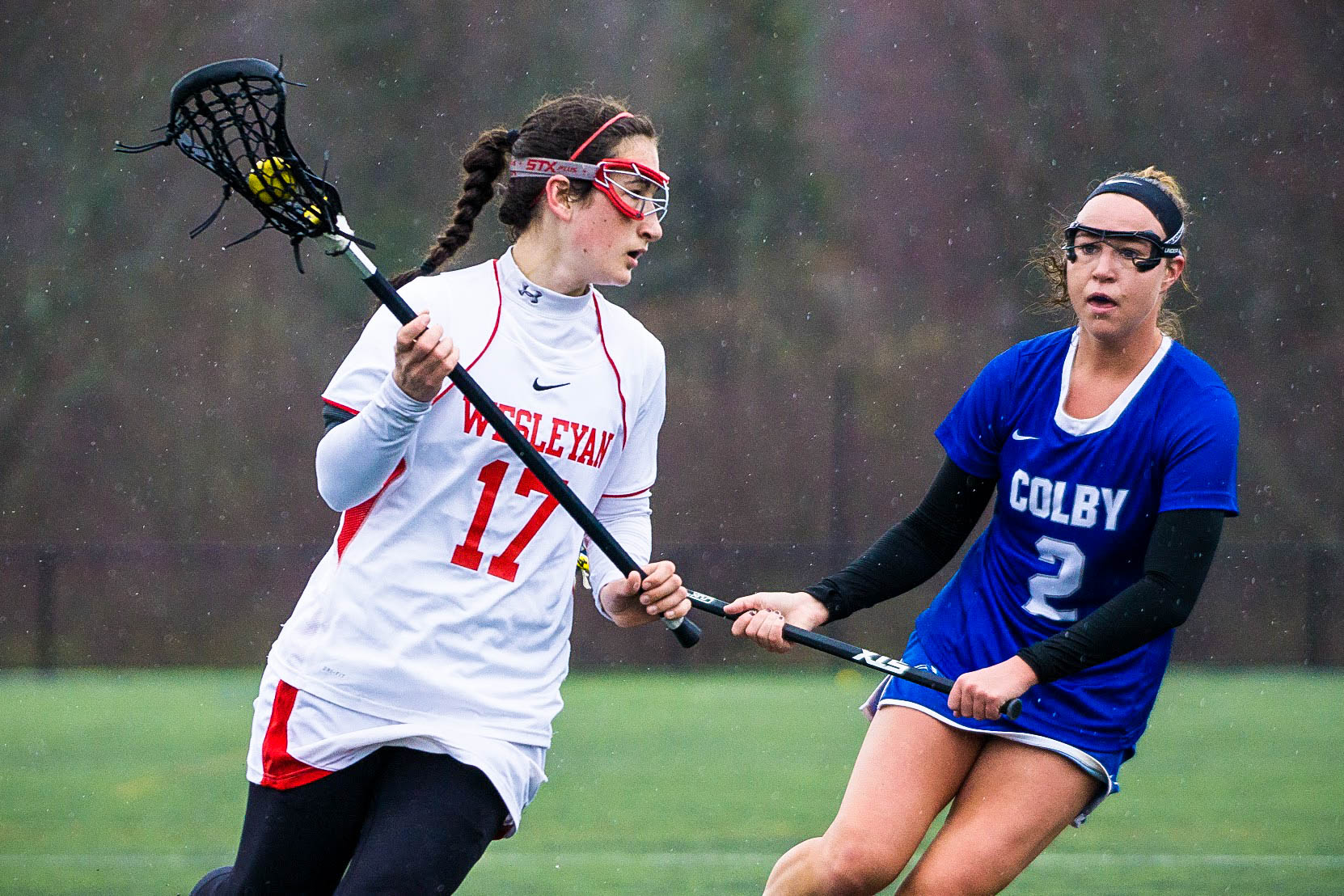 “So far we’ve been improving with every game and practice,” wrote captains and seniors Nina Labovich, Emily Gretsky, Abby Reed, and Martha Harding in an email to The Argus. “It has been awesome to play for Coach [Kim] Williams, and we are excited about the upcoming games. Every day is an opportunity for us and we are looking forward to showing more improvement against Williams.”

Although the goals have been apparent in these games, trouble has risen for the team in creating offense against the ’CAC. This past weekend, the Redbirds suffered their fourth consecutive conference loss in a 7-3 defeat at the hands of Colby.

“I think that we have grown a lot this season, but that there is still a lot to be approved on,” said Meredith Smith ’17. “We have won some tough, close games but we need to come out ready to play every game and it seems like some games we just haven’t been able to do that from the start.”

Smith Field hosted a cold, misty duel on March 26 between the Cards and the Keane Cougars of the New Jersey Athletic Conference. The spikes on their cleats were covered with patches of grass, but this didn’t stop Wes from obliterating a previously unbeaten Keane side. The Cougars came into the game averaging 16 goals per game, but it would be the Cardinals who would generate all of the offense on this particular day, earning a decisive 14-2 win.

After the first 30 minutes of action, Wesleyan had already scored eight times, while pitching a shutout on the other side of the field. Smith’s hat trick in the first half was impressive, not to be outdone by any of the five other Cardinal scorers, who tallied one goal apiece. By the time Wes was up 10-0, Smith had added another goal, Liana Mathias ’17 had put in her second of the game, and Dana Mitchell ’18 and Julia Black ’18 each had a goal and an assist.

Following Keane’s first goal of the game, the Cardinals responded with four of their own, fired off the sticks of Sara Bennett ’18, Harding (twice), and Breanna Cavanaugh ’19. Garbage time provided the Cougars with another score, reaching the end total of a 12-goal advantage for Wesleyan.

Rachel Aronow ’17 pitched in with a goal and an assist, while Becca Phillips ’17 posted a score on four shots taken. Bennett and Caroline Sgaglione ’19 each picked up two ground balls.

Goaltender Labovich was pulled after almost 56 minutes of action, stopping 13 shots on 14 attempts. Grace McCann ’17 got the call from head coach Kim Williams to relieve Labovich for the final 4:10.

The Cardinals doubled the Cougars in ground balls, 8-4, and Wes was also extremely effective in clearing the ball out of their defensive half after a shot or turnover. 13 out of 14 times Wesleyan was successful in this category. The Cards did lack some discipline though, committing 31 fouls for the whole game.

Last week, the Cardinals traveled out of conference to face the Bobcats of Babson from the New England Women’s and Men’s Athletic Conference. This game proved to be a tougher task, but Wesleyan ended up on top by a final tally of 9-8.

“We really came together and worked as a team against Babson,” Smith said. “We knew we would win and we made it happen. Babson is a good team and that game showed us that we can beat any of the teams we play if we work together and believe we can win.”

The Redbirds ended the first half with a two-goal advantage, scoring six times throughout the opening 30 minutes. After Harding tied the score at 1-1, the Bobcats scored two consecutively to take a 3-1 edge. Wesleyan answered with four of its own over a 15-minute span. The production came from Smith, Black, Aronow, and Smith. After nine minutes passed in the second half, Wesleyan held an 8-5 advantage, receiving goals from Antonia Kaz ’19 and Mathias. The Bobcats responded by tying the game up with three straight goals at the 20:22, 14:00, and 8:26 minute mark. Offense ceased to exist over the next seven minutes, but with 92 seconds remaining, Smith closed the deal for Wesleyan on an extra player advantage, giving her side a 9-8 victory.

Labovich played the entirety of the contest, making 11 saves on 19 shots that came her way. Smith added her second straight game with at least three goals, and Mathias tallied three helpers. Aronow picked up three ground balls, while Kaz and Amy Breitfeller ’19 were right behind her with two apiece.

“Games like Babson show us how important it is to play as a team,” the captains wrote. “The win at Babson came from a collective effort, everyone stepping up to make big plays, hustle and work together. We have the best sideline probably in college sports, and that energy is critical to our success. Without everyone’s contributions, we would not have been successful.”

This past weekend, the Cardinals came home to a rainy Smith Field to take on Colby (6-1, 4-1 NESCAC) in their fourth NESCAC battle of the 2016 season. The Redbirds fought hard, only trailing 3-2 when the horn sounded at the conclusion of the first half. Aronow tied up the game at one, and following two scores from the away side, Smith cut the Colby lead back to one.

“I think that we need to just execute more.” Smith said. “Our coaches come up with great plays and they tell us what we need to do to win, but sometimes it seems like we just don’t execute them. I think that we also need to be more confident on the field. We have the potential to win any of these games and we play so well in practice, but when it comes to the games we seem to hesitate a lot more.”

The Mules controlled the second half, scoring four straight goals over the first 25 minutes of the half to take a commanding 7-2 lead. Mathias would get the Cardinals one goal closer at 4:28, but it was too little, too late for the Red and Black.

The Cards have not beaten the Mules since 2007 and are 3-18 all-time against the side from Waterville, ME.

The Wesleyan netminder faced twelve shots, stopping five of them, and Bennett picked up a team-high two groundballs. The Cardinals only put together 15 shots, while the Mules rattled off 24.

Two days ago, the Cardinals traveled to Amherst (6-2, 3-2 NESCAC) to take on the ninth ranked team in the nation under the lights of Pratt Field. Wes struggled in the first half and came out of the locker room facing a 5-1 deficit. Down 4-0, Mitchell found the back of the net, but Amherst would regain a four-goal advantage with just seven seconds left in the half.

“It goes to show that we can play with and win [against] any of these teams, but sometimes I feel like we just aren’t confident enough and that’s what gets in the way of our success,” Smith said. “Towards the end, we became more confident and scored a few goals, but we need to do that from the start of each game.”

Two quick goals from the Purple and White left the Cardinals trailing by six, but the Cardinals fought hard, outscoring their opponents 4-3 for the duration of the contest. Black (twice), Phillips, and Smith each scored and Cavanaugh added an assist; the team’s only such dish of the evening. Labovich made six saves on 16 attempts as Amherst defeated Wesleyan, 10-5.

“We were really happy with our wherewithal and our hustle in our second half against Amherst,” the captains wrote. “We were forcing turnovers, playing more aggressively on offense, and coming up with important draw controls. The second half was a great indicator of not only our potential as a team, but our improvement since the start of the season.”

The team has their hands full this weekend with a Little Three matchup versus Williams. The Cards are 8-33 in the team’s existence against the Ephs with the last victory coming at home in 2012.

“We will beat Williams,” Smith said. “I have no doubt about that.”