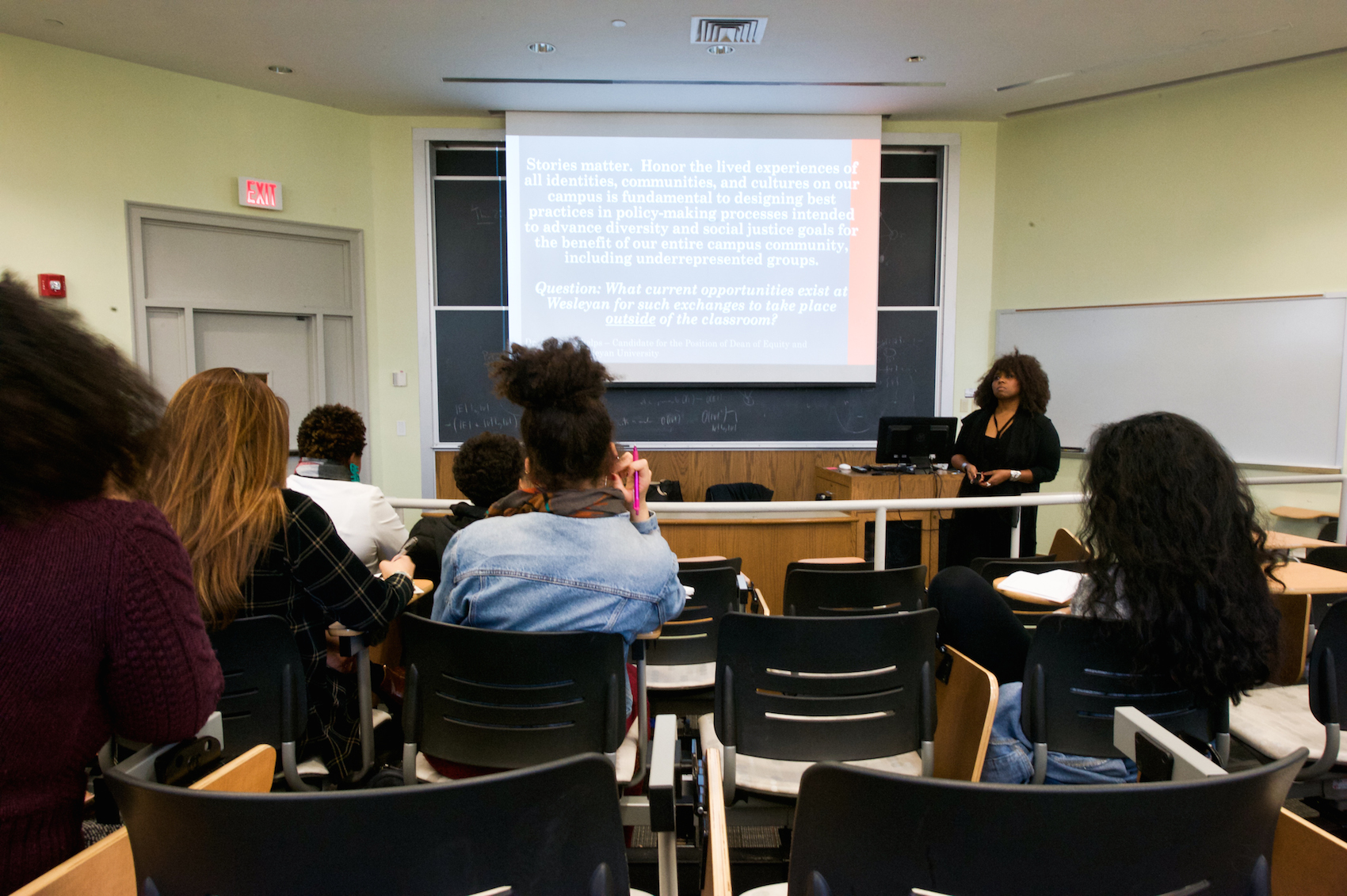 Over Tuesday, Wednesday, and Thursday of last week, the University hosted three candidates for the position of Dean for Equity and Inclusion. The three candidates each visited campus for one full day, engaging in conversations with all members of the community, which culminated in a 45-minute presentation at an open forum.

“The Office of Equity & Inclusion provides leadership and accountability to resolve systemic inequities for all members of the Wesleyan community through a metrics-based approach to research, education, and service, by promoting a healthy, thriving campus climate and a community of excellence,” the Office of Equity and Inclusion’s mission statement reads.

The search was prompted when the previous dean, Renee Johnson-Thornton, moved to her current position of Dean for the Class of 2018 earlier this school year. The search was convened by a committee consisting of Farias; Equity Compliance Director Debbie Colucci; Fisk Professor of Natural Science, Professor of Molecular Biology and Biochemistry, and Professor of Integrative Sciences Ishita Mukerji; Assistant Director of Human Resources Anjali Tamhanker; and Shardonay Pagett ’18.

As supervisor to the Dean for Equity and Inclusion position, Farias convened the search committee and created the job description.

“It’s clear that there is an ongoing need for someone at this level to interact with students, faculty and staff, as well as interface with multiple groups and programs on campus,” Mukerji wrote in an email to The Argus.

Mukerji, who was asked to be on the search committee, is actively involved in the Wesleyan Math and Science Scholars (WesMaSS) program. The program supports students from underrepresented groups studying math and sciences.

“I am hoping the new dean, [who will hold the position of associate director of WesMaSS], will be able to establish these same kinds of relationships with the scholars,” Mukerji wrote. “I and the current director of the WesMaSS program, [Associate Professor of Chemistry] David Westmoreland, expect to be working with the new dean quite closely in the context of this program.

The committee looked for talented, experienced personnel and chose the three candidates out of over 100 who applied.

“It was a competitive pool and the top candidates had many of the qualifications that we were looking for in the new dean including background and experience in the area of the position,” Mukerji said.

Farias echoed this sentiment in saying that the candidates were all ideal, but this was a hard decision because there were many other applicants who were qualified.

“The committee came down to these three, not because there were many others who weren’t qualified, but these were the three that we felt were the strongest candidates, and felt had the capacity to fulfill the job,” Farias said.

The three candidates each had to come to the University for an entire day to simulate the experience that they would have if they were to work as the dean.

Farias said that these candidates are put through a long day meeting with different constituencies at the University so that they can understand what kind of position they are about to take on. He said that the full-day visit is a very taxing process for the candidates.

“It’s done on purpose, it’s done because, it’s part of the way it happens at Wesleyan, but it’s also part of [what’s needed for] the job,” Farias said. “There are days, multiple days, where this is the norm, you are coming in at eight o’clock in the morning, [and] you’re not leaving… until nine o’clock in the evening, then you get up the next morning and do it again.”

Farias wanted to see whether or not the candidates could handle this long day schedule.

“Partly it’s also to see stamina,” Farias said. “Can you deal with this high tempo environment, and also the multivariance of the populations you engage with?”

“It’s all to see performance…to see how they perform under the Wesleyan environment,” Farias said. “It’s close to a simulation of a workday, and the tough questions and engagement that they’re going to have if they take the position.”

The candidates were all given the same prompt that they had to respond to in their presentations.

The presentations, which were open to all from the University, attracted people from different parts of the community.

“It’s an easy way for a lot of different people to have an opportunity to interact with the candidates and get a sense of how the candidate might respond to their concerns,” Mukerji wrote. “The new dean will interface with a number of different constituencies on campus, so it’s important to get feedback from all these different groups about the candidate. The open forum is one mechanism to get this critical feedback.”

The ideal candidate, according to Farias, is someone who can handle all the busy workdays and who can also move up and down the ladder, in the sense that they will be able to interact with all members of the community.

“They have to be very comfortable, very socially engaged, very empathic,” Farias said. “That’s critical for this position, the ability to hear people to listen, and to be a very well-rounded educator.”

The candidates also have the opportunity to test the waters of the University environment when visiting campus, in seeing whether or not they could fit in.

Hopefully, the position will be filled by the end of the academic year.

“[Ideally, the new dean] has to be here no later than the end of the semester so we can start the process of bringing that person into the fold of the office and also getting them to understand the lay of Wesleyan,” Farias said. “The ideal would be [for the dean to] start as soon as possible when students are still here, so there can be a marination process that takes place before the semester ends.”

Farias said that the position and the interview process on campus was a very tall order, but there are those who meet the standards necessary.

“It’s a wild, almost rollercoaster ride of a work experience that this office and the people that work in it have,” Farias said. “This was meant to mimic that.”