“The British Bake Off” Provides More Comfort and Less Spite 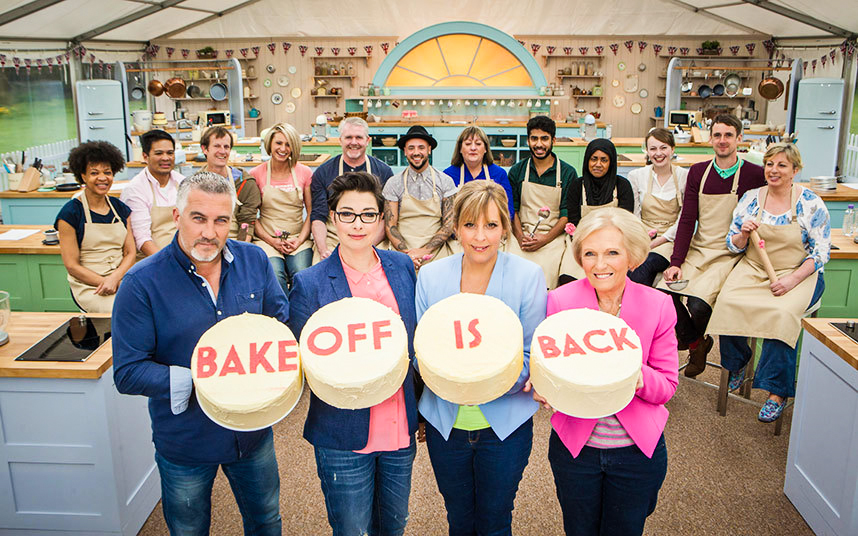 I returned to school early from winter break to work on my thesis and found myself alone for two weeks in my four-person house. Campus was mostly empty, and none of my close friends were around. I decided the best way to stave off loneliness was to whip up a batch of lemon cookies.

It wouldn’t have normally occurred to me to bake, but I had recently started watching “The Great British Baking Show” (née “Bake Off”) on Netflix, and the show made it seem like just the right project to take on. With my laptop set up on the kitchen table beside my measuring cups and sack of flour, I watched episode two of season five—devoted to biscuits, appropriately—as I worked.

The show gathers 12 amateur bakers from around the U.K. to compete. In each episode, one contestant is eliminated until only three bakers remain for the finale. While Diana rolled pinwheel dough and Nancy prepared what would eventually become the walls of a gingerbread house, I creamed sugar and butter in a metal bowl. I added the dry ingredients to the wet ones, rolled out balls of dough, and placed them one by one on the baking sheet. It almost felt like a communal activity.

The batch was still warm when my brother called to inform me that one of my childhood friends had died a few hours earlier in a bus accident on a community service trip. It was too late to catch a train home to New York, and most buildings on campus were closed. There was nowhere to go. So I sat.

At some point, I pressed the “resume” button on “Bake Off.” I watched three more episodes in succession: bread, desserts, and pies and tarts. The dizzying array numbed me just the right amount, the way that binging on food does in the moments just before nausea hits.

One comfort of “Bake Off” is its visual appeal. The competition takes place inside an enormous white tent pitched in the middle of a bucolic garden, some cross between Eden and a Victorian tea party. Inside the tent, each contestant gets a person workstation, complete with pristine appliances in Easter egg colors.

The other comfort of the show is its ritualistic adherence to structure. There are three baking challenges per episode: the signature, the technical, and the showstopper. For the signature challenge, the bakers prepare dishes they have made many times before, like family recipes and dinner party staples. It’s a way of easing them into the more demanding work that lies ahead. “Bake Off” takes no sadistic pleasure in watching its contestants fail; it’s a show that roots for its contestants.

The next segment, the technical challenge, is the most satisfying part to watch. The bakers, with no prior preparation, are all given the same recipe with minimal instruction. The bakers must use their prowess to prepare the dish as it was intended, and the final products are placed side-by-side. The judges, regal 80-year-old Mary Berry and the slightly slicker Paul Hollywood, taste each dish and provide extended, if nitpicky, commentary (“The layers are a bit uneven” is practically Mary’s catchphrase). They then rank them from worst to best.

Each “Bake Off” episode then concludes with a showstopper challenge, in which bakers must present a large dessert that is both visually appealing and delicious. The results are elaborate and often ridiculous. Showstoppers in season five include a fire-breathing dragon made out of cookies, a chessboard made out of layer cakes, and a stack of pies laughably dubbed the “Pieful Tower.”

Even more uplifting than the optics of the show, and the aspect that most sets it apart from other reality TV competitions, is its inclination toward compassion. The eliminations on “Bake Off” don’t feel like eliminations; they have none of the callousness of Tyra Banks ruthlessly telling a girl she must “pack…her bags…and go home.”

In fact, the hosts, Mel and Sue, dread the task so much that they alternate who announces the terminated contestants each week. Before the elimination, the host apologizes profusely (“It’s really hard ’cause I have to send someone home today”). Afterward, she showers the baker with so much praise (“You are brilliant, my darling, and you are going to rule the world”) that the decision doesn’t even feel final. Hugs abound. Tears are shed. It is not unusual, at the end of an episode of “The Great British Bake Off,” to hear the words “I love you.”

After attending the funeral the next day, I sat at home, still in my dress, unsure of what to do. After sending a blubbery, mawkish email to an address the synagogue had provided for notes of condolence intended for the family, I opened Netflix and clicked on “Bake Off.”

Over the course of the next two days, I watched episode after episode. I began to appreciate even the small things, from the neat row of pushed-together chairs that the bakers sat in for the elimination to the way they hung up their raincoats upon entering the tent, like a class of kindergarteners at the beginning of a school day.

Most of all, I liked the contestants. Ranging in age from age 17 to 70, they seemed more like the residents of a small town than a cast of characters. There was Norman, the retired naval officer with an understated baking style. There was Richard, the builder with a blue pencil perennially tucked behind his ear. And there was Iain, the engineer from London who, during the Baked Alaska showstopper challenge, got so frustrated with his melted ice cream that he trashed his entire dessert.

There is no pretension or shtick in “Bake Off”; the people are real and they are flawed. They also care for each other deeply, something practically unheard of on competition-themed reality shows. On “Bake Off,” when a contestant is running low on time, the other bakers and even the hosts help to make sure the dessert is completed.

You know how if you watch a show too much, its rhythm gets stuck in your head? Overdo it on “30 Rock” or “The Simpsons,” and your thoughts will become frenetic and crazy-sounding. The rhythm of “Bake Off” takes over your brain, too, but it is gentle, structured, and calm. Binge-watching “Bake Off” makes the inside of your brain feel like a Raffi song or a needlepoint pillow. Or, most relevantly, a warm, well-organized kitchen.

I saved the final episode of “Bake Off” for the right moment, which came when I returned to school, my house still empty and untouched. Everything was exactly as I had left it, from the plate of lemon cookies in the kitchen to my empty wine glass on the living room table.

There is something otherworldly about the season finale. It is the first time anyone is shown stepping foot in the garden surrounding the tent. It’s greener and lusher and bigger than you think it is, decorated with streamers for a special festival for the bakers’ friends and family. A band plays, children dance, and women wear floral wreaths like subjects of Baroque portraiture. The finalists’ showstoppers, towering centerpieces made out of elaborate pastries, are displayed.

The best part is that all the former contestants return. I’ve missed them more than I realized. Kate, who was once described as having “the arms of Ryan Gosling and the face of a woodland nymph,” sips champagne on a picnic blanket next to her young daughter. Martha, still in high school, reports that her exams went well. I’m even happy to see my least favorite baker, toothy and irritating Jordan. And it’s miraculous to encounter Diana, the eldest contestant, who left the show mid-season due to illness. She smiles at the camera, appearing to be in good health.

When the winner is finally announced, the audience applauds, and the other two contestants immediately embrace her. All three are presented with enormous bouquets. The applause resumes, louder and more emotional this time. It occurs to me that I don’t care who won. I only care that the show is over. Maudlin as it sounds, I’m not ready to say goodbye yet. I want to stay in this place where losers hug winners, where everyone gets flowers, where sick people recover. I want to stay where cakes look like villages and mountains and windmills, and where all my old friends come back again.