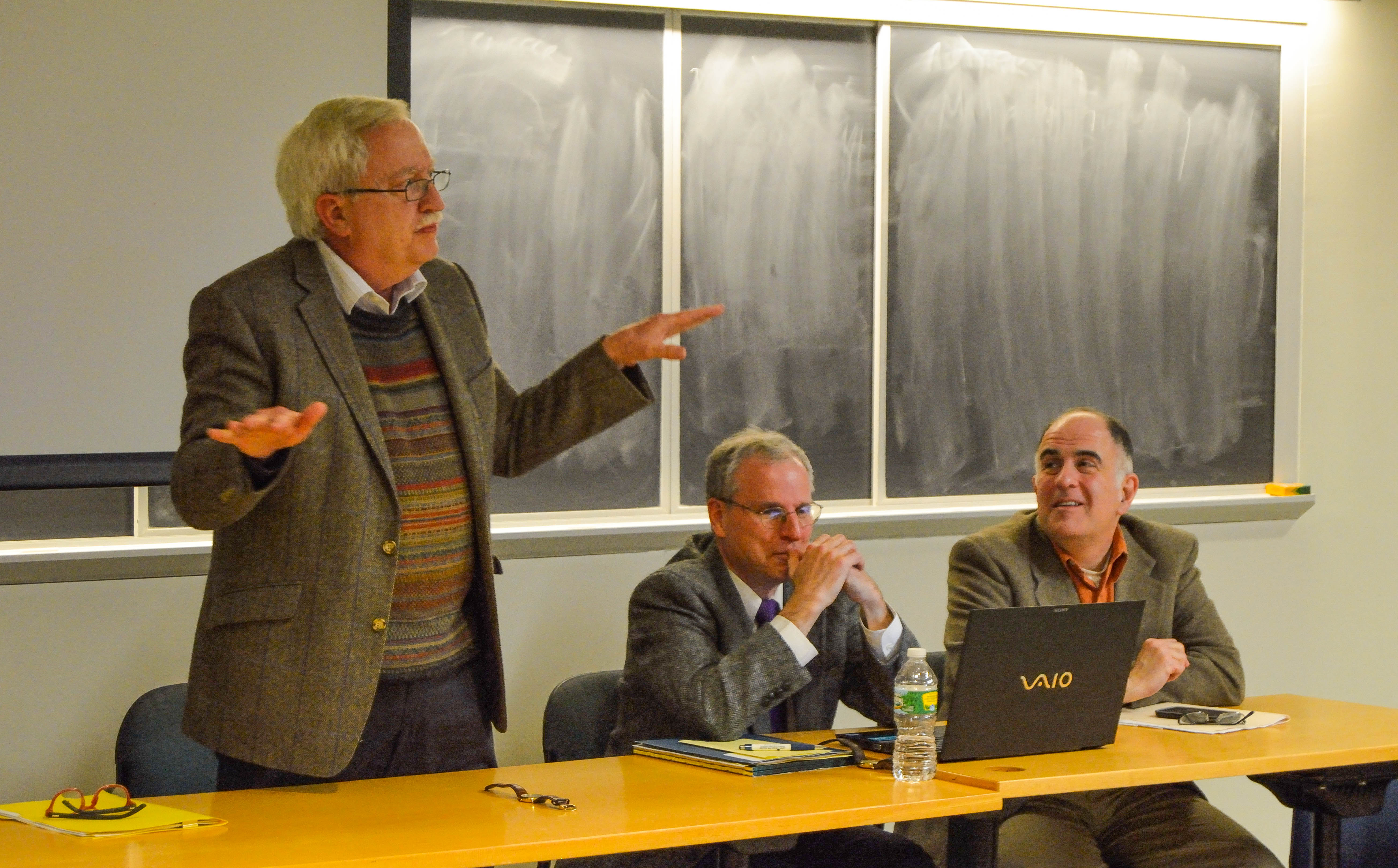 The Allbritton Center for the Study of Public Life hosted a panel discussion focusing on the ongoing Syrian refugee crisis on Wednesday, Feb. 3 in PAC 001. Organized by the Director of the Allbritton Center and John E. Andrus Professor of Sociology Rob Rosenthal and moderated by Professor of Economics Richard Grossman, the event consisted of three panelists who provided information and input regarding the Middle Eastern situation as well as its global implications. The panel is the first segment in a three-part series surrounding the Syrian refugee crisis.

Panel members included John E. Andrus Professor of History Bruce Masters, Professor of Politics at Fairfield University Marcie Patton, and former U.S. Ambassador to Syria Robert Ford. While he served as ambassador, Ford was known for his support of the Syrian opposition against President Bashar al-Assad, even though his personal safety was compromised as a result.

The panelists aimed to shed light on the worsening Syrian plight at the hands of their very own government under Assad, who is accused of using chemical weapons against his citizens and preventing Red Cross vehicles from aiding impoverished cities.

As a result of these oppressions, the overwhelming population of youths in the country have staged an ongoing civil war in an effort to overthrow the establishment. The panelists also mentioned the influential role the Islamic State plays in Syrian politics, and how it serves to further divide an already war-torn nation. The dangers that this national instability provokes are instrumental in the refugee crisis as civilians attempt to flee the violence.

After being introduced by Grossman, Masters began the dialogue by giving a brief history of the Syrian region, showing how the current crisis evolved into what it is today.

“This episode of the Arab Spring is the most vicious,” Masters said. “It is because there are elements of the Syrian population which feel that this is an existential war…that if they lose the war, they will be dead. That gives a viciousness to it that is not present in the other countries of the Arab Spring.”

The Arab Spring in Syria arose after Assad’s promise of freedom and prosperity failed to be realized as poverty in rural areas steadily increased.

“All around Damascus were these huge high-rise slums that had grown up as rural people were coming in, and that was the source of the revolution,” Masters said. “Those are the people that basically felt that their contract with the regime was busted.”

Patton followed up Masters’ preface with a brief lecture on the Turkish Open Door Policy and how it caused the country to be a haven for the world’s largest population of Syrian refugees.

“Europe has decided that it’s a greater priority for them to stop the refugee flow rather than to take on the growing menu of humans rights abuses that compromise the freedoms of Turkey,” Patton said. “They’ve also designated Turkey as a safe country of origin, and this is a legal term which basically means that the European Union may deport any refugees that make it into Europe back to Turkey, if they come from Turkey.”

Amidst growing concerns about border security in the Schengen Area, Patton speculates that Turkey may follow suit.

“As Europe begins to take a more and more fortress mentality, I’m wondering whether or not Turkey is going to revise and replace its open door policy,” she said.

Ford took over the final part of the lecture segment, focusing mainly on the futile political situation in Syria. Having witnessed the turmoil in the country during his time as an ambassador and having been removed from the post by the U.S. government after receiving death threats from the Syrian government, Ford does not believe that the Syrian condition will improve any time in the near future.

Known for his human rights activism, Ford discussed at length the numerous ways in which the Syrian government has failed its people, most notably in the presence of four separate secret police forces in the region.

“Syrian secret police are not bound by anything like the rule of law, so if they suspect you of something, they’ll take you,” Ford said. “There’s no habeas corpus, there’s no right to a free and fair trial…but it’s especially bad in the civil war. There’s kind of a no prisoners mentality.”

During the question and answer segment following the separate lectures, queries were brought up regarding current events in Syria and how border fluidity allows both innocent refugees and dangerous terrorists to escape into the European Union. Masters fielded a question about the perception of Syrians in Europe in the wake of the Nov. 13 Paris attacks, in addition to the string of sexual assaults on New Year’s Eve in Cologne, Germany and how they may be advantageous to the Islamic State.

“In the Paris attacks, one of the guys had a Syrian passport—it turned out later it was a fake Syrian passport—because what better prize is it to have the French people think that Syrian refugees are terrorists?” Masters said. “Then, Europe will close its doors to the refugees, and ISIS can say ‘See, the Europeans aren’t your friends, and the only thing we can do is create the Islamic State here and take them on as our people.’ So yeah, it plays into their hands.”

With respect to national security at home, Ford explained his rationale for wanting to welcome over 100,000 Syrian refugees into the United States, which goes strongly against the border security measures supported by the Republican candidates in the current presidential race.

“Refugee flows into the United States won’t be like in Europe,” Ford said. “There’s this Atlantic Ocean thing, and so it’s really hard to get a dinghy across it. So when they come here, they’re pre-screened, they’re checked, they come on airplanes, we know that they’re on this airplane and there are five of them, and they’re gonna land here and be met at the airport by this agency and taken to this address. It’s totally different.”

Ford emphasized the necessity of maintaining the longstanding American value of giving immigrants an opportunity to start a new life.

Emma Sherman ’17, an attendee of the event, spoke of her reaction to the content presented by the panelists.

“It was helpful to hear the perspective of Ambassador Ford because I feel like so much of what I read and hear about this crisis is from third-party sources rather than those directly involved in the government,” Sherman wrote in an email to The Argus. “And while the perspective of the former is also so important, I enjoyed hearing another point of view of the U.S. government.”

Having spent time abroad in the Middle East last semester, Sherman felt familiar with the issues presented at the panel. However, she still had some questions she felt were unanswered.

“I was abroad last semester during which I spent some time in Jordan where we talked a lot about the refugee crisis and the conflicts in various Middle Eastern countries, so in that sense the information was somewhat familiar,” Sherman wrote. “I’m still pretty confused as to what the role of the U.S. and the wider international community is in times like these, but that’s more of a personal issue than one that can be answered by a panel.”

The next panel in the series, “The Refugee Experience,” will take place at 7 p.m. on Wednesday, Feb. 17 in PAC 001, where attendees will hear firsthand accounts of Syrian refugees who have fled the danger.