In 2013, University President Michael Roth received $735,393 in compensation, according to The Chronicle of Higher Education.

University President Michael Roth has seen his salary as the school’s chief executive rapidly increase in just the past few years.

Roth’s total compensation in 2013 was $735,393, according to a database of private and public college executive compensation packages compiled The Chronicle of Higher Education (2013 is the most recent year for which this data is available). That year, he received $506,995 in base pay, $100,000 in bonuses, $120,148 in nontaxable compensation (which includes things like health care and other benefits), and $8,250 in “other” compensation. 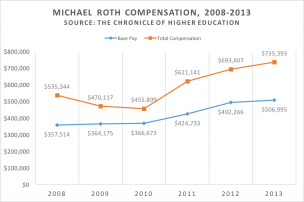 Roth became the 16th president of Wesleyan University on July 1, 2007.