Eric Lonergan plead guilty to charges in connection to the Molly/MDMA-related poisonings last February, after Zachary Kramer did the same last month. 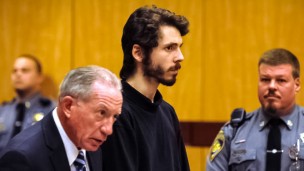 A second former student has plead guilty to federal drug charges, after a series of hospitalizations last February lead to the arrest and expulsion of five Wesleyan students.

According to the Hartford Courant, Eric Lonergan entered a plea deal in New Haven’s U.S. District Court on Monday, Nov. 30. The charge was conspiracy to possess with intent to distribute the synthetic party drug Molly/MDMA. Under the deal, prosecutors will recommend 30 to 37 months in prison and a $1 million fine.

“I conspired with Zachary Kramer and other students to distribute MDMA at Wesleyan University,” Lonergan said in court, according to The Courant.

According to the New Haven Register, Lonergan is accused of selling MDMA from his dorm room for around $200 per gram, beginning in November 2013. He allegedly provided drugs to students at a party in September 2014, leading to a string of hospitalizations. Kramer allegedly replaced Lonergan as the primary supplier of MDMA on campus in December 2014.

“Wesleyan students who bought these drugs from this dorm-room chemist literally risked their lives by relying on his purported expertise,” said U.S. Attorney Deirdre Daly, according to WFSB.

Lonergan was arrested in March along with Kramer, who also faced federal charges, and three other students, who are facing state charges.

On Thursday, Nov. 12, Kramer pleaded guilty to conspiracy to possess and distribute MDMA and synthetic marijuana. His plea deal recommends a sentence of 12 to 18 months.