A total of 10 University students and two visitors were hospitalized on Sunday, Feb. 22. Currently, 11 students were released from Middletown's Middlesex Hospital and Hartford Hospital, and one student remains hospitalized. 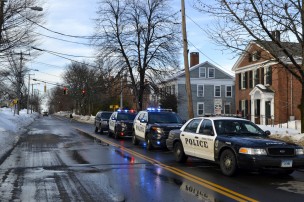 The Argus has published an additional article with updates to this story. Below is the version originally published on Tuesday, Feb. 24.

A total of 10 University students and 2 visitors were hospitalized on Sunday, Feb. 22, for drug overdoses believed to be caused by Molly/MDMA, according to a series of all-campus emails from President Michael Roth and Vice President for Student Affairs Michael Whaley. As of Monday afternoon, four students were released from Middlesex Hospital, four remain at Middlesex for treatment, and four more were transported to Hartford Hospital for further care.

“A Wesleyan sophomore was transported to Middlesex Hospital early this morning and is in critical condition as a result of an apparent overdose,” the first email read. “Two other students were transported in less serious condition but with similar symptoms.”

Just before noon on Monday, Roth sent a follow-up email clarifying the number of students hospitalized and confirming that the complications arose from the use of a version of ecstasy.

“The effects are extremely dangerous, and as of now, four students are in Middlesex Hospital in Middletown (we expect them to be released today) and four others are being cared for at Hartford Hospital,” Roth’s email read. “I ask all students: Please, please stay away from illegal substances the use of which can put you in extreme danger. One mistake can change your life forever.”

Cross Street Fire Station Battalion Chief David Anderson confirmed on Sunday evening that students were taken from the Butterfield dorms, the Foss Hill dorms, and 200 High Street. In a further email on Sunday, Whaley told The Argus that the number of hospitalized students had increased to 11, with a few students checking into the hospital on their own.

A second email in the early afternoon on Sunday informed students of three more hospitalizations and urged all students to ensure that their friends did not require medical attention. Ambulances were present at the Butterfields, West College, and other dorms throughout the day. By 5 p.m., Anderson said the reports coming in to the fire department had slowed significantly.

“We haven’t had any activity for those types of calls in a couple of hours,” Anderson said.

The students are being treated at various hospitals, and Whaley encourages students to stay calm and wait for further updates from the University.

“Several [students] are in serious condition but I can confirm that none have passed,” Whaley wrote in an email to The Argus.

On the evening of Monday, Feb. 23, Associate Manager of Media Relations and Public Relations Lauren Rubenstein released an update.

“At this time, one student remains hospitalized at Middlesex Hospital,” Rubenstein’s email read. “Of the four students at Hartford Hospital, one is being discharged tonight, while three are still being treated.”

“We will be looking in to the origin of the drugs taken and determine the extent of the criminal involvement in the case,” the press release reads. “We would like to take this opportunity to remind everyone to talk to their family and friends about the dangers of taking illegal narcotics. The drug MDMA has been found in and around the community in the past few years.”

Furthermore, according to the press release, any media questions should be directed to Lieutenant Heather Desmond at Heather.Desmond@MiddletownCT.gov.

In Sept. 2014, a number of University students were hospitalized over the course of several weeks after taking MDMA, according to an all-campus email sent by Health Services on Tuesday, Sept. 16 that year.

MDMA stands for methylenedioxy-methamphetamine. According to University Medical Director of the Health Services Department Thomas McLarney in an article published by The Argus on Sept. 18, 2014, the drug is a stimulant and psychedelic substance that increases the amount of dopamine, norepinephrine, and serotonin in the brain. Effects can include anxiety, dizziness, and elevated heart rate and blood pressure. It takes a period of days to weeks for the brain to recover as the released neurotransmitters must be replaced.