“Carol” Lives Up to Its Overwhelming Hype

Todd Haynes' new film explores the struggles of a lesbian relationship in 1952. 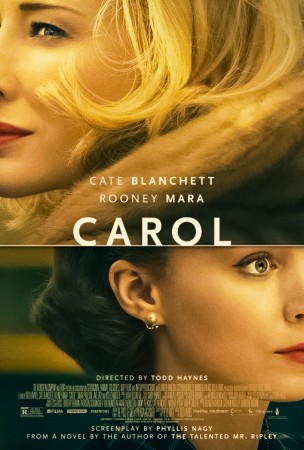 About a month ago, I stumbled across an Autostraddle movie review titled, “‘Carol’ Is Even Better Than You’ve Heard, Is Maybe The Best Lesbian Movie Ever Made.” “I was drunk on it,” Heather Hogan wrote about the Todd Haynes-directed film. “I was so intoxicated by ‘Carol’ I wanted to sit down in the middle of the sidewalk on the New York City street and close my eyes and relive every detail, until I could play it backwards and forwards on a loop in my own imagination for forever [sic].”

The story, though far from controversial now, was radical when it was published in the 1952 novel “The Price of Salt” by Patricia Highsmith (under a pseudonym), who also wrote the source material for Alfred Hitchcock’s “Strangers on a Train.” In it, a young photographer named Therese (Rooney Mara), working a temporary department store job during the Christmas season, encounters an older, glamorous housewife named Carol (Cate Blanchett) shopping for a gift for her daughter. Therese is instantly enamored, and though Carol keeps a femme fatale-like aura of mystique around herself, it’s clear that she’s equally enraptured by Therese. The chance encounter turns into several more deliberate ones, and it isn’t long before the two of them embark on a romantic road trip across the country.

Given that it’s 1952, their relationship doesn’t come without obstacles. Therese is engaged to Richard (Jake Lacy), a boring nice guy who calls her “Terry” and who is utterly bewildered that she doesn’t want to go to Europe with him. Posing a much more serious threat is Carol’s husband Harge (Kyle Chandler), from whom Carol is in the process of getting a divorce. Harge is aware of Carol’s past affairs with women, including her long-time friend Abby (Sarah Paulson), and he threatens to use Carol’s “immoral conduct” against her, barring Carol from seeing her daughter once the divorce is finalized.

60 years after “The Price of Salt”’s publication, the challenge of creating a film based on the lesbian pulp novel had less to do with morals and more to do with practicality. In the book, the story is told entirely from Therese’s point of view. The details of both Carol’s divorce and her relationship to Abby remain a mystery, revealed slowly through conversations in between chunks of Therese’s inner monologue—a fine format for a book read over the course of a week, but not a two-hour movie. Additionally, in the book, Carol is primarily the object of Therese’s desire, and she is barely fleshed out in the way characters usually are. Carol’s utter adoration for Therese is interpreted as snappy and unkind, because that’s how Therese sees it. Portraying Carol like this on film ran the risk of making her unsympathetic and borderline abusive, à la Edward Cullen from “Twilight.”

Instead, screenwriter Phyllis Nagy tells the story from the perspective of both women, and as a result, we as an audience become intimate with both of their desires and fears. We see Carol’s conversations with Harge and her divorce attorney, and watch as her outward shield of glamour begins to fall apart once she learns that she may lose her daughter. We see her and Therese on opposite ends of a telephone line, carefully choosing their words and the pauses they take between them. Through Haynes’s stellar direction, their small physical gestures—the hesitation before a hand touches a shoulder, the minuscule space between a mouth and a neck—become powerful declarations of attraction, just as powerful as when they finally consummate their love.

One glimpse at the trailer for “Carol”—or any familiarity with Haynes’s other period pieces, “Far From Heaven” and “Mildred Pierce”—will tell you that, style-wise, this is a heavily romanticized version of 1952. The first half of the film takes place during the holidays, and the age of decked-out Christmas department stores playing Bing Crosby on repeat is in full swing. Carter Burwell’s lush score swells alongside tunes by Billie Holiday and Jo Stafford, and occasionally the two musical genres weave together. The costume design (by the remarkable Sandy Powell) and the sets are intricate and heavily coordinated, to the point where “Carol” feels like a movie made in the 1950s rather than about the 1950s; Haynes has paid tribute to Douglas Sirk before, and the way his use of color explores the pathos of his characters takes a lot of inspiration from the post-war melodrama director. But unlike “Far From Heaven,” which was a direct homage to Sirk, “Carol” captures the era through a more direct source: photojournalism. Female documentary photographers such as Ruth Orkin, Helen Levitt, Esther Bubley, and Vivian Maier all influenced Haynes and his cinematographer, Ed Lachman. Perhaps most influential, though, was the photography of Saul Leiter and his tendency to shoot blurry but colorful figures through windows and reflections.

Therese, an aspiring photographer herself, composes many of her photos of Carol in the voyeuristic styles of these artists. It seems the two characters are constantly looking at each other through, and are separated by, a Leiterian lens: through mirrors, through the windows of cabs, through reflections of light against a storefront or a car windshield. This is a film about transgressive love, yes, but perhaps more importantly, it’s a film about how that love is reflected back onto a world that will do anything to suppress it. Carol and Therese’s fears do not stem from internal shame; even early on, Therese is willing to dive headfirst into this new relationship. Rather, they fear persecution from the external world and the effect their relationship will have on their loved ones and each other.

It’s easy, therefore, to see “Carol” as a depiction of a more oppressive time, one we’ve moved far past. But sadly, for Hollywood, this isn’t the case. It took Phyllis Nagy 15 years to convince a studio that a story of two white, feminine-presenting, relatively affluent women falling in love was worth making into a movie. Indeed, Todd Haynes, a gay man, has said that the most challenging part of directing “Carol” was not the lesbianism, but the fact that there was no male lead. In the past five years, films like “The Kids are Alright” and “Blue is the Warmest Color” have proven that movies centered on queer women can be financial and critical successes, but only if there are gratuitously long sex scenes or if it’s possible for one of the lesbians to “turn straight” (because bisexuality never seems to exist in these stories).

“Carol”’s biggest triumph of all may be that it avoids these tropes. It manages to tug at the heartstrings of its audience without the cheap clichés that have become the norm in queer films. As I walked out of the theater, dazed and woozy, I realized that, for better or for worse, “Carol” is groundbreaking for film in 2015 for the same reason that “The Price of Salt” was groundbreaking for literature in 1952: it’s a gay drama that dares to have a happy ending.