Two scoreless overtimes meant back to back draws for the Cards, who ran into in-form goaltenders from Conn and Tufts 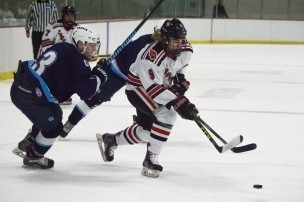 Full of energy and ready for a comeback season, the men’s hockey team ended its nail-biting season opener in a 1-1 tie against Connecticut College. Conn opened up the scoring with twelve minutes to go in the first period with a deflection from Tim DePretoro that ended up in the top shelf past Wesleyan goalie Dawson Sprigings ’17. Sprigings  was screened by several opposing players when the shot came in and suddenly changed directions.

Captain Jay Matthews ’16 tied the game with just over two minutes left in the second period with assists from line mates James Kline ’17 and Vincent Lima ’19 in a tic-tac-toe passing display. Once the game was tied, both teams ratcheted up the pace of their play and Wesleyan had an abundance of quality chances that were all denied by Conn College netminder Tom Conlin, who made an astonishing 41 saves through all three periods and overtime.

When asked who stood out from the game, Wesleyan head coach Chris Potter had an immediate and unequivocal response.

“Their goalie [stood out],” he said. “He played well last year, and he’s right back to where he was a year ago. They’ve got a good team. They’re an experienced group, so I was impressed with our four freshmen [defensemen].”

After a grueling season last year that was plagued by injuries, this year’s team features ten new first-year recruits who are ready to make their mark immediately. Lima and Luke Babcock ’19 both flourished in their debuts for the Cardinals, with several scoring chances and even a first career point for Lima, who was featured on the top forward line alongside seasoned veterans Kline and Matthews. Both Babcock and Lima come from the St. Paul’s School, which has proven to be an effective feeder for Wesleyan’s hockey program.

“Obviously [St. Paul’s] is a good school, and you have to be a good hockey player and you have to be able to balance your schoolwork, and they do a great job of that,” said Potter. “Babcock obviously went and played some junior hockey after there, so we were kind of tracking him for a little bit. They’re smart hockey players, they play with a good pace, they all shoot the puck very well. The other thing is we have an alum there. Their coach is a Wesleyan alum, so it’s always nice to have [that connection]. They came down, we stayed on those guys, and they liked it, and obviously they all know each other.”

Exhibiting an abundance of talent, this year’s relatively large first-year class will be competing for playing time. Limited to only twenty skaters who are able to dress on game day, around ten Wesleyan players are forced to watch from the stands. Known in the hockey world as healthy scratches, these players take statistics and analyze the game when they’re not playing, often providing key information to the coaches who see the game from ice-level.

“We have twenty-eight skaters, and we can only dress eighteen of them,” said forward Dominic Oliver ’19, who did not dress for Friday’s season opener. “You just got to make sure you’re ready if things change the next game. It’s nice to have enough guys that we think our scratches could play and do okay.”

Oliver also noted that competition for places is a healthy process that takes place in practice, forcing everyone to stay on their game and to continue improving.

“You just work hard, you try to prove the things you can do that you think are your particular strengths, and try to stand out that way,” he said. “But, it’s tough. There are guys ahead of everybody that are certainly deserving of playing. You’re kind of waiting for an opportunity, maybe an injury, or maybe someone has an off day.”

Defenseman Chad Malinowski ’19, who got the opportunity to play in the season opener and exhibit his powerful slap shot from the point, is glad to finally be at Wesleyan playing college hockey.

“The coaches here were great at explaining what Wesleyan had to offer in terms of academics first, because obviously when you look at a school like Wesleyan that’s what you’re getting is great academics,” he said. “Obviously the hockey program has been very, very good. Last year they didn’t have the season they wanted to have because of injuries and whatnot, but obviously the school here was the most attractive thing for me and most of the guys here.”

Going forward, the Cardinals will be looking to flourish with their new reservoir of talent in the class of 2019. There is also a good core of veterans remaining from last season, as exhibited by Kline and Matthews on the top forward line, as well as by co-captain Eric Casey ’16 and Robby Harbison ’17 on defense. Coach Potter elaborated on how Kline and Matthews are leading the way on the top forward line.

“[Kline and Matthews] are both big boys, and they can play heavy on you,” he said. “They both skate pretty good. Kline is a very good skater for that size, so he can get in on pucks, and he’s really learning that you’ve got to keep the puck and have continuity down there with his body, and tonight I thought he did that. And Jay, Jay can fire it. And you know, we’ve got a freshman [Vincent Lima] on that line right now, and I thought that he can create and he made some plays. I was happy with that line. I was happy with all of our lines. I thought they all chipped in and generated some good scoring chances. We asked some of our lines to play against their top line and they did a good job.”

On Saturday, the Cardinals fought back from one down to tie Tufts 1-1 in a game that again featured a scoreless overtime. Kline equalized in the third period after the Jumbos took the lead in the second. Tufts goalkeeper Nick Nunges made a whopping 46 saves, as the Cardinals put him under pressure all game long but couldn’t find another way past the talented goaltender.

Next for the Cards is a tilt at home versus Salve Regina University on Saturday, Nov. 28 at 4:00 p.m.