The Cards finished the weekend at .500.

This weekend, the men’s basketball team kicked off its season at home with the annual Herb Kenny Tip-Off Tournament. Coming off of the program’s first ever NESCAC championship, expectations were high and the Cardinals seemed confident that they would be able to win the season-opening tournament for what would be the fifth straight year. On Friday, the team took on Lyndon State College, seeking a win that would allow them to face the winner of Endicott College vs. Clark University in Saturday’s championship game. Alternatively, a loss would send them to the consolation game, where they would match up against the loser of Endicott vs. Clark. 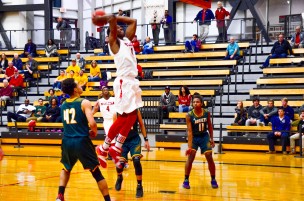 Lyndon State was able to test Wesleyan’s confidence right out of the gate. After a slow offensive start by both teams, Wesleyan forward PJ Reed ’17 put up the first points of the season by sinking a jumper from inside the arc. Lyndon State quickly found a groove on offense, however, and was able to open up a 19-12 lead. Wesleyan was able to tighten the defense a bit as the half continued, and they entered the half down by just three, with the score sitting at 42-39.

The second half would prove to be even more contentious. The Hornets were able to rebuild their double digit lead, but the Cards charged back as the game entered its closing minutes and brought the score to 80-78 in favor of Lyndon State, with just seconds remaining. After a missed Hornet free throw with six seconds on the clock, Joseph Kuo ’17 rebounded and got the ball to captain Jack Mackey ’16, arguably the team’s best jump shooter. Unfortunately, Mackey could not get the shot to fall, and the game ended with a 80-78 loss.

Kuo and BJ Davis ’16 were the Cardinals’ top scorers in the loss with 16 apiece, while Kuo also contributed seven boards. Kuo thought that the team did not show adequate effort, as they anticipated an easy victory.

“I think we underestimated how different things would be compared to last year,” Kuo said. “No matter how good you are, it’s still tough to win a college basketball game so on Friday it showed when our effort wasn’t where it needed to be.”

In Saturday’s consolation game, the home team brought a new attitude onto the court against Clark. After falling behind 13-6 in the early goings, the Cardinals flipped a switch and entered the locker room with a 39-37 halftime lead. Though the Cougars kept the game close for most of the second half, they would never regain the lead and Wesleyan cruised to an 81-67 victory.

Davis led both games in scoring at 23, shooting an impressive 12-13 from the free throw stripe. His ability to draw contact was crucial in forcing multiple Cougars into foul trouble. Sharpshooter Harry Rafferty ’16 was also important in this regard, hitting all nine of his free throws along with three triples to end up at 20 points. Rashid Epps ’16 was efficient, scoring six points on just five shots to go along with nine rebounds and a pair of steals. Kuo had a bit of an off game, but still managed to put up eight points and six rebounds. He said that the team played better because they considered the game a must-win.

“The thought of being 0-2 was all the incentive we needed,” Kuo said. “We know now that we can’t overlook anybody and have to treat all games the same way. I think that loss put some much needed pressure on us.”

He also commented on some of the weekend’s more positive aspects, highlighting some solid play by his teammates.

Davis explained what went well for him, and also credited his other teammates for their solid play.

“I think I was able to get it done through my teammates,” he said. “They trusted in me to make plays and they did a great job finding me when I was open. We had a height advantage so their focus was on stopping our big guys so it really opened up the floor for the guards. I also think [Rafferty] having a great game with 20 points played a big factor because it made it tough for Clark to make decisions on who to focus on defensively.” 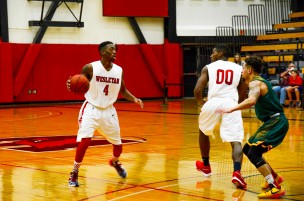 The team gels on and off the court, and forward Kelly Hogan ’19 explained how having such a tight-knit group differs from his high school experience.

“It’s very different,” he said. “I went to a private school where kids commuted from all over. Here we are around each other much more and do a lot of things as a team that weren’t really possible in high school. We are very close as a team.”

He also commented on how invaluable Mackey’s leadership is to the team.

“I think Mackey is our clear leader,” said Hogan. “He is our captain. Other players definitely assert their influence, but Mackey is basically an extension of Coach Reilly.”

Thanksgiving break will be a busy one for the Cards. On Tuesday, they will head to Bard College for a tilt against the Raptors. Over the weekend, the team will participate in the Union classic tournament at Union University, in which they have drawn a first round matchup against Clarkson University.