A.O. Scott traces the relationship between art and criticism 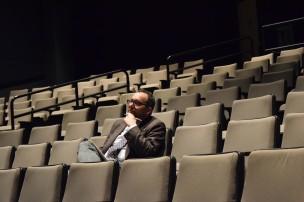 Armed with only a pen and a thin red notebook, A.O. Scott is kitsch’s worst nightmare. Currently the New York Times’ Chief Film Critic alongside Manohla Dargis, as well as a distinguished professor of film criticism at Wesleyan, Scott came to campus on Thursday, Nov. 19 to defend the professional film critic—as well as criticism in and of itself.

“I want to clarify and defend what criticism is, what critics do, and what it’s for,” Scott said. “How do we know something is good? How do we trust or not trust our own taste, or other people’s tastes? On the one hand, there’s this idea that it’s all subjective, you can’t really question or argue with anyone’s judgment, we all have our different tastes and our different feelings about things, but then, we say that, but we’re also persistently arguing about these things.”

Both in his talk and an interview with The Argus, Scott cited Oscar Wilde’s notion of the critic being an artist. In fact, there is an entire chapter in Scott’s forthcoming book, “Better Living Through Criticism,” that is devoted to this subject, titled “The Critic as Artist and Vice Versa.” Although the profession of paid critics is relatively new, art and criticism, Scott argues, have depended on and benefited from each other from the very beginning.

“I think that criticism is something that’s part of the creative process, it’s part of the way culture is made, so I wanted to see if I could define and defend it by looking at what it’s been at different points in history and how it’s worked in different art forms,” Scott said.

As for how the critic is an artist, Scott argued that the two notions are not mutually exclusive.

“As anyone who has taken my class will tell you, we read a short essay by H.L. Mencken about criticism in which he says the motive of the critic is not philosophical or pedagogical, but it’s creative, that what motivates a critic is what motivates any other artist, which is the desire for self expression, the desire to take what you’re thinking and feeling and give it a form,” Scott said.

Elaborating on one of his central arguments, Scott deconstructed the notion that criticism is secondary to art, citing Oscar Wilde.

“The difference is that the raw material that criticism works with is other art,” he said. “I’m also very influenced by an essay by Oscar Wilde called ‘The Critic as Artist’ in which he makes the somewhat hyperbolic but I think persuasive case that criticism, rather than being something that follows the creative act, or after artistic creation, is in fact primary to it, in a way comes first—that there’s no creation without criticism.”

He also noted that artists, and art itself, are not as autonomous in terms of their relationship to criticism as they often seem.

“One of the things that any artist is working with is other art. You think about filmmakers, for example, and they all start out as film fans. You have Martin Scorsese as a kid going to double features every day and absorbing all of the world in that way, and then thinking about Quentin Tarantino in the video store,” Scott said. “In the simplest way that you see something or you hear something, and you start thinking, ‘How did they do that? Could I do that? Could I do it better? How would I do it differently?’ All of what we identify as aspects of the creative process, the absorption of influence, the learning and discarding of rules, the workshop discipline of figuring out what works and what doesn’t and how—all of that is criticism.”

In the long term, Scott may become better known for his defense of criticism, but many know him best for his sometimes ruthless and at times humorous reviews of what he deems to be bad movies. Before going into considerable depth about what kind of movie deserves a complete pan, Scott took a moment to defend his reputation.

“I am the nicest, kindest, gentlest film critic! I don’t know where I get this reputation from,” he said.

Then his infamous “Entourage” review came up, and he elaborated on why some movies deserve the full wrath of A.O. Scott.

“The question of what kind of movie deserves the full measure of contempt is one that changes,” Scott said. “I think that’s where I’ve mellowed a little bit with age. I mean, there’s never a shortage of bad movies. It’s just true. Most human effort results in mediocrity, it’s just the tragic fact of the human condition. The question is, though, how mad are you gonna get about that? If a movie is small, and well intentioned, and unsuccessful, you have to say so, but you can try to be a little nicer. You don’t have to take personal offense.”

“There are some movies though, I have to say, ‘Entourage’ being one of them, that just piss me off. And I think, you know, goddammit, what are these people doing? It’s just so awful in so many ways. I mean, I approach every movie that I go to see with an open mind and with respect for the work that’s been done. It’s hard. I don’t have to tell anyone here, it’s very hard to make movies, and nobody sets out to make bad movies, except when it seems like maybe they do, or they didn’t care, or there’s kind of cynicism or contempt for the audience or dishonesty. I have to feel like there’s some, not just artistic, but you might say moral failure involved for me to go after a movie the way I went after ‘Entourage.’”

Starting out in literary academia and subsequently literary criticism, Scott actually began his career on the path to teaching literature. However, he is a proud graduate school dropout, and was eventually discovered by The New York Times after working in literary criticism with only some experience in film criticism. His ambitious debut in Slate from 1999, however, acts as proof that his relatively small amount of film criticism was already far above average.

Scott also opened up to The Argus about why he chose Wesleyan, and why he chooses to teach in the first place.

“Why teach is a good question, because I used to do it a lot. I was in graduate school, and I was on kind of an academic path, and about twenty years ago I stepped off that path into the work I’m doing now,” Scott said. “I really missed teaching.”

One of the most refreshing aspects of pedagogy that brings Scott to Wesleyan is the students themselves.

“I always liked [teaching] partly to get out of the newspaper bubble to talk with younger people who are maybe less cynical and more open minded than middle-aged journalists,” Scott said.

Underscoring that Wesleyan has one of the three best undergraduate film programs in the world, Scott said that Professor Jeanine Basinger had a major influence on his choice to come to Wesleyan.

“Some years ago—I don’t remember exactly when—I was on the radio doing some NPR show and I was on the phone, and the other guest was Jeanine Basinger, who was on the phone somewhere else,” Scott recalls. “After it was over, we were kind of chatting, and she said, ‘Would you ever want to come teach at Wesleyan?’ And I said, ‘Sure, someday.’ I wasn’t quite ready to do it then, I just couldn’t quite find the time or the energy. Every year she would kind of come back and ask again, as she’s known to do. She’s persistent in the best way, and she said, ‘Well, how about now?’ at a certain point a few years ago and I said, ‘Why not?’”

For Basinger, Scott was the critical missing piece in the film department.

“I don’t know anybody who I have more respect for as a writer, a film lover, a film goer, and a film reviewer as A.O. Scott,” Basinger said. “He was my dream guy, and I got him.”

Fifteen film majors will be lucky enough to take Scott’s course this spring. Scott departed with some advice for aspiring critics in any genre.

“As long as criticism involves the active operation of your intelligence, and your judgment, and your taste, then it’s good,” Scott said. “Then you’re doing it right.”