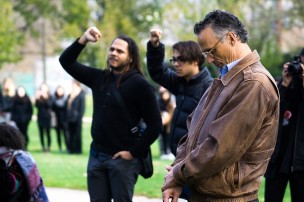 Vice President of Equity and Inclusion and Title IX Officer Antonio Farias has issued a response on a web page under the Office of Equity and Inclusion’s, titled “Equity: Next Steps,” campus equity and inclusion, following the official publication of the Is This Why movement’s demands.  The initial demands required a statement from Farias and University President Michael Roth addressing each demand within 48 hours of their being issued. Roth responded in a campus-wide email last week, approximately two days after the initial demands were made. Farias’ post, published Tuesday, Nov. 23, begins by addressing his desire to increase efforts to create a more inclusive campus environment for marginalized groups.

“In these troubling times, when campuses across the nation are grappling with institutional racism, I continually ask myself what more we can do to ensure that the lives of all of our students, and in particular our students of color, are free from discrimination that harms their experience at Wesleyan,” Farias wrote.

In his message, Farias addressed a few specific measures that he and the Office of Equity and Inclusion aim to undertake in the next year. First, he announced that the Title IX Core Team would soon implement an expansion of the oversight on discriminatory behavior. The practices he intends to implement were recently shared with student organizers, faculty members, as well as the Board of Trustees.

“We will be scheduling recurring community town halls, forums, and focus groups in order to take a robust accounting of current needs as well as to tap the vast community expertise we possess in the service of creating sustainable and significant changes designed to enhance our individual and collective ability to thrive,” Farias wrote.

He also announced the immediate implementation of Maxient, an online reporting service that allows for the documentation and investigations of occurrences of bias and discrimination.

“We cannot fix what we cannot see, and it is apparent from the heartrending stories I’ve heard from marginalized students that our system of documenting and investigating instances of discrimination is not sufficiently understood and used across the campus,” he wrote. “Reporting is an essential first step to get at the root causes of discriminatory behaviors that are caustic to the learning process.”

For the spring 2016 semester, Farias and student leaders are currently discussing the establishment of a report similar to the Annual Report on Sexual Violence that provides information on the campus community, which will be made public via the Office of Equity and Inlclusion’s website.

Farias’ final two points referred to specific dates by which the administration will achieve certain goals. The first involves a report on the campus community, similar to the annual Title IX report, to be issues beginning in spring 2016. Currently his office is in talks on how to best accomplish this goal. The second timeline refers to the filling the position of Dean of Equity and Inclusion, vacated earlier this month when Renee Johnston-Thornton was appointed Dean of the Class of 2018. Farias indicated that the position would be filled by February.

Farias concluded his message by reaffirming his commitment to equity and inclusion on campus.

“I look forward to working with the entire Wesleyan community to address the damage caused by prejudice, discrimination and marginalization and to build on achievements characterized by openness, courage and perseverance,” he wrote.  “As many of you know, my staff and I have an open door policy, and we encourage everyone to take advantage of it even as we proactively reach out to our broad and diverse community.”

A previously updated version of the original article continues below.

In response to the list of demands that students of color and allies presented on Wednesday, Nov. 18 during a march outside of South College, University President Michael Roth sent a campus-wide email addressing each of the points around 10:30 a.m Friday morning.

By Saturday morning, organizers of the #IsThisWhy campaign released a brief statement online in reply to Roth, stating that his email insufficiently answered their concerns and promising further demands of the administration.

“President Roth’s response proved him incapable of addressing exactly how the university has neglected each marginalized community on campus both in the past and in the present, and in doing so, he failed to produce a detailed action plan committing to the demands set forth by the #IsThisWhy organizers,” the statement reads.

The statement asserted that, although Roth did respond within the 48-hour deadline listed in the original outline of demands, Vice President for Equity and Inclusion Antonio Farias failed to provide his own statement of accountability.

“This campus cannot function without the intellectual and emotional labor of Students of Color,” the statement continues. “As promised, we will be taking further action. We will be demanding more. We know our power.”

No specific plans for the campaign’s next steps have been released yet. The Argus has reached out to campaign organizers, Farias, and Roth for requests to comment, and will update this article with any additional information.

The Argus’s original article continues below.

On Wednesday, students of color and allies stood in solidarity outside of Roth’s office as five student leaders read out demands for equity and inclusion, a statement of accountability for the administration’s handling of racial issues, the hiring of an equity advocate, the establishment of a multicultural center and director of multicultural affairs, and the implementation of a system to track faculty bias and micro aggressions. Over 85 student groups have signed onto the demands. (Disclaimer: The Argus is among the student group signatories.)

As stated on IsThisWhy.com, created by organizers, those demands included the stipulation that Roth must provide a response and make certain commitments within 48 hours, at which time, if the demands were not met, further action would be taken. The campus-wide email arrived approximately 90 minutes before the deadline.

According to the email, Roth and his cabinet have spent the past two days reviewing each demand. To begin, he recognized the shortcomings of the University in their efforts toward equity on campus.

“While Wesleyan has long fought against discrimination in many of its forms, it is clear that we have also perpetuated some of them,” Roth wrote in the email. “We must not look away from this. As an educational institution that depends on free inquiry, it is our duty to do more.”

Then, Roth launched into his response of the demands, addressing them one-by-one.

“First, the demand for equity and inclusion, we embrace wholeheartedly,” Roth wrote.

He continued to add that most issues brought up in the demands connect back to the need for equity and inclusion at the University. Second, Roth gave a statement of accountability for the ways in which he and his administration have failed to meet students’ needs in terms of racial sensitivity on campus. 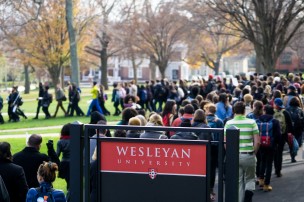 “I understand that some feel I have defended those in positions of privilege at the expense of others,” the email reads. “This has never been my intention. Sympathy is selective, to be sure, but I am happy to recognize that the circles of concern in the Wesleyan community are very broad. Indeed, as I write this many of us are focused on the hostage situation in Mali, yet another in a series of brutal terrorist attack.”

Further, Roth recognized the importance of freedom of expression and the need to recognize each student’s access to this right.

“I will continue to support those who want to speak out with views that may be at odds with the campus mainstream,” he wrote. “That’s a simple commitment to free speech, and I view it as core to the educational enterprise.”

He elaborated on this idea by informing the community that Associate Professor of History and Director of the Institute for African American Studies at University of Connecticut Jelani Cobb, who has expressed a different view of free speech in articles written for The New Yorker, will visit campus on Dec. 2 to meet with students and faculty. The ultimate goal for this meeting is to have students and faculty engage in a conversation regarding these issues and learn from one another’s ideals.

“There are many ways in which I (and frankly, everyone at the University) can benefit from criticism,” Roth wrote. “It’s how we/I learn, and that’s what a university is about. By learning from one another, from keeping our conversations robust and meaningful, we will become a more equitable and inclusive place”.

In response to the third demand—the hiring of an equity advocate to address the needs of marginalized populations on campus—Roth affirmed that the University has already taken steps in this direction, but will take into account student input to determine how to best address these needs.

“The proposed job description in the third demand is for an equity advocate, and it includes things that some staff are already doing,” Roth wrote. “We will learn from students what needs are not being met now and what particular programs would be most helpful in the future.”

Additionally, Roth described the imminent hiring of a Counseling and Psychological Services (CAPS) staff member with inter-cultural expertise, in order to both expand CAPS services and address the needs of a wider range of students.

“We authorized this position because dialogues with students identified a strong need, and we will continue our discussions about additional resources that will help all thrive at our university,” the email reads.

Roth responded to number four, which calls for the establishment of a multicultural center, by stating that the administration is interested in moving forward with discussions regarding the space it would occupy and how it would be staffed.

“We have some ideas in this regard, but we need more detailed student input before moving forward,” Roth wrote. “We will be convening a group of staff, faculty and students early next semester to make recommendations. Before the end of this academic year, we should have plans we can implement. As we develop these ideas, we will want to know how we will be able to determine if such a Center is successful.”

“We have to communicate better about our existing resources, because students already have the ability to report such incidents through Maxient,” Roth wrote. “In addition students can use their course evaluations to describe these issues. We currently are running a pilot program for a new course evaluation form. I have asked the Provost to scan current evaluations for incidents and patterns, and we commit to using our reporting vehicles for evidence of troubling trends.”

Finally, Roth acknowledged first-generation and low income students on campus, pointing out that, while not directly mentioned in the demands, these students are a vital part of the community, and often their struggles go unaddressed. He highlighted the administration’s plans to focus on the needs of these students.

“We are working on plans right now to ease the economic burdens on those of our students most vulnerable to financial exigencies,” Roth wrote.

Roth concluded the email by stating that he sees himself and the marchers as having the same goals. He expressed his hope that the community will be able to work together to achieve these common goals, and vowed to continue to work toward a more equitable campus.

“Although we will not always agree on how to frame particular issues or which tactics are most effective, I do not see the marchers and myself as adversaries,” the email reads. “At the beginning of this week I ‘encouraged Wesleyans to stand up and make themselves heard.’ I vowed to listen, and I will continue to do so. We now have more concrete tasks in front of us. With your continued support and input, we will continue our work and together make progress on these crucial issues. We will not look away from this.”

This article will be updated with additional information as the story develops.