Students of Color and Allies Present Demands to Roth

Students of Color and allies marched from Foss to South College to read demands for the Univeristy to immediately address equity and inclusion on campus. 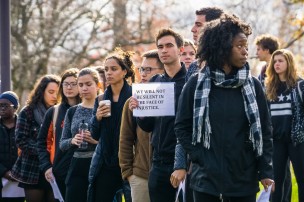 As part of a National Day of Solidarity on Wednesday, Nov. 18, students of color and allies marched in solidarity to present a list of demands to University President Michael Roth outside of his office at South College. On the event’s public Facebook page, few details were given regarding the proceedings of the event. Still, students, wearing all black, responded enthusiastically and organized into a five-line formation, each behind an appointed student leader.
“Join us at the top of Foss Hill in national solidarity with Mizzou, Yale, Claremont McKenna, and all other universities across the nation who are facing institutional inequities,” the event page reads. “During this gathering a photo will be taken to be sent to these universities and posted to demonstrate our support.”

Each cross-section of five proceeded with arms linked down Foss Hill, in front of Fayerweather and Usdan, and around to College Row. Along the way, students voiced their frustrations with calls of “SOC Matters,” “AFAM is Why,” and “No Justice, No Peace.”

“Thank you all for joining us today on this National Day of Solidarity with all colleges and universities throughout the United States and extending to South Africa,” James said. 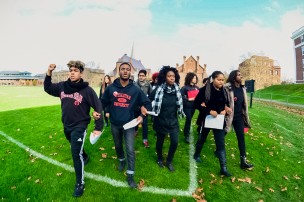 Then, Kenny Navedo ’18 continued by introducing the demands.

“President Michael Roth, past presidents, and the bureaucracy of this institution have actively neglected to address issues that pertain to students of color and empower them with the same level of resources, consideration, and inclusion historically available to white students,” Navedo said. “Thus, we present the following demands.”

This statement, along with the complete list of demands, can be found at isthiswhy.com, as can updates, information, and a list of student groups who have signed onto the statement.

The first demand is for equal and inclusive treatment.

“We, members of  the student of color community (SOC), demand to be holistically included as part of Wesleyan University’s student body, to have our demands heard on campus, and to be recognized and respected as individuals, not simply as numbers to fill the institution’s diversity quota,” the statement reads.

The second demand is for a written statement of accountability to be produced within 48 hours, co-signed by President Roth and Vice President for Equity and Inclusion and Title IX Officer Antonio Farias, stating what the University will do to address the demands. Required in this statement is a declaration of past inaction in terms of equity and inclusion, as well as commitments to transparency and to the creation of a plan of action.

The third demand is that University hire an Equity Advocate in the Office of Student Affairs, an individual appointed specifically to address the needs of marginalized populations on campus. The intent to launch the hiring process in the spring 2016 semester also must be made within 48 hours.

“The Equity advocate will work under the Office of Student Affairs to engage with students regarding equity within the confines of race, ethnicity, class, gender, sexuality, age, religion, culture, gender-identity, and physical or mental disability*….” the demands read. “The hiring of this equity advocate should involve a board primarily composed of underrepresented students, with full transparency and disclosure throughout the hiring process.”

Fourth, students seek the establishment of a multicultural center and the hiring of a Director of Multicultural Affairs. The statement acknowledges the existence of the Center for African American Studies and the University Organizing Center, but states that these resources do not serve as a viable substitute for an actual multicultural center. It also sets forth a timetable, that, if followed, would open the center by fall 2018.

Finally, the students demand that the University commit to the monitoring of faculty bias and microaggressions through student reporting—a system which is to be devised by Nov. 30, 2015—and through the opportunity to identify potential sources of bias in end-of-semester evaluations beginning in the Spring 2016 semester.

Following the reading of demands, students assembled for photos outside of Olin. The first photo featured all students who marched, and the second featured students of color specifically. The photos will be sent to other university student groups fighting injustices on their campuses in a display of solidarity.

In response to the declaration of demands, Roth issued a statement on his blog. Roth, who joined the procession as demands were read, reaffirmed his belief that his goals and those of students of color and allies do not differ greatly.

“Although I realized the awkward dimensions of my presence at the march, I share the major goals of this group and decided to join in their call for justice and community,” Roth’s statement reads.

He continued by stating the University’s intent to do better in realizing these goals.

“I, too, recognize that many students from under-represented groups face significant obstacles on our campus,” the statement reads. “And I know that there have been times when I or members of my administration have contributed to the perception that we didn’t understand the challenges faced by students who come from a wide variety of backgrounds with an even wider variety of interests. We can do better, and we will.”

Shayna Beaumont ’19 addressed the importance of the movement’s having a continuing presence on campus as well as continuing support from the student body.

“For non-students of color, this is not a trend,” Beaumont said. “This is real life for some people, and I think it should stop here, and if you really feel passionate about Black Lives Matter and #IsThisWhy, then you should be willing to put your life on the line for it.”

“In light of everything that’s been going on across the country, college campuses, universities, with race becoming so heavily prevalent, it’s important that we do this here at Wesleyan, because… we just need to be active, not sit and be passive,” she said.

Later on Wednesday, upon request, the demonstration’s organizers released an official statement addressing their goals and plans for further action.

“The demands we make today attacking systemic racism echo the calls for institutional initiatives at other colleges and universities across the country,” the statement reads. “These collective demands, along with thoughtful implementation and consistent, transparent communication between students of color and the administration, mark the beginning of the end of tolerated institutional inequality. The administration at this institution should be prepared for further action if these demands are not met. For more information on our demands and to stand in solidarity with us, please sign on to the growing list of organizations supporting us at: isthiswhy.com.”