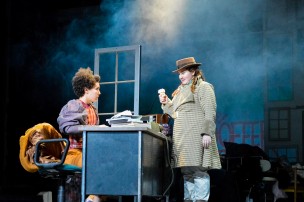 This week, The Argus sat down with Edward Torres, Visiting Assistant Professor of Theater and director of this semester’s theater faculty show “Marisol,” written by José Rivera. He was accompanied by his two assistant directors, Alexandra De la Cruz ’17 and Russell Goldman ’17. This is Torres’ first time directing a collegiate production, having previously directed productions in the Steppenwolf and Goodman Theaters in Chicago. More recently, his production of “Macbeth” was performed in prisons and shelters as well as the Public Theater in New York.

The Argus: Why “Marisol”? Why here, why now?

Edward Torres: “Marisol,” I thought, was a really good place to start, with this being my first time here at Wesleyan. It was a good choice only because there’s so many different characters, and the script, I think, has something really important to say. And Wesleyan seems like a wonderful liberal arts college: issues are always current, political in terms of the drive of the students. So I felt like, “You know, this might be a really cool piece to do,” because this piece politically has some really interesting things to say, and it’s also universal in its context, so I think it’s something that everyone can enjoy and be affected by.

A: This is your first time directing students, correct?

ET: Actually, this is not my first time directing students. I’ve directed students in lab, not a full production. But in certain classes. I’m directing every Monday, going to NYU…but in a full environment, where I’m engulfed in it, with the students and stuff like that, this is my real first time.

A: So does that work, when you’re now directing students and working with assistant directors who have classes?

ET: You know, I think it’s really neat, because I have the opportunity to convey and give something back that I’ve learned in the last 20 years. You know, so people who I think are really talented and people who care and are really passionate about the art of theater and storytelling. And to me that’s a really exciting thing. I’ve never had that. Like, this for me is an immersion program. So I’m fully immersed.  And I had the option of, “Oh you can have, like, this designer from this,” but all the major elements for this piece are all done by students. Which I think is really neat. Because they have something to bring to it and I learn something from them as well. It’s a really good exchange and collaborative effort.

A: There’s been excitement on campus because it’s a play written and directed by people of color as well as mostly starring students of color. Has that influenced the rehearsal process in any way in how you approach the text?

ET: Well, if you look at the cast, the cast is a complete reflection of this campus. So I feel very proud of that fact, that we have a diverse cast, and diverse not only in the storytelling part but in the creating it. So for me, that’s the exciting part of it. If I can bring that kind of excitement to the school, then I also learned something interesting from it too.

A: This show involves different multimedia aspects. You have originally composed music; you have projections of video recordings of New York City. Could you talk a little bit about the process of bringing that together?

ET: Ah, let me see, that’s a very hard process. [Laughs.] I think Russell can address that, and Alexa, also. I also have an MFA in Film, so the thing is, I like to incorporate as much original stuff as I can possibly do, as long as the play requires it. Doing media in theater is very difficult, if only because it has to come from a place where the story is being told clearly, or it doesn’t work. And I’ve had many experiences where it doesn’t work, where I’ve actually had to cut things out because of it. But in this play, I think, having multimedia enhances the story, makes the story clearer. And it doesn’t get in the way of the storytelling. So having Russell go through New York and shooting stuff on a—what do you call that camera?

ET: The GoPro camera, which is really kind of cool, and having go to New York, like, every other week and, poor guy, has like 500 other things to do, but, you know, just shoot for a few days, just walking around New York, and having to also edit that and also put that together is something that’s, I think, really hard. It’s like with the music, how do you take music that reflects the play, we can either take music from the radio or we can compose our own music, and Anthony Dean [‘17] is doing that. He’s doing some really wonderful work in that as well. So putting those elements together, tying to the story, and now, you know, we’re about to go into tech. So we’re gonna see if that music and that footage ties in with the play, and the really cool part about that is we only get a few days to do it. You can’t spend a whole week on it, it’s just like a couple of days. So we will be going, like really mixing it up and trying to figure out what works where and what doesn’t work and having to decide do we keep it or do we lose it based on what we’ve created in rehearsal.

A: That ties a little into my next question. You have so much going on in the text itself. Without spoiling anything, how do you demonstrate the [indemonstrable]?

So we’ve done some really interesting things. We’ve held interviews with actors individually, once we’ve cast the play, we’ve held interviews about how they have read the play, what do you think of the play, where do you think this character fits in and where do you think this character is starting from A to Z, where does he or she end up? And so we have those conversations first and after that we start trying to tell the story of the play, and so when we start rehearsing and now we say, “O.K., this scene is about this,” right? We break the text down, allow the actors to get up on their feet, and convey with the understanding that we’re all on the same page on that scene itself and the story within that scene itself.

So that’s also a really interesting process because we have people in the cast that are very different, their experiences with theater are different. Some of them have been doing it for a while, some of them have not done it at all, some are completely new to it, but they happen to be right for the character in the play. So that’s been also a lot of fun.

A: As you’ve said, you’ve worked in Chicago and have directed at nearly every major theater there. How has your experience, both growing up there and working there, influenced your process here?

ET: I think for me, Wesleyan’s student body is very, very talented; very, very smart. They do a number of things, they’re so multifaceted. That kind of blows me away. You know, because they’ve got shows at Second Stage and at the ’92, and then they write their own thing, and a lot of them who are acting also design and stage manage. I’m truly impressed, as I’m sure these guys will tell you.  And so, for me, it’s really cool to see, ’cause like, when I was in college, it was just one track. But there are many different tracks here. And it’s not that they’re held to it, it’s that they wanna do it, which to me, there’s a lot of passion and creativity there in that. It’s something they really wanna do, so they take on a lot. So it’s great to see that.

A: Anything else you want to add?

RG: Eddie called me in August to work on this play. And the day he called me, I read the script because I was really excited. I was like, “What the fuck is this play? This is a crazy play, the language is so everywhere,” because I’ve also never read a José Rivera play. And so a lot of this process has been just getting people together to tear this text to make it the most succinct and help the actors resonate as much as possible. Like, this is what happened when I worked with Aidan [Winn ‘18] yesterday. It was like, “This language is so lofty, I don’t really know how to ground it.” And the whole process has been about grounding this text that kind of tries to cover God, all of humanity, everything we do: sex, love, violence, and concepts that were vital when he wrote this in ’93 but have not lost anything in 2015.

ADC: I think that’s been really rewarding. Seeing the depth and the amount of honesty we’ve been able to explore with the piece, because it’s a piece with a lot of delicate things in it, so there’s a lot of things you have to know how to treat carefully. So we’re trying our best to do justice to the text, because it’s an intense text, and I feel like there’s a lot of responsibility that we’re given. Making this whole production and these actors say these things and there are things that should be treated very carefully because they’re not things [that] go about every day.

RG: There’s a lot in the show that can be played as absurd or crazy, and there are parts of the show that remain absurd and crazy, but, like, there’s a whole scene where one of the male leads is pregnant and gives birth. And there’s a lot of delicacy there because that can’t really be played for laughs. That has to be played with everything as grounded as much as possible.

ET: And I’ll just add this, that collaborating with Alexa and Russell has been great because I also feel like I’m not the kind of person who says, “I need a cup of coffee. Go get it.” So when you’re talking about the term “assistant director,” it’s not assistant to the director, it’s assistant director. And so they, I think, I have been really instrumental in the process in being able to build the show together. I trust them fully so when I’m not around, they can run the room, and they have run the room. They both have. So I think it’s about actual collaborative exchange that’s not about titles. It’s actually way above the titles. They’ve also guided the process; I don’t think I’ve been in the room alone with myself.