The Argus examines the secret society with custody of the infamous cannon. 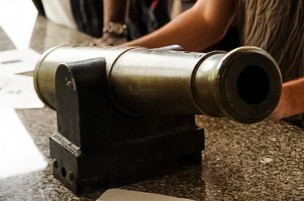 The University is host to a number of not-so-secret societies, including Skull and Serpent, Mystical Seven, and Theta Nu Epsilon. Perhaps the most mysterious is the Douglas Cannon Society, known only for its association with the lone campus cannon.

The Cannon Society has taken responsibility for multiple sightings of the Douglas Cannon, a brass cannon at the heart of one of the University’s longest-running pranks. The cannon itself is a relic from the mid-19th century, when the University was in session during the Fourth of July and celebrated the holiday with a student-led volley of cannon fire.

After the academic calendar changed in 1859, the University incorporated the campus cannons into annual festivities for George Washington’s birthday. An intense interclass rivalry developed between the first-years, who were assigned to fire the cannons on the morning of Feb. 22, and the sophomores, who tried to thwart the first-years’ efforts. The clashes evolved into a tradition known as “cannon scraps,” which became so extreme that by 1916 the student body voted to discontinue the use of the cannons.

During the 1867 cannon scrap, the Douglas Cannon was borrowed from a local artillery regiment named after former Middletown mayor Benjamin Douglas. The cannon was given to the University as a gift at the turn of the century, and in 1931, it was filled with lead and installed in what was intended as its final resting place on campus.

But 26 years later, a mischievous group of students hacked the cannon away from its pedestal and began placing it in locations around the world. The cannon has traveled to New York, Iowa, Washington, D.C., London, Paris, and Venezuela and was almost part of a delegation to the U.S.S.R., according to the University’s blog and an online exhibit from Olin Library’s Special Collections and Archives.

The cannon has also materialized at several University-sponsored events. In 1981, the cannon was baked into the University’s sesquicentennial birthday cake, and in 2007, it made a brief appearance during President Michael Roth’s inauguration reception. In 2012, former Argus editor-in-chief Claire Bradach ’15 speculated that the cannon had come under University control.

Previously, during the 1960s, a group called “Cannon Retrievers United South of Heaven” (CRUSH) had claimed to be the cannon’s handlers, sending letters to The Argus detailing its whereabouts. In 2000, a group called  “Cannon Liberators Aiming West” (CLAW) took over the role. The two organizations may have been precursors of the current Douglas Cannon Society, which has also reached out to The Argus about the cannon’s location (and recently began communicating with wesleying). Last spring, the Society shared what appears to be a photo of its members, their faces covered by black hoods.

Unlike members of other secret societies, who reveal themselves by wearing pins on their gowns during graduation, members of the Cannon Society never disclose their identities. Today’s Cannon Society has approximately 10 members, making it the smallest secret society on campus, an anonymous source explained.

“The fewer members, the fewer people know we exist,” the source said.

According to a second source within the group, the Cannon Society is a senior secret society, with new members initiated during their junior year. Initiations are normally held in the spring, but there might be a second initiation if a selected member is abroad during that semester.

Aside from its guardianship of the Douglas Cannon, the Society’s purpose is unclear, leaving some students to wonder whether it functions as much more than a social network.

However, the Cannon Society seems to have had an affiliation with WesUnity, a now-defunct student group. While active, WesUnity was a “student-run organization which maintained a compendium of links and news relating to activism on the campus of Wesleyan University as well as links to national and local resources,” according to WSA archives.

Vice President of Student Affairs Michael Whaley hinted at the connection between the two groups in an email to The Argus, describing the mission of the Cannon Society as highly similar to that of WesUnity.

“The members [of the Douglas Cannon Society] are dedicated to discussing campus issues and building bridges on campus to promote unity and enhance the sense of community,” Whaley wrote.

Yet WesUnity is best known for hosting concerts, such as Girl Talk in 2008 and Matisyahu and Chiddy Bang in 2011. The latter was announced to campus in an email titled “Douglas Cannon” and prompted so much controversy over its funding—$55,000 allotted to WesUnity anonymously—that the WSA’s Concert Committee was forced to reevaluate its bylaws.

In 2013, WesUnity created a Twitter account with the description “DUGG LESS CAN NAAN.” That same year, the group hosted “Chalk de Franzia,” an event to protest the University’s bans on the Tour de Franzia and chalking on campus.

But when asked about the link between WesUnity and the Douglas Cannon Society, the sources declined to comment.

Likewise, the current WSA, despite having provided funding to WesUnity in the past, denies any involvement with the Cannon Society.

“Neither the WSA nor the SBC at large funds or [has] any knowledge of funding the Cannon Society,” said WSA Office Manager Arpita Vora ’16. “I don’t think we fund any secret societies, actually.”

“The SBC doesn’t knowingly fund the operational costs of exclusive societies, [which] includes secret societies,” Vargas wrote in a message to The Argus. “[But] I can’t speak to any funding before 2013, when OrgSync was first instituted.”

So who are the Douglas Cannon’s elusive custodians? What will they cook up next? And whose money will they use? These are questions that only the Society can answer.