“Hotline Bling” has become the inescapable hit of the fall. 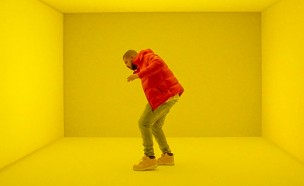 One of the most intriguing aspects of modern media is that lines between forms of entertainment are blurring increasingly. The most recent manifestation of this phenomenon is Drake’s ubiquitous “Hotline Bling,” which has pervaded our culture to such an extent that whether you’re hearing the song at a party, or watching Drake play Wii Tennis in a meme, it’s virtually impossible that you haven’t interacted with the track in some way. It has somehow managed to reach into every nook and cranny of popular culture, demonstrating that art, and everyday life are inextricably intertwined, and that artists no longer remain in the realm of the media they create.

Snapchat’s NESCAC live story showed us just how many people in the liberal arts school league were dressing up as Drake from “Hotline Bling” for Halloween; a slew of artists ranging from Justin Bieber to Erykah Badu have covered the song; and iterations of its video have appeared in countless memes, and gifs throughout the Internet. A friend of mine sighed today, “I just want all the hype about ‘Hotline Bling’ to die down!”

What is it about the track that makes it so universally present, so adaptable to different contexts, and so deeply entrenched in every aspect of our culture? A recent “New York Times” article pointed to one reason by drawing attention to an interesting phenomenon in the song’s music video: Drake dances in front of blank, colored backgrounds, usually by himself or with one other person, and moves in vague, unspecific motions. He wears a gray turtleneck, bright red coat, and Timberlands (note the ease of duplication for a last-minute Halloween costume). The article’s author, Jon Caramanica, claims that the video is essentially created for memes, the Internet phenomenon that takes small clips, or images, and applies them to various situations, or phrases (I actually found a meme pretty hard to define, so I looked it up and found that the word holds a more general connotation – it’s defined as “an idea or concept that spreads from person to person throughout culture”).

What are the implications of the process I’ve decided to call the “self-meme”? Moreover, what does it mean for us as consumers of culture that an artist has deliberately handed us the reins, and purposefully made his image available for our manipulation? The idea of a meme implies that we control the way we engage with the media we observe:–anyone can take an image, or clip, and recreate its context.

But now, Drake has taken this control back. He self-memed, offering audiences an image pared down to its utmost simplicity with the expectation that they will recreate it over and over again in countless contexts. We have this perception of creativity, and self-agency, but what we don’t realize is that often these little pieces of media were deliberately designed for us to play with. They’re marketing strategies that enable images of celebrities, actors, and artists to appear even more pervasively on the Internet, in places they didn’t even have to deliberately seek out.

Drake is executing the ultimate publicity initiative by pushing his influence into realms outside of his music, and celebrity status. It’s a marketing strategy for his image to appear even more pervasively throughout our culture, and often in contexts that he wouldn’t even know to appear in. All he has to do is dance in front of a minimalist background, and then sit back, and watch as Internet browsers do his PR for him. The self-meme is nothing more than the latest ingenious market ploy. And we don’t even realize we’re part of it.

The meme isn’t the only way “Hotline Bling” inserts itself into pop culture. Its unmistakably simplistic, and catchy beat makes the song recognizable from the instant the track begins, and continues ceaselessly, but quietly throughout its four-and-a-half minute duration, only fading to silence after all other sounds have ceased. It’s simple enough that it has prompted an incredible range of artists to cover, and remix the track, indicating Drake’s lofty status within the music community, and its persistent approval, and support of his work. Rolling Stone even called the video’s choreography “charmingly goofy”, and created a list of some of the many covers that details each version’s nuances, and rates each out of five stars.

I should mention that none of this is to negate any of Drake’s work. He undeniably has remarkable creativity, and skill, and I don’t doubt that the simplistic sound, and video of “Hotline Bling” is partially an artistic effect that he, and his various creative resources decided on. This is simply to call attention to the fact that it’s also enabling him to reach an astoundingly vast audience, and enter into culture across the board to an unprecedented extent, in a way that would be impossible without modern technology, and the mindset of today’s society. It’s also to point to our lack of awareness that we actively participate in what is arguably a publicity stunt.

I also have no intention of discrediting any of the media that “Hotline Bling” has produced. Many of the memes are clever, and entertaining, and the inventive covers have portrayed each artist’s creative interpretation of the piece; the exchange between various forms of media creates the potential for many positive, and promising artistic productions. So, meme away. Just remember it holds a bit more meaning than you may realize.