Chance The Rapper Impresses at Terminal 5 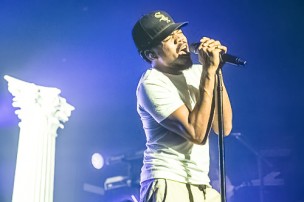 When it comes to Chancelor Bennett (aka Chance the Rapper), it’s all about family. The rapper made that very clear last Friday, when he took the stage at New York City’s Terminal 5 for a high profile stop on his Family Matters tour.

After the success of his sublime mixtape, Acid Rap, catapulted the Chicago native to superstardom in 2013, Bennett seemed poised to break out into the pop mainstream. Acid Rap showcased all the signs of an artist ready to make this jump: it was highly accessible, bursting with catchy choruses, and effortlessly cool, precisely because of its honesty and emotional vulnerability. Instead, Bennett had a revelation, as he told Rolling Stone: “I can do whatever I want. I don’t have to do a fucking thing!”

Two years later, we’re still waiting on a follow-up to Acid Rap, but that hasn’t stopped Chance from continuing to test the margins of his popularity and challenge his audience to follow along. First came Surf, his collaboration with another talented Chicagoan, Donnie Trumpet, and their band, The Social Experiment. Then, in perhaps his most hilariously bizarre move yet, Bennett released Free (Based Freestyle Mixtape), a free associative and at times purposefully inscrutable project with the rapper/motivational speaker/Based God Lil B. As Chance put it, Friday night—and the greater Family Matters Tour in general—has served as a reintroduction between himself and his fans, his band, and perhaps the same artist who created Acid Rap two years ago.

Chance’s opening acts (the rappers Towkio and D.R.A.M., Atlanta-trap producer Metro Boomin’, and future-soul quartet Hiatus Kaiyote) reflected Chance’s own eclectic taste (he apparently has a song with Stephen Colbert in the works). Notable moments included when D.R.A.M. performed his hit single “Cha Cha,” the song that inspired, or was possibly ripped off by, Drake’s “Hotline Bling.” While D.R.A.M. shared his frustrations last week via Twitter about having his song hijacked, he seemed unconcerned at Terminal 5, sauntering around the stage, and bringing the crowd to its peak with his sunny, R&B infused hit. Later, when one the of the archetypes of the Atlanta trap scene Metro Boomin’ came on, he had greater difficulty eliciting the same enthusiasm from a crowd who appeared to be far more Chance the Rapper fans then hip-hop buffs.

Finally, at 10:30 p.m., once the extensive first course of opening sets concluded, Chance dashed onstage drenched in elaborately swirling blue lights, and launched into an extensive hour and a half set. While Surf and Free were both quality releases, Chance was ever cognizant of keeping an impatient crowd at bay (only minutes earlier they had booed a particularly experimental portion of Hiatus Kaiyote’s set). He opened with a run of Acid Rap classics, including “Everybody’s Something,” “Pusha Man,” and “Good Ass Intro.” Coursing with adrenaline, Bennett briefly paused, realizing he had failed to offer the obligatory pump-ups and introductions, and went with an unassuming greeting, “Hi, my name is Chance the Rapper. I’m from Illinois, and I’m here to play some songs off my mixtape.”

While Bennett was sure to stick to message, it didn’t stop him from paying homage to and attempting to engage with those who may have been fans before the success of Acid Rap. Following the trio of Acid Rap-cuts with a rapid-fire compilation of his features on Action Bronson’s “Baby Blue,” Kehlani’s “The Way,” and BJ The Chicago Kid’s “Church,” the screens behind Chance switched up, displaying a classroom, and chalkboards with the phrase “#10Day” on them, the name of his debut mixtape. Almost self-consciously, Chance stopped halfway through his run of #10Day songs, and asked if people knew the mixtape and wanted to hear several more cuts from it. He was met with deafening cheers.

Having watched Chance The Rapper perform twice (including at Wesleyan two years ago), it’s clear that he is a performer obsessed with details. Indeed, if there exists a more elaborate or finely tuned hip-hop tour on the market, I have yet to see or hear about it. With constantly shifting graphics on the screens behind him (including beautiful stained glass windows during “Good Ass Intro”), Chance is a student from the Kanye school of souled-out maximalism, never missing an opportunity to reinterpret the emotional core of his records through other mediums.

Another ambitious goal of Chance’s live act is the full integration of his band, The Social Experiment, into his performance. While live instrumentation has become a fashionable accessory for mainstream hip-hop shows in the past few years, Chance presents The Social Experiment as an equal artistic partner. The success of his live show depends on Chance’s own charisma just as much as his band’s ability to reconfigure his unorthodox instrumentals into coherent live sketches. A visibly hoarse Chance clearly needed the band almost as much as they needed him, often deciding not to sing a song’s second or third chorus once he had effectively engaged the crowd. Instead, he relied on the climaxing horns and drum kicks of The Social Experiment, and the audience’s own knowledge of his music, to carry the back end of his set.

While noting the “different energy” of a New York crowd is a tireless cliché, it didn’t stop Chance himself from acknowledging that, while he “doesn’t usually do turn-up shows like this,” this crowd and this city required something different. Indeed, with an audience that included Jay-Z, Beyoncé, and Usher, Chance took a moment to flex some of his own industry cred, inviting veteran New York rapper Ja Rule onstage. The two did their best to rile up a young crowd who, since it is not 2005, understandably may have been asking, “Who is that?,” until Ja introduced himself and thanked Chance at the end of his mini-set.

Expecting a child soon, “Chance the Daddy,” as Bennett referred to himself at a recent concert, concluded his show on a personal note. During his cover of Kanye’s “Family Business,” the rapper noted the congenial atmosphere of his New York shows, where he sees many of his old friends who have moved to the city and new fans who he is “friends with, but we just haven’t met yet.” Intentional intimacy is a key aspect of Chance’s live shows. While Terminal 5 may be the largest standing room venue in New York, Bennett was able to conjure the familiarity of the small ballrooms he is accustomed to playing in by creating parity between himself and his audience. His stage presence is informal, conversational, and entirely human.

Almost comically aware that the crowd had been waiting all night to hear “their favorite song off of Acid Rap,” Chance concluded his set with an emphatic rendition of “Cocoa Butter Kisses.” With confetti streaming down from the ceiling, in terms of bombast, this performance pulled out all the bells and whistles. It’s a testament, then, to the purity of Chance’s artistic persona that he was able to ground the spectacle of his act in something more substantial; namely, his seemingly unforced sincerity and quiet optimism.