“Bridge of Spies” Features Spielberg, Hanks at Their Best 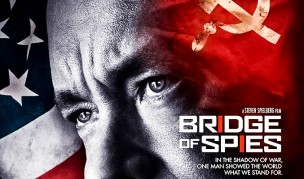 Steven Spielberg’s “Bridge of Spies” is a film one can only dream of making. Its vibrant characters, vivid cinematography, and painstaking attention to historical detail make it an immediate contender for Best Picture at the 2016 Academy Awards.

Most millennials are unaware of the historical events depicted in “Bridge of Spies,” and they are only a blip on the expansive radar of the Cold War for many baby boomers and those still left from the great generation. Nonetheless, the film’s opening and initial scenes give more than adequate historical context and cinematographic pleasure for most viewers.

As for the nuts and bolts of the history Spielberg depicts, the story revolves around three main characters who ultimately serve as pawns in the Cold War between the Americans, Soviets, and East Germans. Tom Hanks comes into the mix when his character, James B. Donovan, an insurance lawyer, is appointed by the New York State Bar Association to represent the Soviet spy Rudolf Abel, played in Scottish brogue by Mark Rylance, who is convicted of espionage by the US Government. The other two pawns in this Cold War chess game are US Pilot Francis Gary Powers and American student Frederic Pryor, who are ultimately switched out for Abel in the prisoner exchange at the climax of the film.

Hanks’ performance as James B. Donovan cements his place as the one of America’s best actors and perhaps the best of his generation. He is more than convincing as a lawyer and under-the-table diplomat. He is sincere and committed to the duty he has to his client and country. Furthermore, his role in this film along with his roles in “Saving Private Ryan,” “Captain Phillips,” “Charlie Wilson’s War,” “A League of Their Own,” and “Apollo 13” makes him one of the most prolific historical film actors of all time.

What is more compelling than Hanks’ astounding career and skill is his narrative arc in “Bridge of Spies,” which subverts the American dogma surrounding communism. It becomes a radical film by stressing duty to one’s country and the law over the fear of communism, but is simultaneously so engaging and beautiful that it doesn’t feel so extremist.

The use of light in “Bridge of Spies” is comparable to the chiaroscuro of Baroque painters like Caravaggio. In many instances, light alone directs the narrative in critical scenes. In many of the most important shots, the color palette is limited and muted, giving a sense of the gloom and the moral gray areas that came with the Cold War.

The film also effectively conveys voyeurism, especially when it comes to the plight of the newly divided Berliners. When Donovan is sent to Berlin to negotiate a nearly impossible prisoner exchange, he witnesses firsthand the chaos and horror that the dividing of Berlin entails, whether it is on the street or out the window of the only autobahn that crosses over from West to East Berlin. One of the lasting images in the film is that of young Germans climbing a fence, which is echoed later on when Hanks’ character watches American children doing the same thing in a drastically different context.

Spielberg’s treatment of the Soviet spy, Rudolph Abel, is surprising and compelling in that it shows him as a solipsistic artist rather than the cold and calculated machine that one would expect from Soviet Russian stereotypes. With a Balthus-esque painting style, we get quick and occasionally lingering looks at Abel’s artwork. The film actually starts in his humble studio in Brooklyn, where a collection of canvases and paints hardly lead us to believe that we are in fact in the safe-house of a Soviet spy. His stoic approach to situations that would make most in his position panic lead Donavan to repeatedly ask him if he’s worried throughout the film, to which Abel always responds, “Would it help?”

Of all of the historical films in the American canon, “Bridge of Spies” may be the best. Even if it’s not, it deserves to be watched, for the Cold War xenophobia exhibited and wrestled with in this film exists today in other forms. We can and must learn from this film. Without works of art that reconstruct the past like this does, we lose a critical part of the fabric of our nation. Spielberg has given America some of his best work, as well as something from which we can learn.