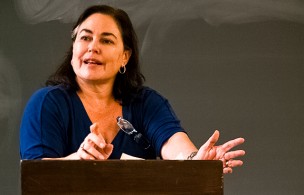 Once a month, on a Thursday afternoon in the Shapiro Creative Writing Center, a small group of students, faculty, staff, and the occasional parent or Middletown resident gather together over cheese and sparkling cider and discuss the writing process. This is Table Talk, put together and led by Amy Bloom, Wesleyan’s current writer-in-residence who started Table Talk the year she began working there.

“A friend of mine had been talking about a Sufi tradition in [hir] community in which people come and bring their concerns,” Bloom said. “And I thought, ‘I would like to do that for the writing community at Wesleyan. I would like to create a space where you can come bring your work, you can ask a question…’ I wanted it to be for students, for staff, for faculty, for anybody who wanted to come.”

She intended for the space to be a place where students, who might have difficulty contacting their writing professors outside of class or office hours, could come and get an essay critiqued, or dissect a complicated reading assignment with other students and faculty.

But as long as it’s about reading and writing, anything goes. Bloom acts as a moderator, starting each discussion with “What’s everyone working on right now?” and letting whoever has a question they want to address have the floor. And while Bloom doesn’t shy away from offering up her own advice on the writing process, other Table Talk attendees are encouraged to add to the conversation and give suggestions to whomever is in need of help on an assignment. The topics range from songwriting techniques to film theses to writing-related internships over the summer.

Occasionally, they can turn much stranger than that. Bloom recalls one Table Talk where a woman from Hartford visited and asked for advice on writing her memoir.

“[In the memoir] her difficulty in achieving orgasm featured heavily,” Bloom said. “I think that that required all of us to step up our game a little bit, as listeners and as critics. But once people got over their extreme awkwardness and squirminess, I was actually able to talk to her, as part of the group, about how you make something accessible to your reader. Is the point to make people uncomfortable, or is the point to make people comfortable? And the sentence you write does that. It’s not magic. It’s craft.”

And the group setting, she thinks, helped in demonstrating that point.

“When you have a topic that’s really tough for people to sit around in a group and talk about, it also makes it really clear how big a difference the storytelling makes, the sentence makes,” she said. “We don’t really care what color the guy’s shirt was… but we do care about what the lady who you were talking to was like. If nothing else, it was dynamically interesting.”

The accessibility factor often plays a big role in the Table Talk discussions, especially when students come in with more experimental works for class.

“I remember last year, a girl came in with these ‘puzzle poems,’” Bloom said. “The room was divided between people who knew what the student was trying to achieve with the project, and could therefore give helpful critiques on its details, and others who were completely lost as to why she was creating something that was purposely ‘not accessible.’ I think Table Talk gives people a chance to talk, in ways that are both concrete and abstract, about their own stance on writing, on storytelling, on communicating with the reader, on whether or not one writes to be read.… People come in with all different perspectives.”

In addition to hosting Table Talk, Amy Bloom teaches several creative writing classes at Wesleyan, namely a Writing for Television workshop and a Children’s Books course. She said that while her students tend to be forthcoming when it comes to questions or concerns in her classes, Table Talk has helped her learn about other professors’ techniques and what students like or don’t like.

“[They’ll talk] about something really great that happened in a writing workshop that was different from how I might’ve approached it or something terrible that happened,” Bloom said. “So I always feel like I learn stuff—different techniques, or how something that seems very well intentioned goes awry.”