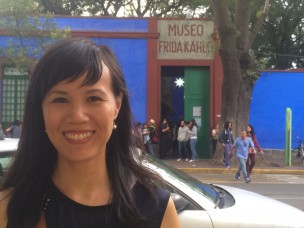 Fresh from a year-long sabbatical, Assistant Professor of English Marguerite Nguyen returned to campus this fall and has been busy finishing up work on a book about understanding American literary history through the lens of Asian American texts while teaching two courses. She sat down with The Argus to discuss her specialization in Asian American literature, approaching trauma with humor, and the intertwining of literature and history.

The Argus: What are you reading right now?

Marguerite Nguyen: I’m not reading much for leisure; I’m mainly rereading things for research. I’m reading a lot of theory, theoretical scholarship, on cross-cultural drag and racial drag. [Specifically, I’m] reading about this American fiction writer, nonfiction writer, playwright, and Hollywood screenwriter Harry Hervey, and he’s really interesting because he produced all of these works about Vietnam in the early 20th century.

Nobody knows about him, [even though] one of his plays was performed on Broadway, “Con Gái,” which just means “girl” in Vietnamese. It ran on Broadway and it was very popular. As a gay Southerner, somehow he sees himself as resonating with the experience of colonized Vietnamese subjects in the 20th century, and so I see him as engaging in this interesting, weird performance of colonized Vietnamese women’s subjectivity as a way to comment on certain social issues. He was outspoken about Southern homophobia [and] he at some point in his life considered himself to be a communist or socialist, so there was something about inhabiting the persona of a Vietnamese woman that he thought would allow him to comment on these social issues of the day. It was very strange.

A: When you do read for pleasure, what types of literature do you read?

MN: I’m always trying to catch up on Asian American literature, and graphic narratives, which are becoming increasingly popular. I’m really interested in certain writers who are writing about race and gender in America. There’s a writer named Paul Beatty, an African-American writer who uses humor as a way into racial issues, which I think is an interesting thing, when writers use humor to [question] where we are, racially, in the U.S., because sometimes things are so sad and… there are a lot of intense emotions and trauma in speaking of those issues. I’m interested also in global literature and writers who are interested in similar issues that I’m interested in but through different geographical or historical contexts.

A: Tell me about the sabbatical you took last year.

So, one thing that I did [during my sabbatical] was I went to the National Archives in Washington D.C. and looked at all these really old ship log books. I was trying to understand these American sailors and merchants who were sailing to Asia in the early 19th century and… how their writings about these parts of the world shaped the American literary imagination. More specifically, I’m interested in Southeast Asia and how we think of it primarily in the terms of the Vietnam War. In my view, this obscures how transnational America really was from its earliest days. You can see this if you focus on genres like sea narratives and travel narratives, it actually shows how global America’s history was, particularly with regard to Southeast Asia. It has always been in the American cultural imagination but… the dominance of the Vietnam War has sort of overshadowed this complex, dynamic history.

A: What will you work on after your current book?

MN: My second book project will focus on Asian American contexts in New Orleans as another way to rethink American literary history. I’m trying to [spend some time] in New Orleans next summer.

A: How did you end up at Wesleyan?

MN: This is my fifth year, and I ended up here because it seemed like a great environment to teach in. We’re actually really fortunate in that, in the English department, we have two Asian American literary studies professors, Amy Tang and myself. That has been important because it makes me feel like there is somewhat of a community to work within. [Professor Tang and I] have served on a panel together at a conference and we talk a lot about teaching courses at Wesleyan; we switch off teaching the course Introduction to Asian American Literature. We overlap a lot but we also have distinct areas of interest. She focuses on contemporary, post-modern Asian American literature and I have a slightly more historical focus. I think we complement each other in many ways.

A: Do you see yourself as strictly a literature professor or is there some history mixed in there as well?

MN: There is definitely a lot of history in what I teach, and I think that’s why a lot of my projects are interested in literary history, or literature through a historical lens, and [are] also focused on the fact that history is literature, too. I think that’s a challenge of teaching Asian American literature when you do feel like you have to provide some historical background, because for a lot of students it’s new material and the historical context helps.

A: What’s your favorite book or author?

MN: I really like an author named Monique Truong, who wrote a book called “The Book of Salt.” She was reading “The Alice B. Toklas Cookbook,” and she saw this chapter about these Vietnamese cooks who worked for [Toklas] and Gertrude Stein in Paris in the 1920’s and 1930’s and [Truong] asks, “Why don’t we know about this?” She creates this whole novel about what it might have been like for a Vietnamese cook to be in Stein and Toklas’s house while Hemingway and all these people were coming through this famous salon in Paris. I maybe don’t have a favorite writer, but I’m interested in how different writers are invested in certain literary issues.