Observatory Builds a Ramp to the Cosmos

The University hopes to ramp up the Observatory to be in compliance with ADA standards. 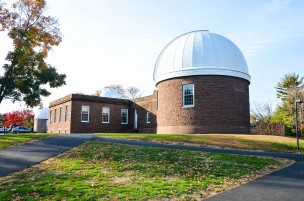 On a Friday night in October, Jesse Shanahan, a graduate student in the Astronomy Department, stood behind an inflatable planetarium. The silver, blown-up stellar theatre, they explained (Shanahan uses gender-neutral pronouns), was part of Kids’ Night, a public outreach program aimed at children. Later, kids would go inside to view projections of the stars and constellations in the night sky.

Shanahan founded Kids’ Night earlier this year. When we spoke, though, they expressed a major concern: the location. Shanahan advocates for disability rights within the American Astronomical Society (AAS), the largest astronomical organization within the United States. As with other events the Astronomy Department hosts, Kids’ Night is housed in the Van Vleck Observatory, a building that has no wheelchair-accessible entrances.

“I worked primarily with kids with disabilities and cognitive impairments and stuff [with an outside organization], especially, and they would not be able to come to an event that I put on here,” Shanahan said. “That really bothers me.”

Currently, the Astronomy Department—working with Physical Plant and the Office of Student Affairs, of which Disability Resources is a part—is in the process of addressing Shanahan’s concerns. Physical Plant is currently working with an outside architect to draw up plans to build a ramp in the architectural style of the 99-year-old building, making the observatory wheelchair-accessible on the first floor.

According to Roy Kilgard, Support Astronomer and Research Associate Professor of Astronomy, initial plans to address accessibility issues at Van Vleck Observatory included the possibility of making the 20-inch telescope dome wheelchair accessible, but were abandoned due to logistical concerns.

“There’s a lot of challenges involved in [making the dome wheelchair-accessible]; it’s unclear that it ever would’ve worked for any sum of money and it would’ve been a massive renovation to the building,” Kilgard said. “So that was ruled out.”

Kilgard said he came up with the idea of the camera as a more affordable and feasible solution to the problem of making the dome accessible. The camera and monitor, he later wrote in an email to The Argus, will be installed by the beginning of spring semester.

Efforts to make the Van Vleck Observatory more accessible, administrative officials said, are part of a larger plan for the University to address concerns regarding accessibility on campus and meeting the requirements of the Americans with Disabilities Act (ADA), a 1990 law that requires that people with disabilities are offered reasonable accommodations from employers. As with the rest of the University, they said, the age of the observatory and the hilly terrain surrounding it make these concerns especially hard to address.

“There’s a constant conversation on campus around accessibility,” Laura Patey, Associate Dean of Student Academic Resources, said. “I mean, we recognize that [with] topography and the age of some of our buildings, accessibility is a challenge on this campus. And we’re always wanting to improve that.”

According to a document provided by Roseann Sillasen, Associate Director and Project Manager of Facilities, the University has spent through Physical Plant $2.23 million since 2003 on campus-wide accessibility projects. Those initiatives range from making pathways more accessible to building restrooms designed for wheelchair users to putting ADA-compliant phones, which are required to be hearing-aid compatible, into elevators.

The University has limited funds set aside for ADA-related projects; The Facilities Planning Committee—an executive committee of the University—sets priorities about which parts of campus are first renovated for accessibility concerns, Sillasen said. According to University President Michael Roth, a large factor in setting these priorities lies in how much activity different buildings experience.

“Those buildings that have either the most public or student activity we want to make sure are the most accessible first, and then we hope that every building meets ADA requirements and goes beyond them when we can,” Roth said.

Until this summer, the Van Vleck Observatory had not received money from the University to address accessibility concerns. The reason for this, Sillasen suggested, is because Physical Plant makes assessments about which ADA-related projects it does based on student and faculty feedback—and, until somewhat recently, it had received none.

“No student has asked me about Van Vleck,” Sillasen said. “So I have had a request from the chair of the department. And at that time, I had provided some very broad scope schematics looking at topography and now we have an architect who’s providing some schematic designs from us.”

Sillasen said that the University uses feedback from people in the Wesleyan community, in large part, as a way of identifying which parts of campus have issues with accessibility.

In order to address what some of these concerns are, Disability Resources added an ADA/Campus Access Barriers Report Form, through which students, faculty, staff, and visitors can report accessibility concerns, Patey said.

“This would provide an opportunity for anyone in the community to help us identify barriers that might exist for an individual,” Patey said.

But at places like the Van Vleck Observatory, where faculty and administrative officials have long known about lack of access for wheelchair users and other people with disabilities, waiting for students or faculty to issue complaints concerns Shanahan.

“I think a lot of people have good intentions to change things,” Shanahan said. “But I hate that we have to wait for somebody to be in need before we make changes.”

Even with an understanding of areas on campus where accessibility issues need to be addressed, renovations to make buildings accessible take time to implement. In an email sent to The Argus, Patey pointed to several other academic buildings on campus that are not accessible, including the Anthropology building on 287 High Street and buildings in the Center for the Arts.

Physical Plant, Kilgard said, has been looking at adding a ramp to the Van Vleck Observatory for a number of years.

“They’ve just been putting it into the long-term planning for construction that happens to the University,” Kilgard said. “Those things take a very long time to filter through. It’s not as fast as you would like it to be.”

And the process is far from over. This June, the Astronomy Department will be hosting a centennial celebration in honor of the hundredth anniversary of the Van Vleck Observatory. Although faculty within the Astronomy Department had hoped to see a ramp installed by then—along with other features, like the building of an accessible restroom and doorways and entryways designed for wheelchairs—such changes are unlikely to occur by then.

“It’s going to take years, is my guess,” Moran said.

On the day of the centennial, Kilgard said, Physical Plant will install a temporary ramp to the Van Vleck Observatory. In part, this is intended to allow visitors access to the building. It will also be installed, Shanahan said, because the J. Monroe Van Vleck Professor of Astronomy, Emeritus, Arthur Upgren, plans to visit the Observatory and is a wheelchair user.

“He can’t get into his own department, where he worked here for decades,” Shanahan said. “And so, we have our centennial celebration next semester and he can’t get into the building.”

Because of the ramp, Upgren should be able to view the inside of the building. Still, faculty in the Astronomy Department wait to see a more permanent fixture installed—one that would allow Shanahan’s students to visit Kids’ Night on any Friday night they choose.