Stephen Falk's "You're the Worst" embraces the messiness of modern relationships. 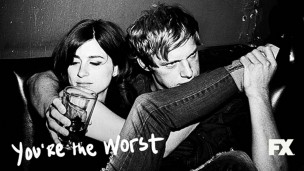 Written by Stephen Falk, FXX’s “You’re the Worst,” currently midway through its second season, might reductively be described as an anti-romantic comedy. Poaching the rhythms of sitcoms such as “The Mindy Show” and “New Girl,” which increasingly center themselves around extended relationships between leads, Falk’s show focuses on the budding romance of the elitist, misanthropic novelist Jimmy (Chris Geere), an arrogant alcoholic of a novelist, and the crude, equally misanthropic Gretchen (the wonderful Aya Cash), a devil-may-care alcoholic of a publicist. As “You’re the Worst” traces the relationship from their first hookup after the wedding of Jimmy’s ex girlfriend and Gretchen’s sort-of friend to the decision to become exclusive, to the moment when the pair decide to move in together, both characters reveal themselves to be cruel, petty, and reckless. The resultant comedy is perhaps the funniest sitcom in years, and one of the first that refuses to excuse its leads’ myriad flaws.

On the surface, “You’re the Worst” is the sort of program that might appear absolutely wretched. Its characters are selfish and destructive; it operates within a model that has all but burned itself out; and it seems designed solely as an incubator for the sort of edgy humor that prizes shock over subversion. In reality, both Jimmy and Gretchen would probably be dreadful to spend time with. Rather than attempt to mask this under a polished facade of overwritten banter, however, Falk’s creation has the guts to fully embrace the awfulness of his leads while simultaneously confronting their insecurities in a way that yields both humor and poignancy. The miracle of Falk’s work is that, unlike a work like Amy Schumer’s “Trainwreck,” which can’t decide whether it wants to excuse or remake its central character into something more palatable, “You’re the Worst” opts to do neither. It acknowledges both the repulsiveness and the comedy of Gretchen and Jimmy’s behavior. Concurrently, though, it proposes that these qualities do not exclude the possibility of genuine emotional depth. Falk does not ask his audience to love his characters in spite of or because of their flaws. Instead, he simply presents viewers with two deeply troubled people, and allows them to observe how those people gradually reveal their potential for empathy and nuance in unique and personal ways.

It doesn’t hurt that “You’re the Worst” surrounds its protagonists with an equally nuanced supporting cast, one which the show allows to exist beyond the orbit of the two leads. Jimmy’s roommate Edgar (Desmin Borges), a PTSD-afflicted Iraq war vet whom the novelist both supports and exploits, offers traditional relationship wisdom while also struggling with his own wounds. Gretchen, on the other hand, spends much of her time with the strident Lindsey (Kether Donohue), Jimmy’s ex-girlfriend’s sister, whose increasing dissatisfaction with her loving but milquetoast husband leads her to encourage her friend’s more rambunctious tendencies. Both Borges and Donohue are fantastic, given the chance to inhabit fully-formed characters as opposed to the Greek chorus that normally makes up the supporting cast of the romantic comedy. Certainly, they influence Jimmy and Gretchen’s relationship, but they are also infused with individual passion and sadness. Edgar’s anxious energy paints him as both a clown and a victim of a world that has refused him any sort of sustainable comfort, whereas Lindsey’s increasingly explicit obsession with her friend’s romance helps outline a woman who is proud of her sexuality but unsure of how to harness it within the strictures of her relationship. That both of them are wickedly funny (“Navy villains are just one step above pirates,” Edgar scoffs at an episode of “NCIS”) is only further proof of Falk’s commitment to each character. Even as “You’re the Worst” structures itself around Gretchen and Jimmy’s complicating feelings for each other, it refuses to block out the rest of the world in order to do so.

Were “You’re the Worst” too pleased with its own subversive energy, it would surely fail. While Falk’s show is indeed a deconstruction of the traditional romantic sitcom, it also owes a great deal to other such programs.  More so than the jadedness of its central characters, “You’re the Worst” is about the shifting boundaries of relationships and the evolution of how people connect. It’s also a show that celebrates these new forms of intimacy shamelessly. Hell, the series premiere all but opens with a nearly three minute sex scene comprised of maybe five or six unique positions and mutual oral sex. This isn’t a program decrying the cheapening of sex or the distancing effect of technology. It’s neither moralist nor luddite. Rather, it’s a show invested in showing how these forces shape the ways in which legitimate emotions manifest themselves. Even as the first season builds toward the couple’s moving in together, it continues to validate the specific and non-traditional aspects of Jimmy and Gretchen’s relationship. And, if we’re being technical, the move-in is more a result of the high-powered-vibrator-in-a-faulty-socket electrical fire that claims Gretchen’s apartment than any societal norms.

More so than perhaps any program of its ilk, “You’re the Worst” enumerates the stark difference between growth and maturity, and the difficult ways in which the two interact. Are Gretchen and Jimmy nice? No. Do they frequently engage in selfish and self-destructive behaviors? Absolutely. Do they always learn from their mistakes? Most definitely not. But by the time the first season of Falk’s show ended, it was impossible argue that neither of these characters had grown, even if they still retain many of the qualities that make them unpalatable. Furthermore, as opposed to the now-almost-parodic anti-hero archetype, Falk’s show does not rely on those darker, more damaging qualities to create depth. That these characters are troubled and troubling is a given, not a hook. What’s interesting to “You’re the Worst” is the ways in which characters respond to and evolve within their own flaws, rather than the simple fact that those flaws exist. The resultant show is funnier and more human by abandoning the frustrating compulsion of plot that suggests that a character’s arc must bend towards the shedding of what makes them unique or imperfect. In fact, Falk’s creation ends up being all the more romantic, affecting, and affirming for it. Who says love is dead?