Ryan Murphy’s Scream Queens attempts satire with all the grace of Jason Voorhees. 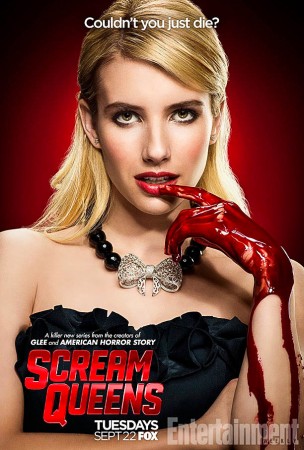 “Scream Queens,” which premiered in late September on Fox, is the latest from “Glee” creators Ryan Murphy, Brad Falchuk, and Ian Brennan (the former two are also the co-creators and showrunners of FX’s “American Horror Story”). Set in the Kappa Kappa Tau (KKT) sorority of the fictional Wallace University, the trio’s latest is a semi-send-up of slasher films, a fifteen hour entry into the genre that plays like an assemblage of mediocre college improv bits, oozing the sort of cheap provocation and blunt moralizing that has become the signature of its creators.

Emma Roberts stars as Chanel #1, president of KKT and the embodiment of a brand of upper class white privilege that the show purports to mock. Worshipped by a set of sisters whose names she can’t even bother to learn (instead calling them Chanel #2 through Chanel #5, in what seems like a bid by the show to pinch the vital satire of “Heathers”), Roberts’ character is a crudely drawn parody of the women the show creators think ubiquitous in sororities. Cue an onslaught of jokes about eating disorders under the guise of body positivity.

Unfortunately for the Chanels, the university’s new Dean of Students Cathy Munsch (Jamie Lee Curtis, doing her very best to have fun) hates sororities and will do anything to bring down KKT, including forcing the sisterhood to admit all applicants or, as Ryan Murphy’s script so delightfully puts it, “fatties and ethnics” (this Chanel-delivered remark leads into an extended bit about the dangerous combination of large appetites and foreign spices, which feels like something poached from a scrapped “MADTV” sketch). What’s also unfortunate for Chanel (and the rest of the campus), is that there’s a killer on the loose, dressed as the school’s Red Devil mascot, who may just have ties to a mysterious pregnancy and death that occurred in KKT two decades prior.

The major problem with “Scream Queens” is that, while billed as a horror comedy (a genre which Ryan Murphy actually claimed he invented while doing press for the show), it rarely works as either. There are moments of absurd humor that land, but they often feel completely divorced from the remainder of the show, which proceeds in such a slapdash manner in all directions that it’s hard to really get any sense of what’s going on in a given episode. Sure, the sight of a student dressed as a giant ice cream cone being butchered to Wham!’s “I’m Your Man” is worth a few giggles, but it’s not a joke that lingers long after the episode is finished. Furthermore, the vast majority of Murphy’s humor is so mean-spirited that it’s hard to actually get a sense of where the show’s sense of humor actually lies. By peppering the Chanels’ dialogue with classism and racism, “Scream Queens” is trying to have its cake and eat it too. Murphy would probably argue that the point of these jokes is to shed light on the prejudicial nastiness that comes with certain institutions, but then, why are they all structured like zingers? Each little bit of cruelty that decorates the script is so self-consciously clever that it directs audience attention not at the grossness of the comment, but on its grossly artful construction.

It’s further unclear whether Murphy, Falchuk, and Brennan have any desire to make their show scary, which, in three episodes (one of them the length of the average slasher picture), it has yet to be. It’s not uncommon for horror parodies to find themselves lacking in tangible scares, but “Scream Queens” seems so unsure of what it has to say about the slasher genre that it doesn’t even have the muscle to make up for the mood. Sure, at one point Roberts makes a comment about how a killer treating students like pigs for the slaughter is akin to the damaging entitlement of the male gaze, but if “Scream Queens” is looking to tackle the tricky gender politics of its parent genre, it’s doing so with all the nuance (and none of the tacky verve) of 1982’s “Slumber Party Massacre.”

Perhaps the central problem is the inherent lack of sustainability of a fifteen-hour slasher picture, when many films in the genre can barely hold their own for ninety minutes. At their best, slasher pictures are lean and punchy, an accumulation of basic tension and bloody spectacle. Despite the fact that “Scream Queens” has already run for nearly twice as long as most entries of its ilk, it’s provided the audience with little extra character development, instead opting for the basic rhythms of a film half its current length. Add to this the fact that the show has yet to have much fun with its violence (the saving grace of all splatter mediocrity), and you’re left with something both bloated and malnourished, like a half-inflated balloon pumped full of the runoff from films like “The House on Sorority Row.”

That it’s taken this long to even mention the series’ “protagonist” is perhaps the best demonstration of “Scream Queens’” ultimate failure. Grace Gardner (Skyler Samuels), one of those admitted to KKT as part of its new open door policy, is marked by the show as its final girl, but there’s little reason to root for her. In order to make her appear decent in comparison to the Chanel regime, Murphy and company have opted to make her flavorless, turning her into an exposition machine in the face of an army of quip-factories. When the majority of an ensemble says nothing of substance, there has to be at least one to trot out the boring stuff, right?

Episode after episode Grace is swallowed up into the background, off investigating the mystery of the killer while others are either slaughtered or pulled off into exhausting side bits, like Roberts’ boyfriend’s potential necrophilia and insistence on the primacy of “ghetto code.” Much like “American Horror Story,” “Scream Queens” often plays more like a conveyor belt of moments instead of an evolving story. Some of these moments are indeed funny, but their sum is inevitably far lesser than the parts. Those bits that do land always seem to do so at the expense of the show’s narrative momentum and ultimate cohesion. They fail to build upon or establish a consistent tone or context and leave the viewer unmoored as a result.

In the end “Scream Queens” speaks more about its creators than it does about horror, gender roles, or the dangers of privilege. As an uncanny love child of “American Horror Story” and “Glee,” “Scream Queens” absorbs the flaws of its predecessors without ever growing past them. It’s very possible that Murphy, Falchuk, and Brennan’s emphasis on the trees over the forest will appeal to some and propel the show to considerable success. Much like “American Horror Story,” “Scream Queens” is an anthology series, even if it feels more like it’s the episodes, not the seasons, designed to be intentionally disconnected. If it does find a dedicated audience, “Scream Queens” will be one more argument for Murphy’s brand of style over substance, which is a real shame and provocation above all else. For all Murphy’s insistence that he deals in camp, the slasher genre would seem like the perfect place for him to really plant his feet. In the end, though, “Scream Queens” seems to have as little respect for or interest in its genre as it does in its viewers, which is to say, none at all.