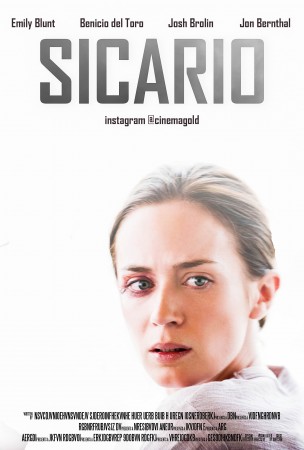 “Sicario,” directed by Denis Villeneuve, may be the best thriller of the year. It’s athletic, bleak, and brutal, trading simultaneously in gut-wrenching suspense, explosive violence, and a keen awareness of its context, both as a film and an examination of an ongoing conflict. Its title, the film explains at the outset, refers to a sect of religious zealots in Jerusalem who did all in their power to expel Roman forces. In Mexico, it means “hitman.” From the very beginning Villeneuve’s picture is, thus, haunted by two intertwining strains of bloodshed: the emotional and unrestrained, and the strategic and detached. Whether these are two unique creatures or simply two parts of one chimeric drive stalks the film and its characters at every turn.

“Sicario” stars Emily Blunt as FBI SWAT agent Kate Macer. Though she will find her values and conceptions of justice put to the test over and over, she is no new recruit. Macer is not Clarice Starling. She is not blind or dumb to cruelty. As a member of a special kidnapping task force, Blunt’s character has been kicking in doors “since day one.”

It is behind one of those doors that the movie begins, with an FBI raid aimed at recovering a number of hostages from a sparsely furnished house in Arizona. Upon bursting in, the agents find no hostages. Instead, they discover nearly three dozen bound and beaten corpses lurking behind the thin drywall, lined neatly, one next to the other, in what appears to be a cartel update of “The Cask of Amontillado.”

Though the FBI is certain that the house is owned by a high ranking cartel member living in the United States, they find themselves unable to tie him to the building’s gory insulation. Instead, Macer is assigned to work as a liaison to a highly secretive unit designed to prevent incursion from the cartels, and headed Department of Defense adviser Matt Graver (Josh Brolin). Through this unit she is introduced to Alejandro Gillick (Benicio del Toro), Graver’s partner and a former prosecutor from Juarez, Mexico.

Quickly, Macer realizes that she is deeply uncomfortable with Graver and Gillick’s methods, which is only compounded by their consistent unwillingness to provide her with much meaningful information on the strategic end goal of their operation. As they cross into Mexico with impunity, snatching a cartel member and dragging him back over the border, Macer becomes increasingly suspicious of Gillick and his past.

Each of the performances in “Sicario” is a wonder to behold, though none more so than del Toro’s. The actor glides in the periphery of the film’s action before inserting himself with ruthless efficiency, never disturbed by the wanton carnage the unit encounters. Rather than over-emphasize his character’s mystery, del Toro allows energy to accrue through pauses, glances, and calculated movements, constantly teasing Macer and the audience with the suggestion that he is simply unknowable. He’s a grim reaper of sorts, who refuses to announce what his exact stake in the business of the cartels truly is, whether it means nothing or everything to him.

Blunt is equally mesmerizing, building a character who is both strong and vulnerable. As Macer tries to make sense of the circumstances in which she’s found herself complicit, Blunt brilliantly telegraphs the escalating confusion and rage that begin to cloud her mind. “Sicario” presents itself as a sort of moral sojourn, a prolonged trek through a post-apocalyptic ethical landscape that demands copious sacrifice to be made hospitable. As Blunt makes her way through the various challenges with which the film presents her, Villeneuve never paints her as naive or unfit. Rather, the film suggests, she has been deposited into a world of which no sense can really be made without the intervention of measured savagery.

That “Sicario” structures itself atop these two central performances is ultimately what allows it to succeed so thoroughly. Though strung through with a series of raw and gripping set pieces, the film is ultimately a succession of escalating emotional beats. None of the action; which is consistently brusque, merciless, and gracefully shot; exists outside of the picture’s emotional membrane, and the most dazzling examples of Villeneuve’s skill as an action director read more like mythological trials than traditional scenes of combat. Without ever becoming overly reliant on the moral questions at the center of his film, Villeneuve suggests each outburst of chaos as a catalyst for or a reaction to the decisions of his characters. They are emotional turmoil writ in the crackle of gunfire and the splatter of blood.

In perhaps the film’s most arresting sequence, a heavily armed cohort of soldiers infiltrate a tunnel used by cartel mules to transport narcotics over the border. Shot through the splicing of night vision, heat vision, and aerial photography, the scene plays like a combination of “Zero Dark Thirty”’s climatic Abbottabad raid, and “Silence of the Lambs’” final confrontation. Cast in the black and gray palette of their thermal goggles, the soldiers look like specters, edging along against the jagged stone walls of the passage. Backed by a slow groaning score, the mission almost reads like something from a slasher film as the camera glances down at the bodies left strewn across the tunnel floor.

In many ways, “Sicario” is a horror movie. Far more so than Villenueve’s last film, “Prisoners,” “Sicario” manages to be as unrelenting as it needs to be without feeling oppressive.  With “Sicario,” Villeneuve manages to craft a film that is both thrilling and poignant. Casting the majority of his shots in a sickly yellow, Villeneuve’s world has the pallor of something rotting, swollen, and sick. Moments when the lens trains on the desolate borderlands revel in the jarring flatness of the terrain, and the faded impression of the mountains looming in the distance. Like the sea in “Jaws,” the desert in “Sicario” groans. That combination of emptiness and claustrophobia charges most every shot in the film, whether of well-furnished conference rooms, opulent villas, or highways-turned-killing-fields.

In the end, “Sicario” reveals itself to be, at its core, a tour of loss and the search for closure. Whether through the rule of law or the grit of brute force, every character finds him or herself yearning for some way to make order from chaos. Most impressively, “Sicario” presents a slate of characters who have very few illusions about their wants, very little confusion as to the cost of their actions. These are not men and women duped into selling their souls by great misconceptions of justice and fairness. These are men and women who have little left to give, and nothing to lose on the sale.