Trevor Noah Makes “The Daily Show” His Own 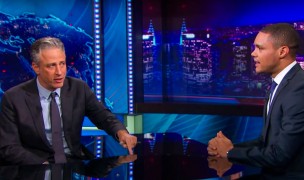 Trevor Noah’s oratory is smooth and refreshing in a media market saturated with anchors muddling their T’s with American accents (with the notable exception of John Oliver). The premiere of “The Daily Show” post-Jon Stewart was funny and entertaining, as well as gilded with new fonts and set layouts that carefully eased viewers into a new era that features a relatively inexperienced and unknown South African comedian at the helm of what was the best satirical program in politics. It remains to be seen whether Noah can fill the shoes of his predecessor, or whether he will shake them off and run with feet as bare as his sense of humor.

As much as there is to discuss concerning Noah’s unearthed past of offensive jokes, “The Daily Show” will provide him with an opportunity to establish himself as a force in American politics with the help of Jon Stewart’s coattails. In fact, the controversy surrounding Trevor Noah’s entrance into “The Daily Show” further legitimizes his role as General in “The Daily Show’s” “War on Bullshit,” the term coined by Stewart at the end of his tenure where he made the case for the purity and necessity of comedy in political life. Now that the baton has been passed to Noah, the heavy task of satirizing our polarized politics comes with challenges far greater than politically correct think pieces on Noah’s past standup and Twitter feed.

One of the surprising revelations of Noah’s first show as anchor of “The Daily Show” was his acknowledgement that he was not Comedy Central’s first choice. He addressed the elephant in the room, crystallizing his legitimacy as Stewart’s successor, by telling the audience that the role was offered to a woman and another American before him. The following sound bite circulated on many news shows the next day: “The truth is now I’m in the chair and I can only assume that this is as weird for you as it is for me. You know, Jon Stewart was more than just a late night host. He was often our voice, our refuge, and in many ways our political dad. And it’s weird. Because dad has left, and now it feels like the family has a new step dad, and he’s black.” The audience’s laughter at this joke was one of the high points of the show; it highlighted Noah’s self-awareness.

This self-awareness came to the fore in Noah’s spin on the classic “It’s truly an honor to be here” portion of every premiere. Making Colbert’s version of this obligatory act look generic, a nearly impossible feat in the presence of Colbert in or out of character, Noah brought privilege to the fore in his cutting “honored to be here” bit. Shortly after his opening, Noah joked, “This is surreal for me. Growing up in the dusty streets of South Africa, I never dreamed that I would one day have—well, two things, really. An indoor toilet, and a job as host of ‘The Daily Show.’ And now I have both. And I’m quite comfortable with one of them.” As easy as it is to dismiss this as literal potty humor, Noah’s acknowledgment of the privilege he now holds as host of “The Daily Show” compared to that of where he came from is far more nuanced than critics like The New Yorker’s Sarah Larson are willing to admit.

Many devoted followers of the show have been left in a state of “apprehension, at best” since the series of media catastrophes that surrounded both Noah’s stand up and his relatively recent tweets following the announcement of Stewart’s departure, according to Larson. Whether or not Noah has alleviated the unease of “Daily Show” viewers remains to be seen and has been debated vigorously by critics since the teaser for the show was released. However, Noah has the potential to become an even better host than Stewart if he exhibits more of the biting social commentary that was lacking in his first appearance as a correspondent on the show.

When Noah first appeared on “The Daily Show” amid the rise of the Black Lives Matter Movement, he exhibited a sharp social commentary that should be featured more now that he is in the seat Stewart once sat. After Stewart introduced Trevor Noah and remarked that he flew to the United States from South Africa the day before, Noah quipped that, “I just flew in and boy are my arms tired.” Playing along, Stewart led the audience to believe that Noah had opened with a terribly unambitious joke. Then Jon Stewart passed the torch to Trevor Noah, most likely unknowingly. Noah raised his arms in “hands up don’t shoot” fashion and said, “No, no, no, seriously I’ve been holding my arms like this since I got here. Yeah, I never thought I would be more afraid of police in America than in South Africa. It kind of makes me nostalgic for the old days back home,” adding, “Since apartheid ended, [black people] are now also being killed by black police. Progress.” One can only hope that Trevor Noah can bring this sobering social commentary to our collective consciousness.