The Chapel proved to be the perfect space for Waxahatchee's lush and soothing sound. 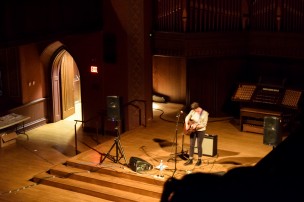 Decked with rows of candles and the faint glow of dimmed lights, the Memorial Chapel appeared ready to host a spiritual service of sorts last Friday. For many, that’s exactly what it was when Waxahatchee front-woman Katie Crutchfield played an intimately stripped-down set for 500 fans. Performing without the backing members of her band, Crutchfield engaged the audience as a singular force on stage, taking a sound already marked by simplicity, and bringing it to the next level of bare-bones minimalism.

Waxahatchee, an indie project rooted out of Birmingham, Al., is most known for its personal and powerful lyricism coupled with unadorned, stripped-down instrumentals, a trend characteristic of earlier alternative bands like The xx, that has permeated the contemporary indie scene.

Now based out of Brooklyn, Crutchfield has distinguished herself as one of the leaders in her genre, by blending ’90s indie rock influences and polished songwriting, bolstering a voice that has the rare ability to both lull and invigorate. It’s a skill that Crutchfield certainly has full command over, throughout her three recent albums and in a live show as well.

After a well-received opening act by a Wesleyan alumnus, Henry Hall (of Grand Cousin), Crutchfield took the stage with calm collectedness. The high ceilings and her unaccompanied performance made her appear vulnerable. She sported a casual striped top and jeans, much like many students who filled the pews.

“Hi, I’m Katie,” she said softly. “This is called Waxahatchee.”

The entire show continued on this same track of intimacy between audience and stage. As Crutchfield kicked off the set with “Catfish,” the room grew immediately silent. The audience wanted to hear what she had to say. The following 13 songs were a sort of conversation: one where Crutchfield crooned a series of poignant lullabies that ranged from willowy to fully impassioned. The audience responded by holding their exhales when Crutchfield’s voice crept into the higher registers; they let everything go when the imagery within her lyrics was especially resonant.

In “Bathtub” she conveyed feelings of self-deprecation and blame amidst dissatisfaction and loss. “And I lament, you’re innocent,/but somehow the object of my discontent./And it’s fucked up. I let you in/even though I’ve seen what can happen.”

Even when Crutchfield sang about experiences riddled with darker images and personal vulnerabilities, she did so with a sort of polished clarity that is characteristic of her latest album, Ivy Tripp, which was released in April. A marked development from her debut LP, American Weekend, Crutchfield has since shown a departure from her 2012 lo-fi solo release, maturing as a lyricist and songwriter. Her solo show was demonstrative of that and her independence as a performer.

The decision to have the show in the Chapel was the main area of contention that surrounded Waxahatchee’s show. It was certainly a choice made within reason, as the location fostered an experience that felt both intimate and focused. However, the venue’s shortcomings may have in the end outweighed its benefits. With its rows of cushioned pews, the performance was a seated show, one that—aided by dim candle lighting—made drifting off to sleep all too easy.

As the show ended and attendees filed out, many expressed this sheepishly. “I totally fell asleep, but in the best way,” one show-goer mentioned. And truthfully, slipping into dream space was far too easy, aided by Crutchfield’s soft, sloping rifts.

Had the show been situated in a space that boasted the humbling aesthetic features of the Chapel coupled with ample standing room, perhaps more audience members would have been able to engage with the music until the very end. However, it should be noted that filling a room with 500 standing fans might have shifted the dynamic of the show. It would have felt less like a spiritual experience and more like another late-night concert in New York. People in the back would probably have a hard time seeing; it would have felt less egalitarian.

Nick Selden ’16, who booked the show, expressed enthusiasm toward the choice of venue before the show.

“One great thing about Wes is that concerts are a social activity,” he said. “But there are artists that don’t lend themselves as well to that. This show is really going to be about the music, and people are going to get a super intimate aesthetic experience with, in my mind, the best songwriter out there today.”

Organized through a collaboration among WESU, SALD, and Skylight, 500 tickets sold out at the Box Office the day before the show. 400 free tickets went out to Wesleyan students with the other hundred selling for $15 to Waxahatchee fans outside of the Wesleyan community.

Over the course of the coming months, Waxahatchee will be touring the Midwest with Sleater-Kinney and playing a few shows with Kurt Vile in New York and Chicago. Ivy Tripp continues to receive rave reviews (including a glowing 8.1 from Pitchfork), as Waxahatchee’s popularity soars—for all the right reasons.

Though there were moments during Friday’s show when I admittedly began to slip out of consciousness, I am still humming “Half Moon” to myself. Crutchfield’s music is contagious without any of the sugary, negative pop connotations to go along with it. Seeing her do what she does best, in such a special environment, was nothing short of a treat.