In just 10 years Red & Black Café raised over $53,000 in their first financial aid fundraiser. The campaign started in 2005, when the café was just over a year old; now it is finally coming to an end. 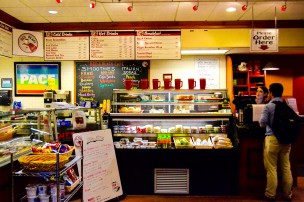 In just 10 years, Red & Black Café has raised over $53,000 in its first financial aid fundraiser. The campaign started in 2005, when the café was just over a year old; now it is finally coming to an end.

Ed Thorndike ’89 and Karen Kaffen-Polascik, managers of WesWings and Red & Black Café, have had a huge presence on campus for over 25 years, since WesWings first opened. They have contributed to the University consistently throughout the years.

“We came up with the fund idea over 10 years ago,” Thorndike said. “We were looking at ways that we could give back to the University. We wanted to help out with financial aid.”

The original plan was to donate some amount of money every year for five years, but in 2010, Thorndike did not feel it was time to stop giving back.

“It sort of just made sense,” Thorndike said. “That was what we were comfortable giving at the time.”

“We were all there,” Thorndike said. “It was a profound moment in the history of the café. Up until that point we had been donating funds that had been restricted to just financial aid. They had been for any kind for financial aid up until the shooting, which we experienced personally. Then the scholarship had been established because it was more of a personal event.”

Rob DeRosa, manager of the Red & Black Café, agreed that the events in 2009 added more significance when it came to the donations.

“It was just nice to know we were giving money,” DeRosa said. “Everyone comes on the assumption that every single student can pay their full load so we felt good knowing that we could help someone go to college. That is a full year of school if you gave it to one person, which is pretty phenomenal.”

The name of the scholarship shows the extent to which Thorndike and Kaffen-Polascik support the University students.

“It means a lot to see that Ed and Karen care about the students they hire and the communities they are a part of,” said Gabby Arias ’17, a WesWings employee. “It is so fun to be a part of this work environment where you meet other friendly student employees as well as make connections with the awesome cooks who are from Middletown and the surrounding area.”

Thorndike, as an alumnus himself, has always shown care and generosity towards University students.

“We always have and we always will donate to Wesleyan,” he said. “I have personally been giving to the University since I graduated. WesWings has done fundraisers in the past, and this was a way to make a long-term commitment.”

In addition to the financial aid Thorndike has given, he has also contributed to other on-campus events in the past. When University President Michael Roth first started working at the University, he, along with other alumni, helped cover the cost of a reception gathering.

This year, to commemorate the 25th anniversary of WesWings, Thorndike plans to target his giving towards organizing events. This Friday, WesWings is sponsoring the Senior Wine and Cheese Reception.

“That is one of the things we had planned this year,” Thorndike said, “and we are doing some other things later on.”

Having alumni that care about the students has a strong positive impact on the campus, especially because financial aid is a cause that is significant to both students and faculty.

“A lot of people feel like the people who have power or a say in the matter have turned their backs on the issue [of financial aid],” Arias said. “But I think that it means a lot to work for people who really do value financial aid.”