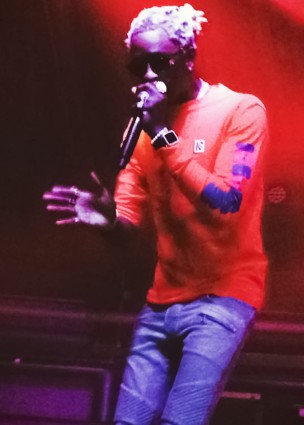 When you think about what the typical Young Thug concert looks and feels like, what do you picture? Perhaps a sold out show at SOB’s in New York City, a venue that has become an institution for young buzzing rappers to show and prove. The electricity surrounding Thug’s rise to prominence would culminate in one of his most energetic and widely scrutinized shows yet. Or maybe a triumphant homecoming performance at Atlanta’s The Tabernacle, where a crowd teeming with hardcore supporters hearing the opening notes of “Danny Glover” would lose its collective mind and propel the rapper even further up Atlanta’s already crowded hip-hop food chain.

However, The Oakdale Theater in Wallingford, Conn. is no SOB’s, and Young Thug’s performance on Saturday, Sept. 19 in this sleepy Connecticut suburb lacked the unrelenting energy and charismatic aura that has long been associated with his rise.

“The concert venue was probably the weirdest part of the event,” said Peter Dunphy ’18 in a message to The Argus. “It was a combination of a barn and a basketball stadium that was converted into a concert venue, hosting a rapper from Atlanta in rural Connecticut.”

Honestly, I had so many questions about Young Thug’s baffling decision to host the second stop on his first nationwide tour in Wallingford. Questions like, where in this relatively small and fairly random Connecticut town was there a flourishing population of Young Thug supporters? Where does Young Thug stay when he is in Wallingford? Is there anywhere to stay there? Why not host the show at Toad’s Place in New Haven, a far superior and better regarded venue, instead of in a glorified conference hall that resembled a barn?

It’s fair to say none of my questions regarding the mysterious managerial decisions of the Young Thug tour were answered, but then again, I didn’t expect them to be. However, what I did expect was a tightly packed set that showcased both the type of gritty trap music that Young Thug has so successfully carved out a unique niche in and his ability to distill his unique energy into pop success (see Jamie xx’s “I Know There’s Gunna Be [Good Times]”). Instead, after approximately half an hour, Young Thug appeared to tire during the performance of a song that introduced him into the mainstream, “Lifestyle,” and walked off the stage.

“During the brief period he was actually on the stage, Young Thug was energetic and played to the crowd,” said Cameron Scott ’19, in a message after the performance. “However, the show was ruined for me when Young Thug simply walked off [the stage], leaving his entourage and, more importantly, the audience confused as to when he would return.”

Putting in perspective that this was Young Thug’s first headlining tour, it’s clear that he is still fine-tuning both the complexities of his set and his general ability to control the crowd. While opener Tory Lanez crowd-surfed so frequently that it appeared to purposefully distract from his decidedly underwhelming catalog, Thug seemed disinterested in engaging with his audience. After half-heartedly shouting an obligatory, “Connecticut, what’s up?” which was met with a mixed response, Thug clearly went into phone-it-in mode. Indeed, his general apathy may have been connected to the odd venue choice.

“I definitely think his performance was linked to the venue,” Dunphy wrote. “He seemed to be giving around a 60-70 percent effort at times compared to maybe the energy he would have given in a major market.”

Early exit and general disengagement aside, the unfortunate conclusion of Young Thug’s performance does not detract from some of its more thrilling elements. An even 70 percent engaged Young Thug still displayed some considerable performance chops, buoyed mainly by the impressive depth of his discography.

When Thug initially strode onto the stage, decked out in a neon orange shirt, skinny jeans and an Apple watch encrusted with diamonds around the bezel, his energy was infectious. As Young Thug claims in a line from his Barter 6 standout “Halftime,” “I swear every time I dress myself it go motherfuckin’ viral.” It’s impossible to disengage from his aesthetic. A style heavily influenced by Lil Wayne’s martian-esque persona of the mid-aughts and the weirdo underground Atlanta rap scene, Young Thug’s charisma is a central conceit in making you believe in his music. Indeed, there is a certain fluidity in Thug’s performance style that synchs perfectly with the undercurrent of free association that saturates his music. Lyrics aren’t simply rapped; rather, the manner in which they are rapped is an art form in it of itself. Pauses, changes in inflection, and the manipulation of syntax and multisyllabic words allow Young Thug’s songs to transfer successfully from the studio to the stage.

During some of his most dynamic numbers, like the Barter 6 single “Check,” and early hit “Stoner,” Thug had the crowd in rapture, making them equal participants in the performance. A simple drop of his shoulder or sinuous dance move breathed life into the songs, and thus it was curious that Thug seemed simultaneously comfortable onstage and almost shy in addressing a crowd of eager fans. After his early energy petered out, even songs as effortlessly fun as “Lifestyle” appeared forced.

Soon after Thug had strode off stage, chants of “Thugger, Thugger” emanated throughout the venue. After telling the front row that Young Thug was “feeling sick,” his DJ began playing a loop of “Good Times,” stoking hope that Thug was just taking a quick intermission, and would be back finish off his set. Alas, there would be no such encore for the hopeful of Wallingford. Young Thug had already departed into the balmy Connecticut night.