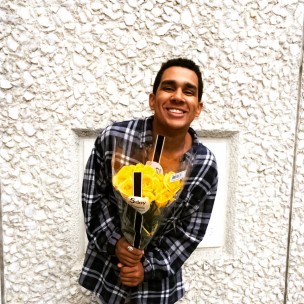 Eury German ’16  is a jack of many trades: he is an actor, a biology major, and a Senior Interviewer at the Admissions Office, but most importantly, he is a dancer. Throughout his time at the University, German has showcased his moves in countless dance productions and even at the occasional rager on Fountain. Despite his jam-packed schedule, German carved out some time to sit down with The Argus to chat about parties, the college admissions process, and his plans for life after Wes.

Eury German: Because I have too many friends and too many acquaintances. I am too friendly to a lot of people. I walk around a lot on campus, and when I see friends or acquaintances that I know, I’m always like, “Wow you look so cute!” Then I’ll be, like, “Eury, that was a little too aggressive.” But I do that—I compliment people when they look good, because the general Wesleyan public looks really good.

A: I know you’re very involved in theater and dance. What productions have you been involved in at Wesleyan?

EG: I’ve been involved in every dance production that you can think of faculty-wise or department-wise. I’ve done Precision Dance Company, which I’m one of the co-directors of. Theater-wise I was in “Cabaret” last semester as one of the dancers. I was also Usnavi in the Wesleyan production of “In the Heights,” who was the lead. That was my first Wesleyan theater experience ever. I got the lead, and that was really fun.

A: How did you discover your love of performing?

EG: My senior year of high school, I started watching “So You Think You Can Dance,” and I fell in love. I would watch it, and during the commercial breaks I would dance around my living room and see if I could do the moves they were doing. And then I realized that I could, and then I was like, “Oh my god. I’m actually really flexible.” And then I realized that I could dance. I’ve also had two performances now where I get off stage and can’t help but start aggressively crying. It even happened to me once before I went on stage for the last section of a performance. The stage manager behind me was like, “Get it together! You have two seconds left in the piece!”

A: Do you ever get nervous before a performance?

EG: Oh, hell yeah! I get really nervous all the time. I think that’s part of it. If you’re not nervous, you’re not ready. Even if you’ve rehearsed [the routine] a million times, you can always do it better. So you need to strive to make it better, even if the person that’s watching you doesn’t know what you’re going to do.

A: How do you deal with those nerves?

EG: Before I go on stage, I always tell myself that the people who are here to see me are always people I don’t know, who will be wowed regardless, because they’ve never seen me before, or my friends who already know that I’m really good. And even if I don’t do as well as I hoped, they’re still going to love me. I just focus on the love coming from my friends rather than being afraid that people I don’t know are watching me.

A: I’ve always imagined that for someone who loves to dance, parties must be awesome.

EG: Oh my god. The past two weekends have been awful, because I couldn’t find a dance party. If I go out and don’t sweat from aggressively dancing, then it’s a very unsuccessful night. I just don’t get why anyone would go stand out on Fountain and not do anything. Why stand around and talk? Let’s talk with our bodies! It’s so much more fun to be dancing to music. Hands down, dance parties are my favorite things to do on the weekend.

EG: My go to dance move is usually just lifting my right leg over my head. I’ll be in a crowd of people and they’ll be dancing, just, like, “Why is someone’s foot next to my face?” which I think is really funny. Oh, and Beyoncé’s one-legged twerk. If you’re going to quote me on anything, quote me on that: an over exaggerated, one-legged, Beyoncé twerk.

A: Are you going to be involved in any dance performances this coming year?

EG: I’m doing a dance thesis, and I’m also dancing in a faculty production. I’m also organizing the Annual Dance Showcase, which you should go to. It’s on Friday, September 25th. Me and my co-director have spent the entire month organizing that. And even with those seven things that I’m already doing, I also want to go audition for Winter Dance, which is the majors’ faculty show. I really shouldn’t audition, because I don’t have time, but I find myself going home for an hour and being like, “I could be dancing right now for this hour. Why not?”

A: Are you involved in any non-dance related activities on campus?

EG: I’m a senior interviewer for the Office of Admissions, which is great. I work every day, so I pretty much have interviews every day. They’re a lot of fun, but sometimes they’re excruciating. Like today, it was excruciating. Other than dance, the admissions job takes up most of my time. I’m also a bio major as well. I don’t think you would have guessed that from everything I’ve said.

A: So, how do you balance your schoolwork with all these different interests?

EG: It is difficult. But I actually have discovered that I do better academically when I have a million things going on. When you have a million things going on, you have to schedule time to study, and when you schedule those hours, you can’t make any excuses. You have to do it now, or it’s not going to get done. Filling up your time with as many things as possible gets you in the zone and makes you concentrate. I also really actually like making lists and agendas.

A: How has Wesleyan changed since your freshman year?

EG: The campus is always getting more beautiful, with places and people. Granted, I work in admissions, so I know there is no criteria, but I always joke that you have to be pretty to get into Wesleyan because, like, if you look around you right now everyone is gorgeous, and it makes absolutely no sense. I didn’t come from a high school that looked like this. So it has gotten prettier, which I didn’t think was possible. It’s been really sad to see everyone I connected with as a freshman and sophomore leave, and be on a campus now where I don’t know most of the people. For example, I don’t know any of the freshmen except for you, and we just met. Also, it breaks my heart when I get to know someone my last year and then they have to leave, which sucks. Have I answered your question? I don’t think I’ve answered your question.

One not fun thing is that [public safety] has been cracking down on everything, and that’s really annoying. Things end earlier. A house can only have a capacity of 23 people, and it’s like, I’m never going to have a party with just 23 people. That’s not going to happen. I don’t really want to get into the [Greek life] debate, but because those spaces don’t exist anymore, we can’t commune and party together in the way that we used to. There’s no common space that we can go to and really dance it out. Even though I am sort of opposed to Greek life, some of the best dance parties and best friends I’ve made have come out of DKE and Psi U, which are no longer a thing.

A: How are you feeling about this being your last year at Wesleyan?

EG: It’s very sad, but like a lot of seniors, I feel at once very scared and very ready to get into the real world. But it’s a really excited scared. To be honest, I would give everything to do it all over again. This is not just me advising you, but this is hands down the best four years of your life. It’s just such an incredible place try to make the best of, because it’s just so, so awesome.  People here are incredible—the classes, the environment. It really nurtured who I’ve become.

A: On a similar note, what advice do you have to freshmen?

EG: I am a big believer that if you want to be happy, you can make yourself happy by surrounding yourself with people who are genuinely contributing to your well-being and your happiness—people who are making you laugh and making you smile. Don’t ever surround yourself with people you have to prove yourself to. These four years will only happen once. This life will only happen once. Why the fuck would you waste it with people you don’t want to be with? Yes, you have a whole life to live, but why not make every single second of your life as good as it can be, you know? If you can think of one reason to be unhappy there are a million and one other reasons to be really happy. Life is great.

A: What are you planning to do after Wes?

EG: I was planning on going to graduate school for dance, but it seems like everyone around me is telling me not to. So I think I might go to Seattle, Chicago, the Bay Area, and New York to try and go audition for companies and try to make if for companies.

A: With a biology degree to fall back on!

EG: Exactly. The thing is it’s really hard to find a part time job with that kind of major, because in professions like public health they usually want you full time. The struggle is going to be finding a part time job so that I can dance on the side.