Stephen Colbert Fails to Make “The Late Show” His Own 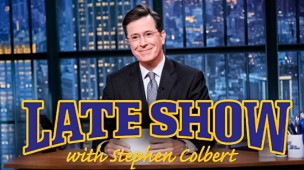 Stephen Colbert’s return to television and his debut as host of CBS’ “The Late Show” may have been the mostly hotly anticipated moment of television this fall. In recent years, no late night show had the cultural impact of “The Colbert Report,” which rode high on its host’s gonzo persona and sharp commentary. Furthermore, “The Late Show,” as headed by David Letterman, might be considered the gold standard for modern late night television on a major network. Though in his last few years Letterman was far from as sharp as he was in his heyday, “The Late Show” at its best was a warm and focused blast of comedy anchored by a singular talent.

Taking this into consideration, it would be all too easy to be disappointed by Colbert’s debut on Tuesday, which felt scattershot and anxious, unsure of itself tonally even as it oozed surplus energy. Anyone expecting something as singular as “The Colbert Report” might be convinced by that hour alone that network television is not the place for Stephen Colbert, and for all we know, they may be right. Though Colbert did his absolute best to remake “The Late Show” in his image, the end result was spotty and disappointingly toothless, an hour of television that seemed so focused on ingratiating its host to the public that it forgot what the public had come to love about the host in the past.

Not that its geniality felt entirely false. In fact, some of “The Late Show with Stephen Colbert”’s best moments were those during which the program leaned into sincerity. An opening segment in which Colbert sings the national anthem with various people across America felt sweet without being kitschy, even if it went on a tad too long. Furthermore, the host’s seemingly genuine excitement about his new position added a whiff of glee to even the ricketiest gags, including a regrettable shot at some winking product placement that didn’t seem sure of exactly how hard it should be winking.

Those moments when the show tried to balance the wackiness of “The Colbert Report” with the more straightforward approach of “The Late Show” were easily the weakest in the hour. When leaning into the expectations of network late night television, Colbert seemed awkward if genuine, his distinctive edges sanded off. On the other hand, when “The Late Show” stretched to try to accommodate the zanier elements of the Colbert persona, it often folded too soon, seemingly unwilling to commit beyond a certain threshold of weirdness. Sure, CBS seemed game to let Colbert bring a few of his hallmarks with him to the stage (his addressing the audience as “nation” and a shout out to his old Captain America shield garnered big applause) but other attempts to move the humor outside of the standard late night template seemed comparatively halfhearted. One particular gag involving a meddlesome cured medallion started out on an engagingly strange road before quickly folding.

All this might have proven less disappointing had the hour’s two interviews gone better than they did. On the “Report” Colbert’s conversations with politicians and cultural figures were easily the highlight, indulging the host’s bit while offering some honestly cogent insight. Colbert managed to bring his guests into his orbit without ever sacrificing what made them interesting just to promote his central gag.

Since there really isn’t a central gag to “The Late Show” there was never really any danger of the interviewees being swallowed up. More so than on “Report,” guests are really the foundation of network late night. Still, I doubt anyone would have predicted that either of the two conversations on Tuesday would feel so inconsequential, both as humor set pieces and interviews in general. Even if the show had used the conversations purely as shills for its new host’s style and personality, they most likely would have felt distinctive.

The first of the pair, with actor George Clooney, announced itself as fluff (not necessarily a bad thing) right from the get-go. Both men emphasized that Clooney really didn’t have anything to promote over and over before ribbing each other for the next few minutes. The segment wasn’t a total bust; Clooney is nothing if not unfailingly charming. Still, the conversation often had the feeling of dead air, a sort of genial, chummy filler meant to take up space while the program tried to sort itself out. Like the rest of the show, the conversation between Colbert and Clooney felt consistently sincere and well-meaning, but frustratingly inert. When it turned out that Clooney did sort of have something to promote, one might expect the tone of the interview to pivot but it never really did. Even as the focus of the conversation switched to more serious topics, the affect still felt thin.

That Colbert’s second interview, with presidential hopeful Jeb Bush, felt equally inconsequential was perhaps the biggest disappointment of the night. Whereas the Clooney interview postured itself as far from a sales pitch as possible, the Bush interview read like nothing but. In the past Colbert might have been expected to push back a little harder, here he just let Jeb say his piece. A few questions seemed like Colbert did want to challenge some of Jeb’s points, but the host really never pursued them, quickly backing off if it seemed like Jeb wasn’t game to go down a certain line of inquiry. For anyone who wanted a primer on the candidate’s views, the interview might have provided some level of satisfaction, but, in the end, the segment seemed to amount to little more than softball after softball.

Despite the rocky start, it would be unfair to declare “The Late Show with Stephen Colbert” a bust right off the bat. More so than most television formats, late night takes time to find its feet, and this seems especially true in Colbert’s case. The transition from Letterman to Colbert is a big one, happening on board what is arguably CBS’ flagship. That the network might be averse to risk so early in the process is understandable, even to be expected. Certainly, given the effectiveness of Colbert as a singular personality, it’s disappointing, but there’s reason to hope that the devotion to safety and palatability is only temporary. Is it likely that Colbert is able to drastically reshape “The Late Show’s” format? Probably not. As things stand, Colbert has been brought on board a franchise, and regardless of his earlier success doing things his way, a network like NBC will be primarily interested in using him as an asset to draw attention to that franchise rather than to reorganize its pieces. It is, of course, entirely possible that “The Late Show” does gradually begin to change its mold slightly to account for the new type of energy Colbert is bringing. If this does happen, it will be exciting to see just how and when. In the meantime, viewers might simply need to be satisfied to welcome back a familiar face, and hope to get some more of what drew them to Colbert to begin with. Just don’t expect a revolution.