When We Had a Campus Airplane

A trainer airplane used to reside on the University's campus. Students were not sad to see it go. 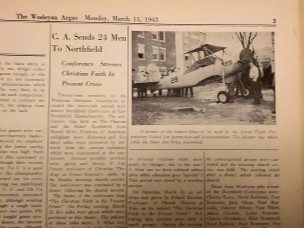 It was March 1946, and life at Wesleyan University had mostly returned to the way it was before the Second World War. Students who left to fight in the European or Pacific Theaters returned to campus, assisted by the G.I. Bill. Professors, many of whom had left to conduct research for the war efforts, came back to teach.

But there was one major remnant of the war still on campus, and it was driving students crazy: An airplane was parked outside Harriman Hall (now the Public Affairs Center).

During the War, the University gave the United States Navy permission to run a training program called the Navy V-5 program, according to Argus articles from the 1940s. Naval cadets involved in this program took military training classes, taught mostly by Wesleyan professors, on Wesleyan’s campus.

The V-5 program was geared toward teaching cadets how to become pilots. Because of this, several classes, such as “Principles of Flight” and “Familiarization with Aircraft,” called for cadets to learn how airplanes operate.

And what better way to teach students how airplanes work than to put a trainer airplane on campus? So, in March 1943, one such plane was assembled outside Harriman Hall.

There was a cost, though, in participating in this program. The Navy and the University did not have the same understanding of and support for academic freedom, and many instructors complained about how rigid military regulations were.

According to Henry Herge, a Naval officer who coordinated the Navy V-5 program at Wesleyan, one instructor said, “An awful lot of time [was] lost with haircuts, parades, inspections, and much of the rest of the military machinery.”

Professor Carl Leo Stearns, of the Astronomy Department, wrote in a letter to Lieutenant Schneider, the Navigation Coordinator of the Navy V-5 Program, that the Navy’s syllabus was not consistent with the mid-term and final exams it administered. Not the syllabus, nor the exams, nor the frequency of quizzes were within Stearns’s power to control.

The War, too, took a toll on the students. Nearly every aspect of campus life revolved around wartime efforts. Students learned on the pages of The Argus about fallen classmates and fallen professors. A service flag hung outside of Olin, with stars displayed on it marking the number of alumni who were dead or missing in action.

By the time World War II was over, students were ready to be done with the military presence on campus. They wanted campus as it was before the War.

But a year after the war had ended, the Navy had yet to remove the trainer airplane from University premises.

The airplane’s presence on campus quickly became intolerable to students. In March 1946, “a distracted Harriman Hall student” living near the airplane wrote a letter to the editor of The Argus.

“Can anything be done to remove that airplane from next to Harriman Hall?” the letter writer asked.

Elementary and high school students, the writer complained, played on the airplane every day, distracting him and others from getting work done. And there was no way, he wrote, of stopping them.

“Reasoning with the kids gets one nowhere quickly and in some cases missiles have been hurled at the kids by irate students,” he wrote. “Before someone concerned gets hurt how about some action?”

Action soon came, although the campus administration had nothing to do with it. Instead, another student, also disgruntled, took action.

One month after the letter to the editor, The Argus published an article saying that someone had stolen the propeller off the airplane, along with part of the wing. The thief, the article said, carved out part of the wing with a knife.

“Suspicion falls heavily on ex-Air Corps pre-meds since only a birdman would be interested in the plane and a surgeon’s hand was needed to make such a deft slice,” the article said.

Like the letter writer, The Argus was not disappointed to see part of the plane gone.

“An investigation [into the suspect’s identity] is not yet underway and probably never will be since no one cares how the airplane is removed as long as it goes,” the article concluded.