Sound gets all mixed up at The Mash, an annual concert showcasing student bands. 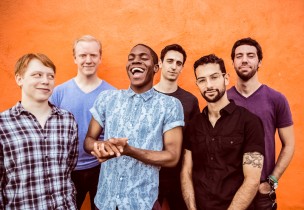 For the past three years, The Mash has introduced new students to the Wesleyan music scene and served as a critical early showcase for buzzing campus acts to gain exposure. With bands performing simultaneously on stages at Olin, The CFA, North College and Foss Hill, The Mash has become an affair that not only caters to a wide range of Wesleyan musical palettes, but also seeks to engage the entire campus with its literally multi-platform approach.

Co-sponsored by the Center for the Arts and the Office of Student Affairs, the event draws inspiration for its all-day music from Fete De la Musique, or World Music Day. Returning acts include acapella groups Quasimodal and Slavei, as well as 10-piece jazz/hip-hop fusion band Chef and the President Roth-fronted Smokin’ Lilies. Here are several acts to look out for at Mash 2015.

Previously one of Wesleyan’s premiere underclassmen bands, Chef’s position as opener for Mash headliner The Rooks is poised to put them at the forefront of the Wesleyan music scene. The 10-piece group now has a new single to play, summer release “Blockhead,” a hard-hitting two-minute jam where rapper Miles McLeod ’17 delivers two quick flowing verses with lines like, “Run on the abstract/riff on the specific/My head in the clouds and my toes in the Pacific.” Anthony Dean ’17 provides a killer bassline on the track as well.

The band has plenty more to offer as part of its brand of funky R&B covers and ska-inspired hip-hop original pieces, particularly in its trio of female vocalists, Lydia Elmer ’17, Annie Flom ’17, and Mimi Goldstein ’17. Chef had its first concert with The Rooks last spring at Alpha Delt, and a reunion between these two groups is most definitely needed.

After a raucous concert last April at Alpha Delt with Chef, Wesleyan music alumni The Rooks return to headline this year’s Mash.

“We’re always excited to come home to Wesleyan and play some music,” wrote lead singer Garth Taylor ’12 in a Facebook message. “We’ve done a lot of great shows at different colleges, but there’s an energy specific to live music at Wes that we can’t wait to be apart of again.”

This summer, The Rooks released a new EP, titled Wires, and embarked on a tour throughout the East Coast and into Canada to promote their new record. With shows at venues such as Rockwood Music Hall in New York City, the group tested out covers of R&B staples such as Usher’s “Climax” to add to their already burgeoning collection of impressive R&B covers (such as their soulful take on D’Angelo’s “Untitled (How Does It Feel)” at Alpha Delt last year).

“We’ve kept pretty busy since the last time we were on campus,” Taylor wrote. “We released a music video for our song ‘Intermission’ in May, and dropped our second studio EP, Wires, in June. ‘Tis the season for fall shows, so we’ll be continuing throughout the rest of the year. Can’t wait to see everyone this Friday at Mash!”

Wires draws clear influences from these aforementioned R&B vanguards, as well as luminaries such as Stevie Wonder and The Talking Heads. A funky take on classic R&B, heavy on bass and electric guitar riffs, Wires is a breakup record. With grooving standouts like “Bury Me Deep” and “Secrets,” The Rooks atmospheric vibe should mesh well with Foss Hill at sunset.

Sneaky Sugars burst onto the Wesleyan music scene last year, injecting some youthful energy into an already crowded market for alt/indie rock bands. After opening for groups such as MFDP at DKE last winter, the group headlined their own show at 200 Church in April.

“We’re excited to revive the Wesleyan social scene through the power of music,” lead guitarist Karina Caban ’18 wrote in a message to The Argus.

In a fortuitous turn of events the band’s core four, singer/rhythm guitarist Ryan Guarino ’18, Caban, bassist Jack Maraghy ’18 and drummer Max Cembalast ’18, all found themselves living and playing music in New York City this summer. The group played three shows at various venues in the city, notably a July 25 concert at Arlene’s Grocery, where the foursome for the first time debuted original material they had been working on in the studio. While the band regularly performs covers of indie rock favorites such as “Take Me Out” by Franz Ferdinand and “Mardy Bum” by The Arctic Monkeys, it’s their yet-to-be-officially released original “I Fall Around,” heavily influenced by The Strokes, that makes for one of their most exciting live performances.

Post-punk quartet Sleep Kid returns ready to play new music this fall in the form of last year’s EP, My Electric Ghost. The band is Nick Seldon ’16, Rachel Fox ’16, Leo Grossman ’16, and Justin Friedman ’16, and resembles the sonic lovechild of Mac DeMarco and The Velvet Underground. On standouts from My Electric Ghost, such as “Sleep Kid” and “Hey Jean (Sleep Kid TV Theme Song),” guitar riffs slog along consumed by a hazy landscape and the initially jarring crooning of Seldon.  The self-described “sea-punk group of musicians and magicians” is indicative of the impressive array of artists playing on the North College stage, from Slavei to rap duo Lo-Qi.