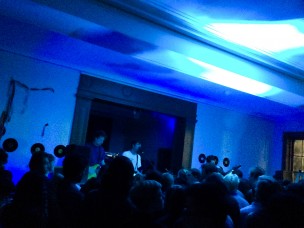 To paraphrase a close friend, there are two types of live acts: workmen and showmen. Workmen keep their heads down. They play the music, and they play it well. Their performances are technically astounding and rigorous. Showmen, on the other hand, might not play their music exactly as it appears on the record, but they fill in the gaps with an energy and charisma that simply cannot be contained within a record. They reach out to the audience and make the experience of the concert about much more than the music. In the hands of the showmen, there is no longer an audience, more so a congregation. This past Friday at Eclectic, indie-punk band Titus Andronicus somehow managed to be both.

Following performances by two wonderful openers, FIVE GUYS (a Wesleyan student outfit composed of juniors Leo Grossman, Nick Selden, Ethan Hill, Delaine Winn, and Angus MacDonald) and Wicked Kind (an indie power pop trio composed of Titus’ Eric Harm and Julian Veronesi, alongside Davey Jones of Lost Boy ?), Titus took the stage a little after midnight, faced with a sea of excited, invigorated, and already sweaty fans. The return of the New Jersey-formed band had been wildly anticipated since announced, if haunted by the unfortunate circumstances of Titus’ last visit to Wesleyan, during which concert-goers groped the band’s violinist Amy Klein as she crowd-surfed. Still, if the stain of that incident at all colored Friday’s show, it did so imperceptibly. All three acts took to the stage joyfully, dousing the audience with performances of exponentially escalating fervor. By the time Titus announced its last song (for the third time), Eclectic felt like a balloon about to burst. Rage, ecstasy, and monumental guitar lines filled the air.

FIVE GUYS, which began its set just after 11 p.m., started the night on a relaxed note, letting its sharp surf-rock-influenced set waft through the space and out to the back porch of the house. Cast in deep blue lighting, the members of FIVE GUYS moved confidently from song to song, reaching out intermittently to the audience to graciously thank them and to announce the next track. A far cry from the raucous energy of Titus’ aesthetic, the five-piece opener acted as a perfect lead-up, its music building in intensity as the night went on. Students in attendance may have started out swaying, but by the time FIVE GUYS ceded the stage, the pulse of the audience thumped.

Wicked Kind, taking the stage swiftly after FIVE GUYS’ departure, began its set on a similarly mild note. Weaving together smooth and bright chords, the three musicians embraced the pop sensibility of some of their music before working towards the heavier, rawer songs that completed their performance. Announcing mid-way through their set that it had a song for anyone who knew about self-loathing, the group launched into a roaring anthemic ode to feeling repulsed in your own skin, drawing on the broad emotional registers of mid-2000s pop punk acts while honing the surrounding music to create a song in which the shiny jangle of the melody never undermined the discomfort of the subject matter. As the audience leapt about, Wicked Kind’s Harm and Veronesi showcased the technical skill that they would soon put to work with Titus. By the time they announced the end of their performance, signaling the arrival of Titus-in-full, it seemed as though the temperature of the crowd had already exceeded that of other shows.

Though it took the members of Titus Andronicus a few minutes to set up their instruments, they tore through the first three songs of their set without missing a beat, or giving the audience time to catch its breath. Leading the charge, vocalist Patrick Stickles howled into the mic, writhing along with his twisting guitar lines, shuddering in time to the percussion, which swelled up from behind Stickles, Veronesi, Jonah Maurer, and Adam Reich. As the band sunk its teeth into their new single “Dimed Out,” it seemed impossible that they could make it through the entire track at their unflagging pace. Still, as Stickles leaned into the mic stand, practically screaming the final refrain, the whole group was invincible, filled with boundless energy. Onstage, that furor was recreated and multiplied, each member of Titus hurling himself into the music like a man possessed.

Composed of material from the band’s first two albums, The Airing of Grievances (2008) and The Monitor (2010), as well as two yet-unreleased songs and a slew of delightfully weird covers, Titus’ set felt intentional and improvised all at once. At one point, Stickles paused between songs, announcing that he was about to teach some rock n’ roll history. Briefly eulogizing recently deceased legend Ben E. King, Stickles began a soft, harsh cover of “Stand By Me.” As the audience joined in, Reich’s and Stickles’ guitars climbed and climbed until the song seemed to burst open during its last refrain. Then, without any warning, Titus’ new hard rock version of King’s classic morphed into a cover of Sean Kingston’s “Beautiful Girls.” The combination of the songs was both beautiful and ridiculous, and as Stickles snarled, “You got me suicidal, suicidal,” he seemed to be participating in some sort of alchemy, or whatever it’s called when one turns a Sean Kingston cut into gold.

From there, the band transitioned into the ferocious, merciless “A More Perfect Union” (though, unfortunately, excluding the album version’s opening quote from Abraham Lincoln). Tearing through the seven-minute Jersey odyssey, Stickles and company still managed to keep their energy elevated, such that when they announced they’d be closing the set with a cover of The Cars’ “My Best Friend’s Girl,” there were still two more songs waiting in the wings. Following the jangling danceability of the ’80s standby, Stickles opened up to the audience about the dangers of being overly oppositional.“You shouldn’t feel better than someone just because you’ve been a vegan for nine years and they’ve only been a vegan for eight years,” he chuckled.

From another performer, the sidebar might have felt preachy or cut the momentum of the concert, yet Stickles spoke with such big-hearted sincerity that the whole tangent felt like one more operatic album cut. Explaining how he had once hated a dorm-mate, Stickles transitioned deftly into “Fear and Loathing in Mahwah, NJ.”

Stickles once again took a moment of pause, apologizing for being ready to leave the show on such a dour note. With that, he promised the last last song of the show, in the form of a gleeful cover of Weezer’s “The Sweater Song (Undone).” Once an exhausted audience finished dancing, Stickles held a long pause, before leaning into the mic to begin the Steve Miller Band’s “The Joker.”

Both furious, rakish, and unforgettably warm, Titus Andronicus opened its music up to the audience. With a sound even sharper and crisper than on its recordings, the band demonstrated everything that makes its maximalist punk so wickedly engaging and deliriously fun. Still, for all the political and emotional fire buried in those raging instrumentals, perhaps no moment better exemplifies Titus or their performance as Stickles’ jaunty repeated refrain to his bandmates: “Come on, guys! These kids wanna dance!”