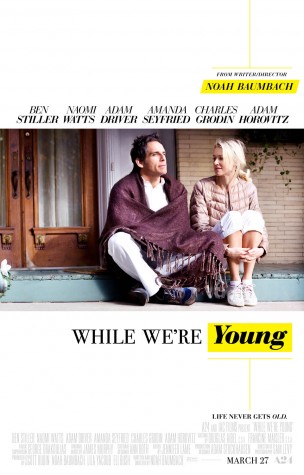 “While We’re Young,” the latest feature from director Noah Baumbach, is a tricky film, by turns both warm and bitter. It seems simultaneously joyous and wounded, at times unsure of how it wants to convey what it has to say. It’s as though Baumbach himself were still trying to get a secure read on his characters and their lives. While at times this can be frustrating, it is also charming and sincere, giving the picture a lived-in quality that is only heightened by the warm reds and browns of the scenery. As Baumbach’s camera tracks along the streets of Brooklyn with his cast, the director offers the viewer access to a sort of gawking, a way of digesting the world that sparkles with equal parts wonder and disdain.

“While We’re Young” follows forty-somethings Josh (Ben Stiller, only becoming more disarmingly handsome with age) and Cornelia (the always delightful Naomi Watts). He is a struggling documentary filmmaker and she a producer, the daughter of one of his idols. Following a college lecture, Josh is approached by Jamie (Adam Driver) and Darby (Amanda Seyfried). Jamie explains that he’s a massive fan of one of Josh’s little seen works, and invites Josh and Cornelia out to dinner. The couple are quickly caught up in the slap-dash energy exuded by their new younger friends, partaking in Iowaska ceremonies and enjoying Connecticut’s supposedly unparalleled thrifting. Still, beneath all the moonlighting Josh begins to feel his old insecurities and self-doubts bubbling up, complicating his friendship with Jamie and his relationship with Cornelia.

It’s not a particularly revolutionary premise, and “While We’re Young” often seems a little too proud of things it’s willing to skewer. Yet, Baumbach does a fantastic job of painting the difficulties of growing older alongside a world of seemingly infinite youth with a finer brush than others might. While at times the film does make sweeping statements about what the young value versus the old, other moments seem carefully placed and orchestrated to undermine traditional ideas of that divide. In a particularly funny montage, Josh browses Netflix while Jamie and Darby cuddle up to watch “The Howling” on VHS; Cornelia selects songs on her computer while Darby settles down next to a record player. It’s a fun subversion of the idea that every new generation becomes more and more dependent on technology, while doubling as a playful dig at Jamie and Darby’s ostentatiously vintage lifestyle.

Baumbach’s best digs come, in fact, not at the expense of age or youth but at the expense of the sort of empty gestures that define Darby and Jamie’s attitudes. Time and time again, the film asks the viewer whether any of its characters have any understanding of sincerity or generosity, or whether they’re all in their own ways consumed by petty little ironies and delusions.

Perhaps the film’s funniest moment comes around the halfway point, as Cornelia passionately explains to Darby the intersecting terror and freedom of considering whether to have a kid. “I could just have one right now. Maybe I will,” Darby exclaims. Then, after a beat, she chirps (as only Seyfried can): “I love kids who don’t speak English.” Moments later, Darby welcomes Cornelia to her hip-hop dance class. There are times when even these jabs can seem cheap, as though Baumbach simply looked up some “hipster” traits and considered how to ridicule them. When they do work, though, it is in ways that only this filmmaker can manage: jokes that feel perfectly specific and acidic, while resting atop something much thicker and harder to parse. When Josh finds himself arguing with an old friend, wearing a fedora bought at Jamie’s suggestion, his confused buddy can’t help but point it out. “You look like one of those guys that used to cruise by prom but was too cool to come inside.”

To say that “While We’re Young” is a deeply anxious film would be something of an understatement, but Baumbach does an admirable job of ensuring that the various tremors running down the picture’s spine never sour the whole endeavor. When it comes time to address these questions directly, the script can be somewhat hit or miss, but the impact of those moments that do manage to stick the landing are often astounding. In the film’s closing third, as the plot picks up, its indictments become somewhat broad, diving into issues of authenticity and integrity with a bit too much focus on filmmaking. When Baumbach locates these issues in the characters, however, they are far more successful. A last minute subversion of catharsis does a good deal towards redeeming some of the more rote developments, but only in that it allows the film to slow once more and spend some time with Stiller and Watts alone with one another. Their chemistry is uniformly wonderful, and the sense of ragged affection that they share seems perfectly tailored for the film, springing out of some implied history that goes deeper than the explicit details of the backstory.

The cast as a whole is delightful, with strong material divided up evenly among roles. Driver, who seems to be experiencing a well-deserved ascent, makes Jamie nearly unreadable.. He’ll hug you warmly and sing your praises, but he’ll never offer to pick up the check nor will he seem especially grateful when you do. Seyfried, too, delivers a perfectly understated performance, reading her lines with a carefully measured balance of confidence and apathy, as though whatever is said either matters immensely or not at all. And as Josh’s father-in-law, Charles Grodin once again proves his ability to play the perfect prick, even as he invests his sneers with a strange, weathered empathy.

In the end, “While We’re Young” is a thoroughly flawed and shamelessly open-hearted piece of cinema, moving through the veil of irony to offer its audience access to real joy and pain. It’s a film that’s boldly interested in the petty, digging through emotional minutiae and memorabilia to assemble something much larger and more imposing than any of its parts suggest. Baumbach’s picture captures late-stage calcification of habits and desires, and hammers away at them without thinking twice. The result is often messy and uneven, wandering through various chambers and tangents of feeling, but rewarding in ways that a more formally impressive film might not be. There’s something fitting about the strength of the bedraggled picture over the sleeker one, and it’s a testament to Baumbach’s skills as a filmmaker that he can make something this grouchy feel so fundamentally generous.