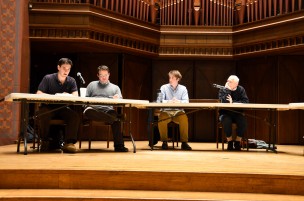 Kevin Winnie ’16, co-chair of the Government Majors Committee, expressed excitement about hosting the debate, since there has been no similar event in recent years.

The debaters began by defending their beliefs regarding the role of government in American civil society. As the debate gained momentum, the issues grew more contentious. One of the most controversial topics of the afternoon was the gender wage gap; Sveen claimed that the Lilly Ledbetter Fair Pay Act is discriminatory toward women, spurring a rapid back-and-forth dialogue between the two parties.

“What I think is the most discriminatory [thing about] the entire wage gap argument to begin with is that…the legislature is attempting to legislate under the perception that there is a 23-cent wage gap, which is really not accurate,” Sveen said. “They did a study in 2012 with first-year college students, and they tested many women…[and] the real pay gap is six cents.”

Sveen went on to explain some studies she had read, arguing that because female librarians were often compared to male professional athletes (two relatively different professions), the subsequent claim that the average woman makes 77 cents to the man’s dollar is incorrect.

“Personally, as a Democrat and a huge proponent of the Lilly Ledbetter Fair Pay Act, it was hard for me to see [Sveen] oppose the Fair Pay Act, even calling it discriminatory,” said Aimee Jones Wilkerson ’17, an event attendee and the Wesleyan Democrats Communications Coordinator.

Shea disagreed with Sveen’s statement, arguing that the only thing the Lilly Ledbetter Fair Pay Act intended to do was say that people have a longer period in which they are allowed to sue companies that engage in discriminatory pay practices, and that no civil law was altered in the process.

“Pharmaceutical companies have too much liberty and discretion over the prices that they charge,” Warner said. “I think that the easy solution would be to pass a law that says they can’t charge exorbitant prices for simple medical procedures, and I think you’d probably want to do that through, say, the government.”

The discourse then shifted toward the topic of welfare benefits with respect to their accessibility to low-income American citizens.

“The problem with poor people is not…that they are lazy, or of a certain race or education level,” Nucci said. “It’s that they don’t have the money to get the things that we deem acceptable from society. What I don’t understand is…why we can’t just give people more money to go buy [these things]? My question is why do we need the government to regulate this?”

The participants concluded the debate by answering questions from the audience on subjects ranging from the upcoming presidential election to foreign policy. David Lieber ’17 shared his reasoning for attending the event.

“I haven’t been involved in many political activities, and I thought that going to a debate which shows different political facets of the campus engaging in dialogue would be a good start,” Lieber said.

Winnie expressed his enthusiasm for the event organizing process, saying that it was exciting to hear the talk around campus leading up to the debate.

“As I was discussing the implications of this debate with [the candidates], we all knew this event was going to be conspicuous,” Winnie wrote. “Being the chief organizer behind this event, I was excited to see how the Wesleyan community would react.”

Overall, Winnie added that he was pleased with the outcome of the debate.

“I loved hearing the back and forth between the two groups,” he wrote. “Each topic was well contested and I believe the entire debate was fun to watch. If we could change one aspect of the event, I believe that we should have allocated more time as one hour was not enough to get through all our topics.”

Wilkerson was also happy with the way the event turned out.

“I would love to attend another event like this in the future,” Wilkerson said. “I think Wesleyan students tend to think that most students at Wes are staunchly Democrat, but there is an ideological spectrum represented here on campus. We need to do more as a student body to create a comfortable climate for our politically diverse discussions.”