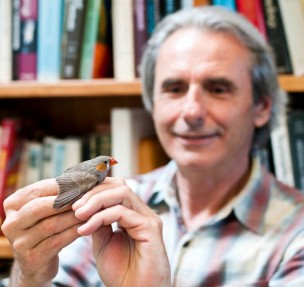 With the exception of George Clooney, who became sexier as he developed charcoal gray hair and crow’s feet, most men become less attractive to women as they age. Male zebra finches, however, become more attractive to females as they get older. As they age, males have more time to practice their song, and the sexiest attribute of a male zebra finch is the consistency of a perfected tune.

Professor of Biology John Kirn studies the development of neurons, known as neurogenesis, in zebra finches, and how neurons that are added in adulthood help these birds learn their song as well as crystallize their pitch and execution.

“One of the things that is really unique about birds is their ability to produce neurons throughout life, and many of these neurons go into these brain regions that control singing,” Kirn said. “So it provides me with a perfect window to ask the question of what is the functional significance of adult neurogenesis?”

Adult zebra finches continue to produce neurons that are extremely active in two different pathways of song production: learning and practicing. Neurogenesis in the learning pathway helps finches pick up new songs each season, while the practice pathway helps them perfect a song, a process known as stereotyping.

Neurogenesis is most often associated with neuroplasticity, or the ability of neurons to forge new connections in the brain, allowing individuals to develop new functions. Neuroplasticity explains why young animals, whose brains are rapidly adding new neurons, learn faster than adults, and how older adults can still learn new tricks because neurogenesis continues (at a slower rate) into adulthood. Kirn and his colleagues, however, discovered that in the practice, or stereotyping, pathway of birdbrains, neurogenesis supports crystallization of a particular song, preserving a behavior as opposed to opening the door for a new behavior.

By selectively killing neurons produced in adult finches, Kirn and his colleagues disrupted finches’ songs so that they could no longer sing a tune that attracts females. A boom of neurogenesis replaced the dead cells, and finches recovered their voices. However, this neuroplasticity was not associated with a new learned behavior, as the scientists had predicted.

“The interesting thing was that [after recovery, the finches sang] the same song, and that was really fascinating to us,” Kirn said. “The simple notion that if you have a wave of replacement you’re going to automatically have a change in the vocalizations is not right.”

Kirn and his students ran a similar experiment, in which they injected the vocal chords of finches with Botox. Again, neurogenesis helped the birds to regain their ability to sing their previously learned song, not a new one.

“We are challenging the simplest notion of what neurogenesis is good for,” Kirn said. “Most people focus on neurogenesis in adulthood being a rejuvenation process which is good for learning new things, and what our research is consistent with is the idea that it’s important for preserving old behaviors as well.”

While Kirn hesitates to apply all findings in birds to human health, the broader implications of neurogenesis revealed by zebra finches may tell us about the human brain.

“There is a lot that is very similar about human language learning and song learning,” Kirn said. “In some ways a bird is a better model than a rodent for humans.”

The role of neurogenesis in the preservation of function, in addition to learning, could very well be important for understanding not how humans like Clooney manage to get sexier as they age, but how older humans crystallize knowledge, and how we can prevent neurodegeneration and preserve what we have learned as we age.