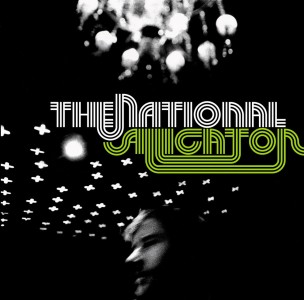 There are few bands as preoccupied with the petty ravages and triumphs of aging as Brooklyn’s The National. Record after record, The National has produced stretches of swirling orchestral post-punk revival that seem to crease and hunch, waterlogged with the rumbling of frontman Matt Berninger’s baritone and strung out along mournful violins and horns. It’s rock music distilled down to a weary half-smile: exhausted, resigned, beleaguered, and grateful.

It feels especially fitting, then, to have the opportunity to look back on their third album, Alligator, in the wake of its 10th anniversary, which just passed on April 12. As a musical landmark in the band’s catalogue, Alligator’s importance cannot be overstated. Moving through the outfit’s records, Alligator is the moment when it feels as though The National finally captures the sound that they have worked so hard to deepen on their subsequent three albums, taking the anger and bitterness of their self-titled debut and woefully underrated sophomore entry Sad Songs for Dirty Lovers and infusing it with new evolving gradients. Alligator—both in terms of the group’s own history and the stories it’s interested in telling—is a record on the cusp. It hovers above a great drop, having come upon the moment where youth is supposed to transform into adulthood only to find that any promised bridge was a lie. By turns terrified and prayerful, it welcomes listeners again and again to a crossroads that feels perennially familiar and somehow wholly alien.

For a record so preoccupied with disorientation, Alligator bursts to life in a rush of rolling percussion and confident piano lines. “I think this place is full of spiders / I think they’re on to me,” Berninger sings on “Secret Meeting,” over the dueling guitar lines from bandmates Aaron and Bryce Dessner. It’s both an announcement of purpose and a fit of anxiety, a tightening of muscles and a quickening of breath. Berninger continues: “Didn’t anybody / Didn’t anybody tell you / Didn’t anybody tell you how to gracefully disappear in a room.” More than any other vocalist working, Berninger has always been a master of a sort of deadpan horror: absolute agony rendered as edging unease. As the record progresses, the walls continue to close in, the pressure builds, and the air leaves the room. On the album’s second track, “Karen,” Berninger finds himself trapped in a strange fetishistic folie à trois with his lover and her father, the nature of intimacy changing, curdling, complicating, perverting with age. “It’s a common fetish for a doting man,” he snarls, “to ballerina on the coffee table / cock in hand.” Beyond the boundaries of that inner turmoil, Alligator watches the world become big and foreign once more (“I wouldn’t go out alone into America”), a confusing hybrid of potential promised in childhood and responsibility and danger threatened in middle age.

Much of Alligator is fascinated with the ways in which we find ourselves warping in synchronization with the world around us. “Daughters of the SoHo Riots” watches as the spaces worshipped in youth are slowly robbed of their old magic and the people who once brought them to life. “Out among the missing sons and daughters of the SoHo riots / I’m here to take you now,” Berninger mourns, before adding, “How can anybody know how they got to be this way? / You must have known I’d do this someday.” It’s a lament for a loss of innocence, but it refuses to blame the world. Rather, the song tracks the ways in which we disappoint our younger selves with the compromises we make, the relationships and we privilege, and the objects we choose to value. As the very next song, “Baby We’ll Be Fine,” bursts from the rubble, Berninger imagines a performance review from his boss as an affirmation of warmth.

If the first half of Alligator is an elegy to change, the backend is a series of small rebellions and reclamations. On “All the Wine,” Berninger swaggers out from behind the chiming guitars in a state of drunken euphoria: “I’m put together beautifully / Big wet bottle in my fist / Big wet rose in my teeth / I’m a perfect piece of ass / like every Californian.” It’s a moment of reckless self-love and it seems to announce the album’s coming escalation as it moves from surrender to gleeful mania. On “Abel,” the band recaptures the anxious fury of Sad Songs: Berninger pleading with a friend (“Abel, come on / give me the keys, man. / Everything has all gone down wrong. / I see water on the bridge. Well, you better hold my hand through this”) before erupting into the howling refrain of “my mind’s not alright!” It feels like a fusion of the drunken intensity of “All the Wine” and the simmering fears of earlier songs: “Well my mind’s gone loose inside the shell / I’m missing something!”

In the wake of “Abel,” the record quiets momentarily with “The Geese of Beverly Road,” which feels like a moment of blissful clarity as Berninger envisions himself and a companion running up and down the streets of Brooklyn, setting off car alarms as though they were teenagers once more. In any other hand’s “Geese” might be an unbearably saccharine track, but the beautiful orchestration and painful sincerity holds the song together as the band imagines a pocket of youth tucked away from all the numbing ravages of age. “We’re the heirs to the glimmering world,” Berninger sings, and it feels like both a promise and a question. It’s a languid, generous suggestion of salvation in what once felt like a bubble of apathy. There’s something in the world that we can deserve, that we can be bound and comforted by: “Come be my waitress and serve me tonight / Serve me the sky tonight / Come be my waitress and serve me the sky with a big slice of lemon.”

In the silence that follows that shouting, it feels as though Alligator has found something raw and personal in the listener, torn it out of their stomach, and presented it for display. It’s a brilliant, disquieting, ugly mixture of fear and love, rage and determination, a taxonomy of the things lost and gained in the face of encroaching time.

As Alligator turns 10, all of these feelings seem to crystallize and sharpen, informed by the time spent with the record and the sense of the band’s own growth over their last three albums. Though the beginning of something musically larger than any one track or LP, Alligator still feels something like a prophecy fulfilled. It’s bold and sentimental, raw and rigorous in its examination of all of the insecurities that manifest as we are forced to look further and further into the future. It’s a warning, and a eulogy, and an apostasy, and an embrace.