“ESQUE,” a series of performances about non-normative desire designed by a group of students in response to WesBurlesque, arrived unapologetic last weekend. 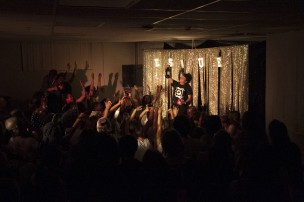 Last weekend, Malcolm X House hosted one of the most breathtaking, wounding, and invigorating pieces of art I have ever witnessed. Laced with humor and joy, sorrow and rage, “ESQUE” constituted a fearless presentation of physical, emotional, and cultural states that does not apologize, mitigate, or sugarcoat. It is one of the most painful and demanding productions I have ever seen. It is also one of the most beautiful, and certainly the truest.

Designed by a group of students in response to WesBurlesque—an annual student performance that addresses the body, sexuality, and notions of desire—“ESQUE” explores and celebrates non-normative sexualities and marginalized voices through various types of performance.

Described in its program as an installation, “ESQUE” seems to exist in a thousand places and modes at once. Combining dance, theater, music, film, and visual art, “ESQUE” might be considered multimedia, but that seems somehow improper. Despite its incorporation of an astoundingly large number of forms and perspectives, the performance never feels disjointed or segmented. It is one singular thing, moving gracefully between acts. Even the interstitial banter between hosts Morgan Hill ’15 and Andrea Vargas ’17 that introduced performers and provided context for installments felt perfectly integrated.

This fluidity and honesty doubtlessly go hand in hand. The material that “ESQUE” interrogates is personal, tangled, and brutal, and the resulting performances are unspeakably intimate. It’s all too easy to forget that these moments are in any way rehearsed or planned, as they seem to spring organically from a ceaseless emotional current. This is performance as conversation, as confessional, as rebellion, and as embrace. When, in an unflinching indictment of rape culture, Karmenife Paulino ’16 asks for help and support, it is not “as if” she is speaking directly to the audience. She is. Every inch of “ESQUE” reaches out into the viewing space and enlists the audience for its journey. When the performers speak, they speak to every individual viewer as opposed to some vague collective. There is a dialogue that is both quiet and deafening, spelled out in the howls of performers, the momentum of musical accompaniment, and the patter of feet and softening of breath that can still be heard even as the dancers leave the music behind.

Those moments of quiet are some of the best in the whole installation, locating the energy of the performances in the natural rumblings of the body. In a segment titled “_EPIDERMAL,” Trouve Ivo ’16 jogs in place alongside a video of hirself speaking about the anxiety of consumer culture, how the ability and right to construct an identity for oneself is bound up in capitalism and privilege. The insights in the video are devastating in and of themselves, but even more so is the sound of Ivo’s breathing and the smacking of feet on the floor. It appears as though Ivo is trying to outrun the encroaching anxiety ze discusses in the accompanying film, but once the film draws to an end, Ivo keeps running. The roar of the music and the dialogue drop away and all that is left is the breathing and sound of footsteps.

In a segment titled “ROOMS,” Rick Manayan ’17 and Paola Maseda ’17 are subject to a similar sort of collapse as the music to which they had been dancing (a beautiful mashup of Perfume Genius and Paula Abdul) fractures and dies while they continue to move as gracefully as ever. Where the audience has always felt comfortable imagining a dancer as guided by soundtrack, it now seems as though Manayan and Maseda had been sculpting the accompaniment with their choreography. The music was secondary. The visceral movements of their bodies had led the way all along.

Though it refuses to ignore the pain and brutality of its issues, it is also a performance run through with a rigorous commitment to self-love, and a buoyant, radiant sense of humor and joy. In one of the production’s most celebratory segments, José Luis Sánchez ’18 asks the audience, “What makes you feel most divine?” What follows is a video montage of the cast answering the question, and then demonstrating those answers. It’s a wonderful moment of light that is both charged by the turmoil of what has come before and seemingly free from it, existing in a warm and brilliant register that promises that nothing that has come before cannot be overcome or, at the very least, transformed. Truly, some of the production’s most poignant moments occur over the course of this film, even if only in the flash of a smile or the beginnings of a laugh. Sánchez’s camera lovingly tracks over the faces of its subjects, basking in the unembarrassed excitement of those little empowering things that have the capacity to stand up to the coldness of the world’s systems and judgments.

Most powerfully, “ESQUE” never claims that the good cancels out the bad, or that one’s ability to feel joy in the face of pain somehow makes that pain irrelevant (as is often the unintentional failure of doctrines of “resilience”). Rather, it forces the audience to hold the two emotions next to each other and to feel their coexistence without hierarchy or narrative.