On Tuesday, April 14, Len Besthoff ’88 returned to the University as the second speaker in the Wesleyan Argus and WESU Media and Journalism Speaker Series. 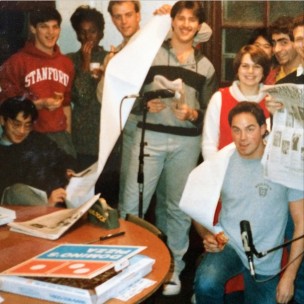 On Tuesday, April 14, Len Besthoff ’88, the Chief Investigative Reporter for NBC Connecticut, returned to the University as the second speaker in The Wesleyan Argus and WESU Media and Journalism Speaker Series.

Besthoff explained how, as a first-year at the University, his love for sports and economics and appreciation for a good story led him into the field of broadcasting. First, however, it led him to WESU, which shaped his journalistic philosophy.

“I just spent so much time working there,” Besthoff said. “You know…you love something [when] it’s just your own corner of the world. You spend so many hours there and don’t even realize it.”

After several months of training, Besthoff developed his own sports and news programs. As a broadcaster and commentator, he would often travel around the NESCAC circuit to cover baseball and soccer games against perennial rivals such as Amherst and Williams.

Besthoff pointed out that he matriculated to the University at a pivotal time for its political and institutional formation.

“I was a student during those massive divestment rallies of the 1980s,” Besthoff said. “There were around 1,000 people [between College Row and High Street] and it was just great to be in the middle of that, interviewing people and reporting on all the protests.”

He credited WESU as the place where he honed his on-air skills and sharpened his journalistic instincts. While he spoke about the pressure of post-graduate life and competing against his peers who had journalism degrees, he emphasized that the University both developed his critical thinking skills and kept his mind open to a variety of professional experiences.

“What I learned at [the University] is so important even in my work today,” Besthoff said. “When I have a complex story that has layer upon layer to it, and I need to boil it down to a two- or three- minute piece, I know I have the tools to be able to create a succinct and informative story.”

After sending out over 80 tapes to various news affiliates in markets as obscure as Tupelo, Mississippi, a friend told him about an opening at WDBJ-TV in Roanoke and Lynchburg, Va. as a business assignment reporter. At WDBJ, Besthoff was able to utilize his economics background to cover business stories with an investigative edge.

He recounted his WDBJ interview, where the interviewer asked him about his knowledge of the Civil War, as one of his most memorable job interviews and his first exposure to the South. While he saw many of his other “Yankee” peers turn up their noses at Southerners and some of their unique proclivities, Besthoff strove to stay connected with the communities he was covering.

His job at WDBJ piqued Bestoff’s interest in investigative reporting. He continued to pursue this facet of journalism as a general assignment reporter for WRAL-TV in Raleigh, N.C., and from 2002-12 as the Head Bureau Chief for Hartford, Conn.’s WFSB-TV. During his years as an investigative reporter, Besthoff realized he enjoyed covering complex events that had critical implications for the communities they affected, such as corruption in the Hartford mayoral office and the Newtown Shooting of 2012.

Given the criticism of media in the age of 24/7 news coverage, Bestoff acknowledged the problematic aspects of local news reporting. He spoke about the way general assignment reporters can enter a community looking for the best story, while not necessarily handling an issue with professionalism and respect.

However, he also spoke about the perks of investigative reporting, especially how in-depth local news coverage and analysis can have a tangible impact on affecting policy changes in communities.

“The best part of my job is when I get to make a real difference in the lives of the people I am reporting on,” Besthoff said. “Local news is a great resource for everyday people to come and speak to us about their problems and allow us to affect change in their communities. When I walk down the street, people say hi to me and talk to me about their lives, and this allows me to develop relationships with the communities I report on.”

In 2013, Besthoff was asked to lead NBC Connecticut’s Troubleshooters, a team of investigative reporters that would pursue long-form and complex investigative pieces in the greater Connecticut area. Besthoff now appears on NBC Connecticut News at 11 p.m., showcasing news stories that often take months or years to unfold. His teams’ reports vary in nature, from exposing identity theft to analyzing the harmful effect of carcinogens in artificial turf fields. The latter later caused the construction of a local turf field to be halted.

After showing a brief clip that went behind the scenes of the Troubleshooters’ work, Besthoff concluded his talk by reflecting more broadly on his career in broadcast journalism.

“Was it a long road? Yes,” Besthoff said. “But was it rewarding and fun? Absolutely. Being from [the University], you guys are all going to do great things and as long as you keep an open mind and go wherever an opportunity will take you, you can’t go wrong.”

This article has been changed from its original version.