Second Panel in Lecture Series Discusses the Physiology of Drugs

The second panel of the “Drugs, Harm and the Campus” lecture series was moderated by the Dean of the Natural Sciences and Mathematics Ishita Mukerji. 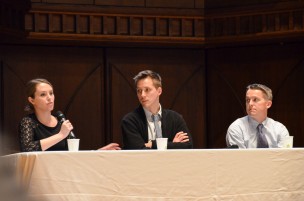 Students and faculty gathered in the Memorial Chapel at 8 p.m. on Thursday April 15 to participate in the second panel of the “Drugs, Harm and the Campus” lecture series. Dean of Natural Sciences and Mathematics Ishita Mukerji moderated the panel while Assistant Professor of Neuroscience and Behavior Mike Robinson, Drug Policy Alliance member Stefanie Jones, and Medical Toxicologist Dr. Mark Neavyn of Hartford Hospital focused on the physiology of drugs and spoke about the science behind recreational drug use and its possible long-term ramifications.

In addition to providing empirical evidence with respect to the effects of synthetic substances, the panelists provided insight into how and why people use narcotics, while also addressing common misconceptions regarding drug safety measures. The professed goal of the talk was not to encourage or discourage drug use, but rather to shed light on reality so that people are able to make informed decisions about what they choose to put into their bodies.

Robinson began the discussion by describing some of the reasons why people engage in recreational drug use.

“We take drugs because we enjoy them, we like them, and there’s a pleasurable euphoric feeling that comes from taking them,” he said. “What they’re doing is very similar to what natural hormones do, so they are essentially hijacking our natural system.”

Robinson went on to address the transition from casual drugs to full-fledged abuse. He explained that although substance use is initially driven by a desire for intense sensations of euphoria, prolonged exposure often leads to increased tolerance of a given drug. With a higher dosage required to reproduce the same effects, the act of taking drugs is no longer done for personal pleasure, but rather as a necessity driven by cravings.

“Contrary to what most people think, liking and wanting…are driven by separate parts of the brain that are highly interconnected,” Robinson said. “With drug addiction, liking and wanting seem to separate, and this separation is critical for the development of drug use, abuse, and addiction.”

After Robinson presented his research highlighting the long-term effects of minimal exposure to certain synthetic substances, Jones stepped up to the podium to explain her work with the Drug Policy Alliance.

“The main thing you should come away knowing is that we’re trying to get society to treat drug use as a health issue rather than as a criminal justice issue,” she said.

Jones further emphasized the importance of harm reduction through drug checking, which is a practice that has yet to receive widespread acceptance in the United States. The state of Connecticut considers drug-testing kits a form of drug paraphernalia, which makes possessing them illegal.

She further mentioned that while such kits are reasonably accurate in detecting the presence of certain compounds in drugs, they are sometimes unable to recognize newer synthetics, and they often do not pick up on compounds present in trace amounts. This means that the only true way to recognize exactly what is in a specific drug would be to send it into a lab for more thorough testing; however, she noted that this method is expensive and inconvenient for potential users.

Neavyn then brought the topic of toxicity into the conversation. He described the ways in which “club drugs,” such as Molly/MDMA, can sometimes have dangerous medical consequences due to their chemical similarity to hormones like serotonin, norepinephrine, and dopamine.

“When somebody takes a drug like Molly, what they’re doing is they’re increasing the release of serotonin up to tenfold,” Neavyn said. “The reuptake of these substances is indicative as well, so you just get a huge flood of serotonin in between the neuron and the synapse, and this is where we see the toxicity.”

As he concluded his presentation, Neavyn stressed the importance of recognizing the signs of an overdose so that people can be equipped with life-saving knowledge if they find themselves or others in a dangerous situation.

After fielding questions from the audience, attendees reacted to the points raised during each of the lectures.

“I think that what Stefanie [Jones] said about drugs as a health issue and not as a criminal issue is what we should be focusing around,” an anonymous first-year said. “We shouldn’t be criminalizing first. We should be creating programs that help people understand the root of what their choice to do drugs is.”

Mikaela Vaneaton ’18 also reacted to the talk, sharing her frustration regarding the emphasis on the physical consequences of drug use without discussing the psychological ones.

“It felt like a very intellectual scare tactic,” Vaneaton said. “But I do appreciate that they gave information about what’s actually happening inside your body.”

Director of Health Education and WesWell Tanya Purdy offered more safety information by highlighting the resources available on campus for people who are considering using drugs.

“We do always take a harm reduction approach to education around alcohol and other drugs,” Purdy said. “Part of it being the reality that we know that some students will choose to use alcohol or drugs and we want to make sure we provide them with information in order to stay safe…. But, having that information and knowing it doesn’t change someone’s behavior, and so that’s where brief therapy and brief intervention come in, so I think it’s important to have all these things in place within a framework and to not just throw all of our eggs in one basket.”

The third and final panel discussion will focus on the policy debate surrounding drug use and will be held in Shanklin 107 on April 28 at 8 p.m.