Members of the Wesleyan Doula Project put aside their politics to provide emotional support for women. 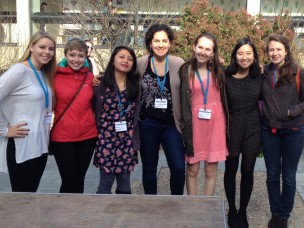 Every Saturday, a group of Wesleyan students drives to a Planned Parenthood facility in New Haven. Protesters, armed with signs, line the sidewalks. The students park and open their car doors.

As the students walk to the door of the building, the protesters begin to scream at them.

“Do you know what they do here?” they yell. “They take your babies.” The students are wearing scrubs, which makes the protesters shout even louder.

Scenes like these are common at Planned Parenthoods across the nation, where the divide between pro-life and pro-choice often makes for visible and angry, even violent, political fighting grounds. But the students walking inside are more concerned at that moment with the patients inside.

The students are part of the Wesleyan Doula Project, a student-run volunteer group that provides emotional support to patients undergoing abortions. As Liz Roche ’16 explained, doulas help the patients stay calm and informed during their procedures.

“We’re there to support the people going through the procedure, kind of act as a bridge between the people working at the clinic and the patient,” Roche said.

Julia Vermeulen ’15, co-leader of the group, said their work is unique because of its focus on patient care rather than politics. According to Vermeulen, patients by law are not allowed to bring family or friends into the procedure rooms, making doulas especially important.

“I think that everyone deserves compassionate care, basically,” Vermeulen said. “And this is obviously a political issue, but I really see it as a humanitarian issue. So whatever your politics are, I think that good, compassionate care is a human right. I think as doulas, we help make that happen.”

What the patients need emotionally differs case by case. According to Alexandra Stovicek ’17, some want to chat while others have moral concerns and questions about the procedure.

“Sometimes, when they get really emotional, they might ask something like, ‘Will God hate me for this?’ or, ‘Did I do the right thing?’” Stovicek said. “And we can’t answer those questions for them, but [we can assure] them that we support them no matter what, no matter their circumstances.”

The doulas react accordingly. Camille Casareno ’15, for example, explained how she often talks with nervous patients about children that they may already have or even about food. She consoles the ones who cry out of stress, and she supports the women who feel guilty.

But the role of the doula is not constrained to talking. Much of the job is about physical comfort and helping the patient through the procedure with as little pain as possible. Casareno, for instance, often places a hand on the patients’ shoulders and holds their hands.

“‘I’m going to be touching you the entire time,’” Casareno said, as if she were in the procedure room. “‘Just so you can hold on.’ And I think 99 percent of people, they love that.”

As with all of the members of the Wesleyan Doula Project, she also helps patients breathe, as failing to breathe properly increases muscle tension in the patients and ultimately makes the procedure more painful.

After they finish with the procedure, which takes between 5 and 10 minutes, the patients go into a recovery room, where they are met by a second doula (students in the Wesleyan Doula Project work in pairs). This doula talks to the patients, making sure they feel comfortable, and provides them with ginger ale.

The Wesleyan Doula Project is relatively new to the University, as is the existence of abortion doulas as a whole. The student group was started in 2012 by Hannah Cressy ’13. According to Casareno, Cressy was inspired by the Doula Project in New York City, which was founded in 2007 as one of the first volunteer abortion doula programs.

Since then, the practice of abortion doulas has slowly begun to spread. The website of the Full-Spectrum Reproductive Support Network currently lists 11 programs in the country, including the University’s, that provide abortion doula services. The Wesleyan Doula Project is the only such student-run organization.

In March, the Wesleyan Doula Project received a Seed Grant from the Patricelli Center for Social Entrepreneurship. Although Vermeulen said the group has not yet figured out exactly how it will spend the money, it has considered providing stipends to coordinators, designing a website, and offering a summer internship that involves applying for more grants.

Some people in the pro-life community criticize abortion doulas for providing a service that traditionally deals with giving birth. Doulas, after all, originated to provide support for women during pregnancies and have only recently expanded to include abortion services.

The practice’s supporters, however, maintain that women receiving abortions need the service just as much as, or perhaps more than, those giving birth, for people receiving abortions cannot be with their family members during the procedure. As Stovicek said, emotional support, along with a little medical assistance, is all the Wesleyan Doula Project intends to provide—and this in and of itself should not be a politically charged issue.

“When we go into clinic, we put our political views aside,” Stovicek said. “We are just there to support women. We really care about that and not judging one another from our different views or not judging women or having any sort of perspective. Every time we come in, it’s just about supporting people who we believe deserve support…. Sometimes it’s hard for people to see that, because ‘abortion’ is such a triggering word, and it seems like there are two sides. There’s this dichotomy between pro-choice and pro-life. But in this case, what it comes down to is just empathy and compassion and wanting to help people who may not have support in their daily lives have a little more support in this hard time.”