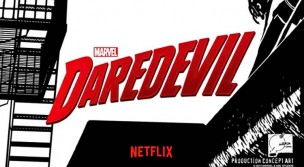 Premiering last Friday exclusively on Netflix, “Marvel’s Daredevil” is a sharp departure from the rest of the Marvel Cinematic Universe. As the first of four Netflix-only series, supposedly leading toward a fifth crossover series akin to the “Avengers” film franchise, “Daredevil” marks a new step for Marvel Studios. Though decidedly separate from the company’s films, it feels indebted to the tone and approach of those movies, both in what it has absorbed and in what it has rejected. Though at times uneven and a little aimless, this newest step for Marvel is perhaps its most interesting and thought provoking. It feels both grounded and risky, reaching for something very different from its feature-film predecessors.

Created by Drew Goddard and Steven S. DeKnight, “Daredevil” tells the story of Matt Murdock (Charlie Cox) who, by night, assumes the mantle of Daredevil, a meta-human vigilante prowling among the water towers and tenements of Manhattan’s Hell’s Kitchen. As a child, Matt was involved in an accident that left him blind, but with each of his other senses drastically enhanced (toxic waste ex machina). With superhuman hearing, smell, touch, and taste, in addition to a fifth “radar” sense, Murdock is able to move like a gymnast through the city, doling out brutal justice to those whom he sees as threatening the integrity of his home. By day, he and his college pal Foggy Nelson (Elden Henson) run a largely pro-bono law office where they represent the various denizens of Hell’s Kitchen who have been abused by the city’s systemic corruption.

At the head of all of this corruption sits Wilson Fisk (a delightful and dour Vincent D’Onofrio), another child of the slums who has returned home to clean up the city by his own brutal methods. In cooperation with a number of mob families, Fisk plans to push out the poor and beleaguered residents in order to hasten a new wave of gentrification. He owns cops, politicians, and industry. He does not play around.

For anyone who has been to Manhattan recently, the show’s portrayal of Hell’s Kitchen might be a bit surprising. During the late 1970s and early 1980s—the years during which Daredevil settled into a darker register than many of his fellow heroes—this gritty feel might have made more sense. This gives way to the series’ first bit of brilliance, and really its only connection to the larger Marvel Universe outside of a number of off-hand name drops. According to various characters, the Avengers’ citywide battle left the neighborhood in shambles, undoing all of the social and economic shifts that swept through New York in the ’90s. When the aliens and Norse gods were defeated and the heroes packed up, there was no one left but the mob to make promises to those standing in the rubble.

By its very nature, this explanation makes “Daredevil” widely oppositional to the grander films under the Marvel banner. Whereas those films are broadly about saving the world from any number of multi-dimensional superhuman threats, “Daredevil” positions the role of the hero as something far less glamorous, far more intimate, and infinitely more gruesome. Even in comparison to films like “The Dark Knight,” from which Goddard and DeKnight have taken a great deal of tonal inspiration, “Daredevil” feels almost blessedly small. As opposed to the high-flying channels of Asgard or the glinting monolith of Stark Tower, Hell’s Kitchen is claustrophobic and breathless. Combat is clumsy and ugly, often ending with an exhausted and battered Murdock stumbling off for medical aid from Rosario Dawson’s Claire Temple, a nurse who rescues him in an early episode and is thus drawn into the mess of his affairs. Even more bleak, however, is the sheer size of the foe. While the Hydra minions in the “Captain America” films may chant that in place of one severed head grows two more, “Daredevil” actually puts that mantra into action. The narrow victories that end each episode are often just preambles for a reminder that there is now one more act of violence for the titular hero to contend with, on the streets or in the court room. Characters can stand up and make speeches about bravery and what’s right, but most of these grand gestures end with someone in a dumpster or at the bottom of a river.

In the wake of DC’s own commitment to grit and humorlessness, another superhero fable stuffed with this little light might seem exhausting. However, “Daredevil” is less a sibling to Nolan and Snyder’s relentless large-scale self-seriousness, and more a descendent of film noir, fascinated with location and relationships. If most superhero films climax with some major threat to some major city, “Daredevil” adds heft to that formula by actually investing in the blood-and-bone, brick-and-mortar character of the city at risk. Furthermore, while London or Chicago or Gotham or New York can always expect an Avenger or a Batman or an Optimus Prime, Hell’s Kitchen is, by its very nature, abandoned. Sure, you have a superhero trying to keep chaos at bay, but he’s a blind man in jeans and an Under Armour top, with a black scarf wrapped around the top of his head. As the show progresses and antagonists become aware of the role Daredevil plays in their plans and rivalries, his existence becomes as much a catalyst and agent of violence as an antidote.

Much of what sets “Daredevil” apart from a film like “The Dark Knight” (or really any superhero film where a villain tells the protagonist that, deep down, they are really the same) is that there seems to be more of an emotional core to the question. In the source material as well as in Goddard and DeKnight’s adaptation, Murdock’s existence is an unending struggle with questions of blame, responsibility, and sin. The episode titles, which drip down in red wax, suggest both the lights of the Church and the blood of God—images that tie intimately back to Murdock’s own Catholicism and the sense of death that seems to track him from an early age. Raised by a boxer indebted to the mob, Murdock is keenly aware of what sacrifices must be made, but also the cost of making them. Certainly Bruce Wayne had to reckon with the death of his parents, but it’s a whole lot easier to convert raw sorrow into an organized idea of justice when your inheritance is in the millions as opposed to the meager winnings on a boxing match gone wrong.

Surprisingly violent and stark, “Daredevil” offers a smart alternative to the majority of stories in the Marvel Cinematic Universe. It’s the other side of the coin, the untold narrative. It’s a smart series that, while still finding its feet, is unafraid to trust its audience with the ugliness that undergirds a number of its arcs. Furthermore, it’s not a program that ever seems to revel in its roughness. “Daredevil” aims for some sort of redemption, even as it ruthlessly accounts for the cost. At times, with all that happens on screen, it may be hard to get too excited about the small victories available, but that just serves to make the moments of triumph feel all the more precious. Whether or not its characters believe it, “Daredevil” suggests unsentimentally, unironically, and unflinchingly that there is the potential for things to get better for people. And if there’s any doubt in your mind, just try to remember when Ben Affleck was Daredevil.