Posse Scholars Join the Class of 2019 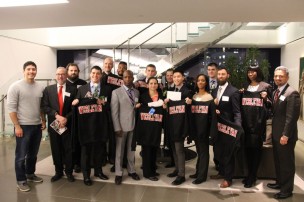 On March 24, the University announced its acceptance of a second group of Posse Scholars, who will matriculate with the class of 2019. Beginning in 2013, the University partnered with the Posse Foundation to recruit ten veterans to each new matriculating class. The first group joined the class of 2018 last fall. The new group is made up of three women and seven men who have served in Afghanistan, Iraq, Bosnia, Italy, South Korea, and Germany. The majority of the scholars served in the Army, while one served in the Marine Corps, one in the Air Force, and one in the Connecticut Army National Guard.

Each class of Posse scholars has a faculty mentor, and Giulio Gallarotti, Professor of Government and Environmental Studies, will serve as the mentor for the class of 2019.

“Our second Posse Vets cohort brings an even more diverse and eclectic group of veterans to Wesleyan,” said Antonio Farias, Vice President for Equity and Inclusion in an interview with the Wesleyan Newsletter. “What continues to impress me is the unshakeable confidence that is backed by academic rigor and a deep sense of duty each of the vets brings to their educational journey.”

The Posse Foundation was founded in 1989 with the aim of identifying scholars who are overlooked by the traditional college application process and supporting them in their matriculation to top-tier schools across the country. It has supported over 5,574 students thus far. The Veterans Posse Program is a new venture, and the University is one of two participating institutions; the other is Vassar College. Eventually, the leaders of the program hope to expand the program to 10 institutions.