The average grade given at the University is an A-minus. So what's the big deal with grade inflation? 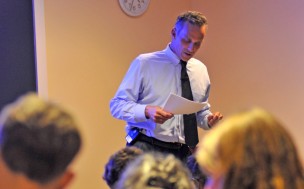 “I hate grade inflation!” University President Michael Roth exclaimed in a meeting with The Argus. “I hate grades!”

Though he was being hyperbolic, Roth is not alone in his contempt for both grades and the fact that they’re rising—fast. In the past decade or so, grade inflation has been discussed with alarm by major news outlets, making headlines everywhere from The New York Times and The Washington Post to The Atlantic and The Economist. Former Duke professor Stuart Rojstaczer has even launched a website, www.gradeinflation.com, devoted to reporting the ways in which GPAs at over 230 institutions have changed over time.

Grade inflation is not new; it dates back to before the 1960s. According to Rojstaczer’s data, its highest rate of change was not recent at all, but was in the late ’60s and early ’70s during the Vietnam War. The New York Times first reported on the issue in 1972, and it became a common topic for Times articles throughout much of the ’70s.

But while the history of grade inflation is long, much of the recent concern has resulted from new data. In 2013, The Boston Globe released information stating that the average grade at Harvard College was an A-minus, and the most frequently awarded grade was an A.

Grades at the University have too followed this trend. Provost and Vice President for Academic Affairs Ruth Weissman said in an email to The Argus that the average grade at Wesleyan in 2013-14 was 89.1, similar to Harvard’s. The average grades in 2012-13 and 2011-12 were similar, at 89.9 and 89.7, respectively. The median grade each year was 91.7.

This phenomenon is concerning to people like Roth, who believe that concentrating grades at the top end diminishes the meaning of A-range grades.

“Grades become meaningless,” Roth said. “The parents believe, ‘Oh, my son Mikey, he’s so great, he got all As.’ Well everyone got all As.”

As grades improve, the range of grading options decreases: in other words, there are fewer possibilities for professors to evaluate their students. Chair and Associate Professor of Film Studies Scott Higgins is concerned that this diminishing scale will hinder professors’ abilities to discriminate among students.

“If an A-minus is the average, we’ve weighted it way up to one side,” Higgins said. “I honestly don’t believe that if you’re trying to find difference between talent, ability, and effort, that you want a smaller spectrum. I think that you want as many slots along the spectrum as possible to judge a student’s work.”

Not everyone agrees, however, with Higgins and Roth. Professor of History and College of Social Studies Tutor, Richard Elphick, believes that he can draw meaningful distinctions among students even within a small range of grades.

“I don’t think the fact that my grades are crunched between B-plus and A means that I can’t distinguish between a B-plus and an A or an A-minus and an A,” Elphick said. “I can, or at least I do in my own mind. It’s just that I don’t really feel that I get that much from students that would warrant a grade below a B-plus.”

Elphick in fact doesn’t believe grade inflation is a major problem at the University, attributing improved grades mostly to an improvement in the quality of students.

“I honestly think that the students that I am teaching now are substantially better than the ones I taught—on average—when I started in the 1970s,” he said. “So I’m quite sure that my grades are higher on the curve than they were 40 years ago.”

Because student work has been improving, Elphick has no problem awarding higher grades to students.

“If we are a highly selective college—and we are—and, two, if our student body tends to be more dedicated in the academic enterprise than comparable student bodies, then you would expect high grades,” Elphick said.

Elphick’s experience, and his grades, has been colored by whom he has taught: many of the students he grades are juniors in the College of Social Studies (CSS).

“Nobody starts out in CSS unless they intend to work very hard,” Elphick said. “Now, in the sophomore year, we don’t give grades—we just comment on papers. But in the junior year, which I’ve taught several times, we do grade. And when I submit the grades, I’m embarrassed. Because they’re all As and A-minuses.”

Roth, however, suggested that although the majority of University students are dedicated, not all are. He cited the class he teaches, The Modern and the Postmodern, as an example of a true range of student performance.

“Everyone in the class is pretty good,” he said. “But some people don’t work at all, and they should get an F. I always have a few of those.”

Other colleges and universities have toyed with that very idea. Massachusetts Institute of Technology (MIT), for example, gives freshmen grades of Pass or No Record their first semester and A, B, C, or No Record their second semester. Roth, partially influenced by MIT’s practice, is interested in the possibility of eliminating grades for freshmen.

“I thought, ‘What if we got rid of grades in the freshman year, like MIT?’” Roth said. “They’re not a bunch of slouches, right?”

Within the University, the College of Letters (COL) does not grade at all; rather, its professors write narrative evaluations for the student. Roth believes that narrative writing is a superior model to grading.

“It’s much more work for the teacher, but much better for the student,” he said.

This move towards narratives in lieu of grades for non-COL students, if only in the first year, is unlikely to occur soon.

“I’ve talked to some people about getting rid of grades in the first year and haven’t gotten much traction,” Roth said.

Higgins, however, pointed out that although he is opposed to grade inflation and the resultant diminished meaning of grades, grades themselves are not entirely useless. He maintains that giving grades can have an impact on student effort; harsh grades, when doled out responsibly, can be motivating.

“If everybody is actually learning and getting an A-minus, that’s fine,” Higgins said. “In my experience, I have seen a connection between the demands I make on students and their ability to achieve. So I have seen a connection between students’ [initially] getting Bs and [their] working to try to understand and struggling and setting challenges for themselves…and the amount that I think they learn and change.”

For those opposed to grade inflation, the final issue is to determine how to fix it. Princeton tried to solve the problem in 2004 through a policy mandating that professors give less than 35 percent of undergraduates grades in the A-range. It abandoned the policy, however, after a faculty committee advised it to do so.

Wellesley College instituted a similar but more enforceable policy in 2004, in which the average grades in 100- and 200-level classes were not allowed to exceed a B+ average, unless the professor writes a letter to the administration. That policy is still in place.

Despite the success of the Wellesley model, Higgins suggested he was reluctant to that idea or similar ones.

“I don’t see any point in trying to enforce [grade inflation issues],” Higgins said. “Or it would be completely artificial to say, ‘Wesleyan now needs to have a B average.’ Which is still high, but, you know—it’s not going to work. But people will resent that and no one will learn more. So how do you change it?”