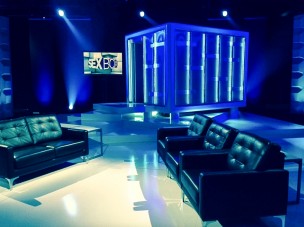 Relationship problems are difficult, often involving personal insecurities, questions of trust, and even past traumas. Due to the sensitive nature of these topics, people are often hesitant to broach them. Partners avoid, ignore, and lie about issues that are bubbling between them—sometimes until it’s too late. Hard as it may be, though, it’s common wisdom that sometimes the best thing to do is just talk, be open, and trust that when you fall the person you love will catch you.

Or you can go on national television and plow inside a box.

Enter “Sex Box,” the new reality/dating/talk show airing every Friday night on WE TV. Adapted from the British show of the same name, which aired on Channel 4 for a little under a year, “Sex Box” is a Kafkaesque sex therapy for the exhibitionist soul. It’s Thunderdome, if Tina Turner was one of three underqualified and over-opinionated panelists who interrogate couples about their coitus only moments after the deed is done.

If this is all a little confusing, don’t worry. Despite its simple concept, “Sex Box” is such a network of bizarre, absurd, and self-satirizing elements that the whole thing seems to fold in on itself, dissolving into bright colors, headache-inducing graphics, and questionable pronunciations of “clitoris.” “Sex Box” unfolds as follows: Each episode, three couples appear on the show, each with a range of problems in their relationships. They sit down for a quick chat with a panel of three “sexperts,” before retiring to the onstage box (also known as the “sexahedron”)—a big silver structure that is somehow both minimalist and garish, as if Frank Lloyd Wright were to design a Miami nightclub—where they proceed to have, no doubt, very uncomfortable sex.

Meanwhile, outside the box, the panelists talk amongst themselves and with the live studio audience (yes, there is an audience) about how they would solve the couple’s problems. After the couple is through with their sexing, they return to the stage clad in silk nighties and bathrobes to let the three people they just met (and were intimate adjacent to) interrogate them about their time in the quickie quadrilateral (trademark pending) and explain what they have been doing wrong. Segments are broken up by “on the street” interviews where “Sex Box” proves that no one is safe from its monolithic quest to ruin all intimacy. After the show, the box is presumably cleaned by a custodian who most likely owes the wrong people a lot of money. If this all seems just a little too screwed-up to be real, you can rest assured. It is both too screwed up and real. Sex Box has its cake and eats it, too (this is a joke about oral sex).

The British program on which WE TV’s new sexual reenactment of Sartre’s “No Exit” is based was, strangely, a well-intentioned show. While by no means non-exploitative, the first “Sex Box” was at least sex positive. It made a point of interviewing couples from all walks of life, orientations, and abilities. Rather than asking them how many times they had been unable to climax, it asked what sex with their partner meant to them. Sure, it was a little stupid in its execution (it did, after all, involve sex in a box) but it was also warm and compassionate.

The American “Sex Box” is a much different rodeo (this, too, is a joke about sex). Yes, the show still puts a premium on openness—panelists constantly restate that the release of hormones during sex causes the subject to be extra relaxed in the aftermath—but really only so that the sexperts can tear them apart. Consisting of Fran Walfish, a relationship therapist with a disappointing lack of fins; Dr. Chris Donaghue, a sex therapist who is introduced as a clinical psychologist over video footage of him doing pull-ups on a playground; and Dr. Yvonne Capeheart, a Florida pastor, the “Sex Box” panel rarely ever asks the couples on the show what they want. In an especially troubling segment, Capeheart and Walfish bullied one of the guests into going against what she had said she wanted based on “body language” that had Walfish’s gills prickling (this is not a sex joke, but a fish joke). The show also deploys subtler bits of sensationalism, such as keeping a timer on how long the couples are in the Sex Box. Lest you doubt it, this is a classy affair.

Perhaps the strangest thing about “Sex Box” (besides the fact that it involves two adults going on TV to have their personal lives criticized after bumping uglies in Abed Nadir’s Dreamatorium) is just how unaware it seems in the face of its own absurdity. A few times, I simply had to pause the show and sit in silence, wondering how this whole Cirque du So-“lay” (another sex joke; gotta keep you on your toes) could push forward without someone just breaking down. At first, it seems like an elaborate prank, then an existential experiment, then the nightmare of a middle school boy brought to life. Never, though, does it seem like actual television. Sure, maybe the straight-facedness of the major players is an attempt to appear legitimate at all costs, to stave off complaints of exploitation or smuttiness. Or maybe, it’s that a group of people actually sat down and wondered what the world would be like if we could enjoy the spectacle of two people exiting a bang-brick on television, knowing that they’d just done the nasty. If there’s any one moment that sums this program up concisely, it’s the beautifully awkward shots of techs running up on stage to greet the recently sexed guests in order to pin mics on the lapels of their post-coital lounging gear as they flee the confines of the lube cube.

Is “Sex Box” great television? No. Is “Sex Box” good television? No. Is “Sex Box” television with any merit whatsoever? No. It is, however, like nothing I’ve ever seen (counting its predecessor). Since I saw the trailer for this program, I have awaited its premiere with what can only be described as religious devotion, and was not disappointed. Sex Box is perhaps the strangest thing on television right now, and, I would say, worth at least 42 minutes of your time, if only to convince yourself that it exists so that you may move through this world knowing that we as a species have peaked. “Sex Box” is indefensible, and most likely unsalvageable, though if they want to class it up a bit, they’re welcome to go with my idea for an alternate title: Sepulchre of Stank.